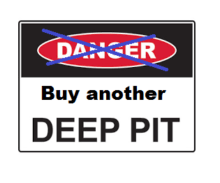 M&A in the Marketing Services sector is a bit like archeology; if you find yourself in a hole, keep digging! This is how companies such as Publicis, can propose to invest a further $4bn on another digital marketing acquisition, notwithstanding presiding over an eroding organic top line and sub market ROIC, notwithstanding splashing out over €5bn on similar propositions in the last 5 years.

How can this be, one might ask? Well it’s quite easy really; get investors to conflate EPS growth with value enhancement, while exploiting deficiencies in the way certain consumed assets are treated between the various stakeholders. For marketing services agencies, this in large part revolves around the treatment of the principal asset class, intangibles, which represent their intellectual capital and future growth investment. To keep pace in a fast changing market requires substantial investment in new marketing skills and areas, but it makes a significant difference as to how this is funded. Do it in-house and you’ll be expensing the costs off your reported profits and margins, but buy someone else’s investment and these costs will initially appear as a capital item in the balance sheet as an intangible. While accounting standards try an recognise that there will be a subsequent consumption of this asset that needs to be recognised at an expense through the P&L, this amortisation is often set over an arbitrary 15 years, which may bear little relevance to the actual consumption and is therefore generally ignored, notwithstanding that tax relief is also often extended to this amortisation expense. Roll in a cheap interest funding environment and accompanying tax shields and it is therefore not difficult to see the relative appeal of such an acquisition growth model relative to internal investment.

The problem however, is that an ‘adjusted’ ROIC may well be substantially over-stating the real ROIC, while forcing the company on an ever-increasing acquisition treadmill in order to maintain the illusion of growth and accretive shareholder returns.

So let’s get back to Publicis’s offer for Epsilon. At first glance, the terms don’t look too demanding on the data supplied so far. This includes an adjusted EBITDA for FY18 of $485m on sales of $1.9bn, which even assuming depreciation running at approximately 3% of sales (vs 1.7% for Publicis), might suggest EBITA approaching $430m for last year and possibly about $450m for FY19 (completion estimated for Q3). The announced cost of Epsilon is reported at $4.4bn, although after including the amortisation tax relief, the NPV is reported to be $3.95bn. At this stage, we don’t know what funding arrangements are planned, but the proforma EBITA yield of approximately 11.5%, should be well over double this rate and explains Publicis’s guidance that the acquisition’s first full year contribution in FY20 is expected to add over +10pps to group adjusted EPS. Applying a normalised tax rate of 21% and cash conversion of 90% and this would suggest a normalised OpFCF yield of just over 8%, implying a growth discount of under +1%. Publicis hasn’t reported on the recent growth record of Alliance Data’s Epsilon division, but one would have thought that it ought to have been higher than this.

So whoopie for Publicis; another great acquisition? Unfortunately, we’ve been here before and all too often. Over that past 5 years, Publicis spent a net €5.2bn on buying into strategically growing digital marketing businesses. In addition to the disappointing organic revenue growth figures already referred to above, which suggests either they bought duff businesses or that the core operations have tanked, the EBITA ROIC is not very impressive either. Assume EBITA on the core operations delivered no more than inflation levels of growth, then the implied pre-tax ROIC (EBITA) has come in at only 3.7%, hardly adequate to cover interest costs in even these QE supported markets. Assume the core operations managed to keep pace with the market’s longer term real growth rate of +2% RCAGR, then the implied acquisition ROIC drops to a miserable 1.2%.

These ROIC analyses however, do not assume any of the acquired intangibles (most of the €5.2bn of expenditure) have subsequently been consumed. Given the depressed rate of organic sales growth one might argue that it ought never have been valued at this level in the first place, but either way one should be recognising a substantial charge. Often, companies will slip through an impairment charge and claim it to be ‘non-cash’. However, unless the original vendor is offering to reimburse some of the original acquisition costs, this doesn’t seem a particularly compelling explanation or excuse.