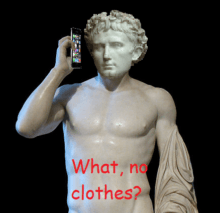 Those following Alphabet’s Q2 results may have noticed the changing mix driving revenues. While year-on-year organic revenue growth is still comfortably holding above +20% pa, it is increasingly driven by accelerating growth in paid clicks which are offsetting a higher rate of decline in the price per click that it receives. Given the auction basis on which click costs are determined, this might just be a reflection of increased inventory hitting a slowing market as advertising demand reflects a more cautious outlook for consumer expenditure while the Federal Reserve was flip-flopping on its interest rate message to markets.  If so, then the more recent dovish stance at the last FOMC might encourage some to expect a more positive rate outlook into Q3. Results from Unilever and now Procter & Gamble (P&G) however, suggest a more worrying aspect to this decline in yield; low advertising effectiveness and ROI.

As anyone who has actually managed an online advertising campaign could tell you, this deterioration in online advertising effectiveness is hardly new, just that when two alpha marketing groups spell it out to investors it is increasingly difficult for financial markets to keep on ignoring. More importantly perhaps, it also becomes more difficult for agencies and digital platforms to continue pushing expenditure on CPC when all that really matters is effectiveness and measurable ROI.  Tools such as Google Analytics can quickly alert you to a rise in bounce rates, which when the duration on the site is only 0.00 seconds suggests either a rise in accidental clicks from fat-fingered mobile users given the (deliberate?) placement of adverts or just simple click-fraud. When this occurs, then one can quickly lose faith in the digital advertising sales executive who is trying to persuade you to keep spending.

For P&G, as already with many smaller marketers, the decision was simple, just cut it! In Q2 the group added +80bps to its operating profit margin by cutting over $140m from its digital advertising budget. More worrying for the digital advertising industry, P&G saw no appreciable impact on its sales trajectory from doing this. While this might seem a blasphemy to the industry, where digital engagement with customers has become a mantra, what P&G has done is reveal how few clothes are on the emperor.  Investors are inundated with data on reach, duration clicks etc, but when was the last time you actually saw quantitative data on advertising effectiveness and ROI comparatives? Financial analysts therefore basically don’t have a clue about the relative effectiveness of the various advertising platforms out there on which they are basing valuations that often have to reach out to revenue projections five years hence. Advertisers meanwhile are left to fend for themselves to ‘suck-it-and see’, which given the shifting (and hidden) algorithms used to serve these adverts means past responses are often of limited use in planning future campaigns. Financial analysts might assume that rising demand for clicks implies a market assessment of the relative ROI for that platform which can be used as a basis for longer term usage and revenue projections. What P&G is showing, is that this is largely bunkum.

This is what P&G CEO Jon Moeller had to say on the subject at the recent Q2 results conference call. The full transcript can be accessed here at SeekingAlpha.com

“In the fourth quarter the reduction in marketing that occurred was almost all in the digital space. And what it reflected was a choice to cut spending from a digital standpoint where it was ineffective. Where either we were serving bots as opposed to human beings. Or where the placement of ads was not facilitating the equity of our brands.

Importantly, as we made those decisions and put our money where our mouth has been in terms of the need to increase the efficiency of that supply chain, ensure solid and strong placement of individual ads, we didn’t see a reduction in the growth rate. So as you know we delivered over 2% organic sales growth on 2% volume growth in the quarter. And that, what that tells me is that that spending that we cut was largely ineffective.”

In a recent post I referred to the macro implications of the poor digital ROI measurement and an overall expenditure level in the US that has been supported by cheap money (ergo what happens when/if this reverses?).  From a macro perspective, if digital advertising is more effective than traditional analogue and digital media consumption is increasing, then one might expect an improving rate of advertising ROI over the post 2009 recovery period.

Wrong!  From the below data one sees the opposite, as advertising expenditure as a percentage of personal consumption has actually been rising slightly this cycle as opposed to the erosion from 2004-08.  If you’re spending more on advertising than you’re getting back in sales, that’s what I would call a reduction in marketing efficiency. While cheap money may make the sums add up on a marginal ROI basis for an increase in overall budget, this will only apply while funding costs remain super-low. Change this dynamic and like P&G, many other advertisers may be tempted to cull their increasingly inefficient digital budgets. 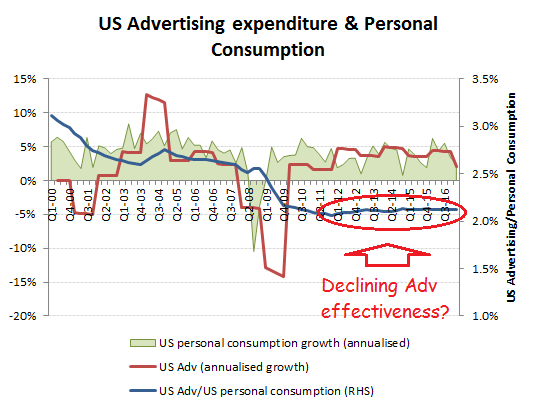