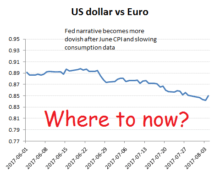 The problem of communicating a softening macro outlook is that it lowers interest rate expectations which in turn is a buy signal for not just investors, but also recruiters.  So while the IMF cut its US GDP expectations for 2017 and 2018 by -20bps and -30bps respectively (both now to +2.1%) and currency markets have ‘drumfped’ the US dollar, this doesn’t seem to have deterred US jobs formation in July, which came in at a respectable +205k for the private sector.

By industry, the service sector has once again driven this growth, particularly in Leisure & Hospitality (+62k & +4.7% annualised) and Temporary help (+15k & +5.8% annualised) categories. The recent drop in the US dollar meanwhile, following the softening rate expectations and as Trump’s conflicts with Congress and Mueller’s Russia investigations come to a head, hasn’t provided much of a stimulus to manufacturing jobs yet, which with a MoM increase of only +16k, represent an annualised rise of only +1.5%. 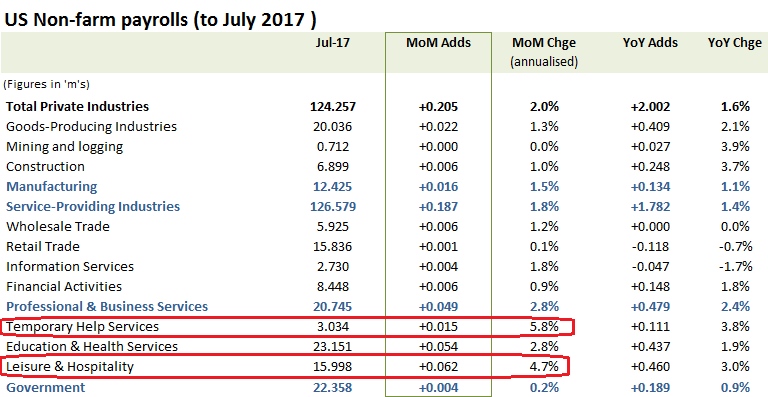 The rising proportion of Bar staff and temporary workers though haven’t hurt average hourly earning too much, which edged up by +0.34% MoM, an annualised increase of +4.1%, albeit an actual rise on July 2016 of +2.8%. On an actual year-on-year comparative and including the +1.7% rise in private sector employment, this suggests an increase of approx +4.6% for total YoY US private sector earnings in July.

Representing around 31% of overall US GDP, this +4.6%/+$0.3tn (annualised) increase in private sector earnings accounts for only +1.4ppts (or 37%) of the +3.7%/+$0.7tn advance in US GDP, which again highlights the reliance and sensitivity of overall consumption and GDP expectations to the availability of cheap money to keep the party going. As can be seen from the below chart, outstanding credit now represents a significantly higher proportion of US personal consumption than it did even at its 2008 peak.

With total non-financial debt to GDP approaching 260%, it doesn’t take a genius to imagine the potential impact of even a +100bps rise in rates, particularly should this be leveraged through rising savings ratios and possibly falling employment, which explains the market’s (and Fed’s) neurosis on how to deflate this debt bubble in an orderly fashion. The one obvious and least painful route is from accelerating growth in output, albeit this was the argument put forwards by those originally feeding the bubble with yet more debt and ahead of what has proved to the most anaemic recovery since WW2,  So much for the Keynesian multiplier effect! Indeed, this was the very same rational under-lining the ongoing attempts to refinance Greece and we all know how well that’s turned out. 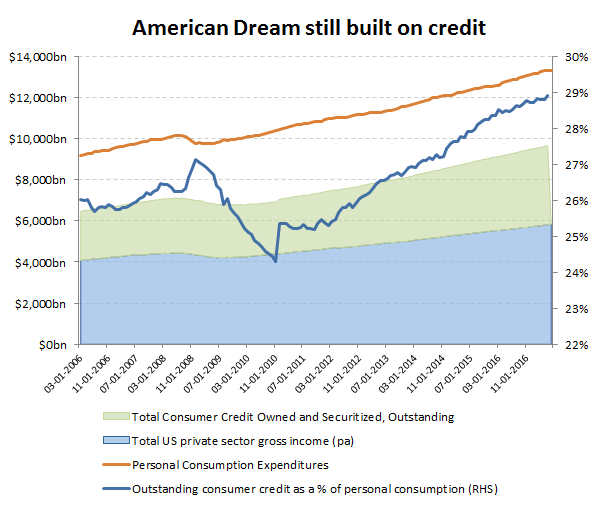 Trapped in a debt spiral

In more normal political climates, a robust NFP jobs numbers after series of more negative macro data points on economic growth and inflation might be expected to harden expectations for a September rate hike and with it the US dollar after its recent reversal. These are however anything but normal times, in terms of both debt exposure as well as for political events, with a Congress at war with the President over the as of yet unproven Russian ‘hacking’.

While incapable of passing the crucial reforms on Tax and Healthcare, Congress has found almost unanimity in forcing through a sanctions bill that threatens to further sour its trading relationships with allies such as Germany over ventures such as Nord Stream 2. Trump’s Attorney General (Sessions), having recused himself from the Russian investigations, meanwhile appears to have allowed his Democrat appointed deputy to appoint a special counsel (Mueller), who while not only highly conflicted himself from his close relationship and friendship with ex FBI director Comey, has been steadily packing his team with known Democrat supporters and contributors. Either this is an incredibly cunning and secret plan to turn the investigations back on Clinton (Uranium/hacking/leaks/FoB, etc), Lynch/Bill (the ‘meeting’, un-masking), Lynch/Comey (the ‘Matter’) etc, etc, or else Trump is being set up by a Kangaroo court to neuter and delegitimize his presidency, or perhaps even attempt to impeach him from office. Unfortunately, without any evidence to support the first scenario, one is left with the second and the prospect of political paralysis on the long-overdue economic reforms. With Mueller setting up a grand jury and Congress threatening what looks to be legislative over-reach with a Bill to restrict Trump’s authority over the investigation and Mueller (despite him coming under the jurisdiction of the DOJ), this farce might carry on for another 18 months. If tax and healthcare reform is stalled in the meantime, then the IMF may need to get the red pen out again on its GDP forecasts and Yellen will need to hold off on the rate rises.