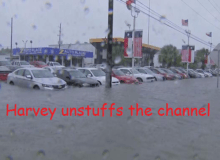 GM provided the standout in August, with its heavy incentives clawing back some of its earlier shortfalls in sales to deliver a +7.4% YoY improvement in domestic unit sales for August and bringing its YTD average to -2.4% and therefore slightly ahead of the overall industry’s -2.7% YTD decline as well as its principal domestic rivals Ford and Chrysler (FCA).  It was not enough however to seriously skew the downward trend for overall industry sales, which was down -1.9% YoY in August to 1.483m units.  All this however doesn’t help to explain the +14k MoM increase jobs announced for August by the BLS for its ‘motor vehicles and parts’ industry segment. With unsold units piling up in dealer forecourts, one might have expected cutbacks in manufacturing capacity, rather than an increase, so perhaps the hiring was in marketing and sales. If so, then one might expect a subsequent reduction once inventory levels are back under control.

This however, may not be the case in Texas and after an estimated 500k cars that may need replacing after hurricane Harvey! 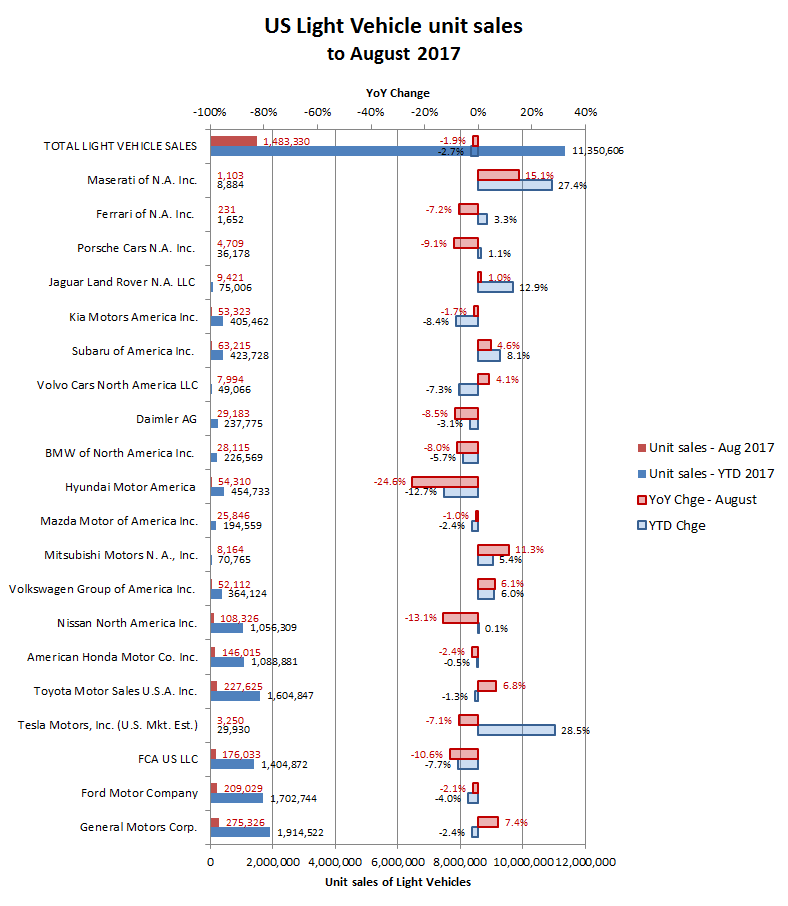 Back in Europe, the party must carry-on, particularly across the election season, with fractious consumers and Governments supplied with super-easy credit and savings discouraged with NIRP. With ECB continuing to goose credit markets and consumption, borrowing and car sales continue to expands ahead of incomes, albeit with some softening possibly finally emerging into the end of 2017.

While still struggling under mountains of debt and unresolved structural deficits, this has not deterred unit car purchases in the first six months of 2017 in countries such as Portugal (+7.2%), Spain (+7.1%), Italy (+8.9%) or even Greece (+6.2%)!

By manufacturer, the greater focus on cars rather than light trucks and SUV’s provides for a different mix of winners and losers in the first part of 2017, although Jaguar Land Rover features well on both sides of the Atlantic. VW meanwhile also managed to deliver a positive performance across both markets, albeit perhaps more a function of cycling against the emissions scandal in the prior year. 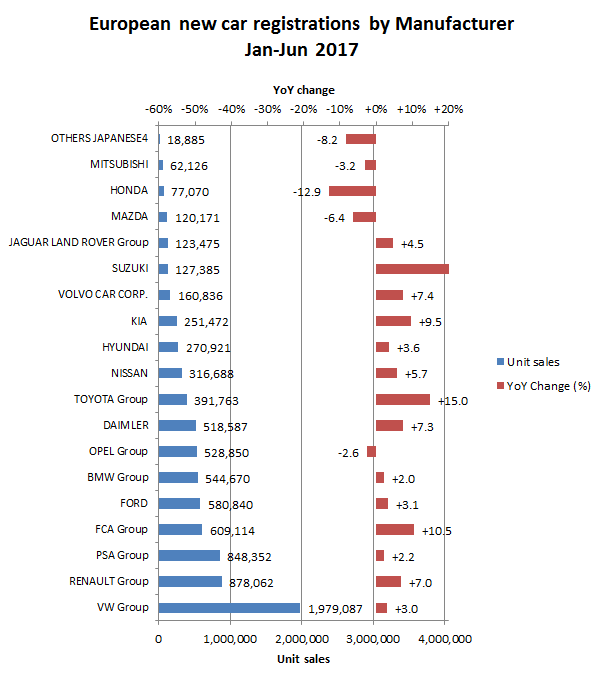