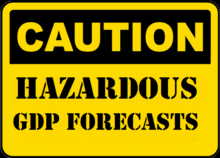 A flattening yield curve is often taken as a bad omen for prospective GPD growth, so according to this theory, surely the increasing divergence in rates across the maturity range is good? Hmm, well actually no, as yields also diverged, while falling in the 2-3 quarters immediately preceding the last two recessions. Perhaps horse and stable doors should be the appropriate analogy once one’s noticed a flat yield curve. The real message here is that if yields start falling and diverging after a period of flat yield curve, beware and don’t believe the official GDP data. Yields may be dropping because central banks are panicking again, while trying to encourage more ‘borrow and spend’, but at just the most dangerous time!

During the last gasp of the dotcom bubble in 2000, the yield curve had also flattened out for most of that year, but it wasn’t until later in 2001 and after 2-3 quarters of falling and diverging yields that the the recession actually hit the fan

By the time central banks realised the problem and started to pump liquidity back into the system, it was too late. You might notice that in the below table I have not just shown the final GDP estimates produced by the BEA, but also the initial ones, which highlight that at the time, the economists were trying to pretend that GDP was merrily growing all the way up to Q3 2001, whereas the revised data reveals that it was in fact in recession from Q1 of 2001. Am I being overly conspiratorial here in suspecting that central banks were manipulating the initial published GDP data in order to try and support investor sentiment while all the time desperately pumping credit into the markets? For those suckered into leveraging up to maintain investment spend into the jaws of recession, hopefully they were less gullible in believing the official narrative when we had a repeat performance a few years later in 2008!

The last recession once again saw an extended period with a flat yield curve up to the middle of 2007, but with the full impact and realisation of the depth of the recession delayed until the second half of 2008. Once again it was the fall and divergence in yields as policy makers attempted to react that immediately heralded the recession.

Once again a period of flattening yield curve was followed by falling and diverging yields as the monetary taps were opened and once again the initial estimates of GDP growth failed to confirm the actual onset of the recession. Of course, if central banks were being honest about the state of the economy, they might have found it difficult to foist the additional credit onto borrowers to support the reflationary policy. At the time, I remember relying on the considerably more accurate non-farm payroll data for job formations rather than the noddy GDP figures. After the highly suspect construction of the much lauded Q1 2019 initial GDP growth of +3.2%, perhaps we never learn!