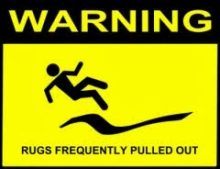 We are approaching what may prove to be a formative FOMC meeting on 15-16 March. After earlier macro growth fears out of China and a widening cadre of central bankers going full retard with NIRP, there has been a growing assumption by markets that the Fed’s planned monetary tightening is all but dead. Anything not supportive of this narrative meanwhile seems to have been ignored by the main media. Only a few months ago, US non-farm payroll data that showed a robust pace of job formation as yesterday’s February data did (more below), would have been screaming headlines suggesting  more rate rises were back on the agenda, but not this time. Are we sleepwalking into another correction in equity markets as desperate oil producers try and talk up oil prices (on what the Iranians referred to as a “ridiculous” plan being proposed by the Saudi’s to curtail supply) and promises of ever more liquidity stimulus and competitive currency devaluations?

Markets seems to be adopting the Panglosian approach, but like the fictional character in ’Margin Call’ all I hear is silence. In my experience, silence is never good.

Think where we are in the classic banker credit cycle that has been in use for over 300 years. By that I mean the one where first you create or get control of a currency or credit market, then encourage borrowers to load up on debt from you in that currency, which in turn feeds the usual asset bubble. When it becomes over-extended, loans are called in and the prices crumble. As the only one left with any money/credit (well you created it anyway!), you then step in and acquire these distressed assets at pennies in the pound.  As the controller of the world’s reserve currency, the Fed is that banker. It has flooded markets with its fiat currency and liquidity, which has funded its various social and military adventures. However, now that every other Tom, Dick and Harry central bank is also playing the same game, and only possible under the Fed’s auspices, they have made themselves incredibly exposed to the Fed taking back its train set. The market’s assumption is that the Fed will keep the party going indefinitely, but we all know that simply won’t happen, unless it wants to go down with the ship. Markets need to think ahead and anticipate what happens if US rates continue to edge up.  Remember, this is a primarily domestic economy. A few percentage points on interest rates is not going to be a game changer for the US economy, while the competitive penalty of a high US dollar would just make further tariff increases just more likely. For those thinking they can sustain NIRP and QE against a stronger US dollar and interest rates as their economies wilt will be in for a rude awakening indeed.

So why the deafening silence on what should be a pivotal data point in determining the current health of the US economy and therefore its potential resilience to a possible resumption in US monetary policy tightening?

Notwithstanding the usual caveats on over-interpreting small movements in the heavily seasonally adjusted and revised data for the early months of the year, February’s numbers are not too bad and do not suggest the softer overall GDP number reported for Q4 2015 is matched by cutbacks in confidence by job creators. In terms of overall numbers, total MoM job growth of +242k (and +230k for Private) in February was above the 3 month average of +228k, despite the figures for December and January having been revised up by a total of +30k (from +262k to +271k for Dec and from +151k to +172k for January). Average wage growth was a little softer (both from average hours and average wage growth – a function of the higher mix of retail and service jobs created) than for previous months, although remains ahead of inflation and the further reduction in temporary jobs is a positive trend. For currency watchers, the small reduction in manufacturing jobs after previous increases raises a warning flag on competitive currency devaluations, although given the current pre-election political climate this seems to argue more for a tariff response rather than as a deterrent on further rate rises. 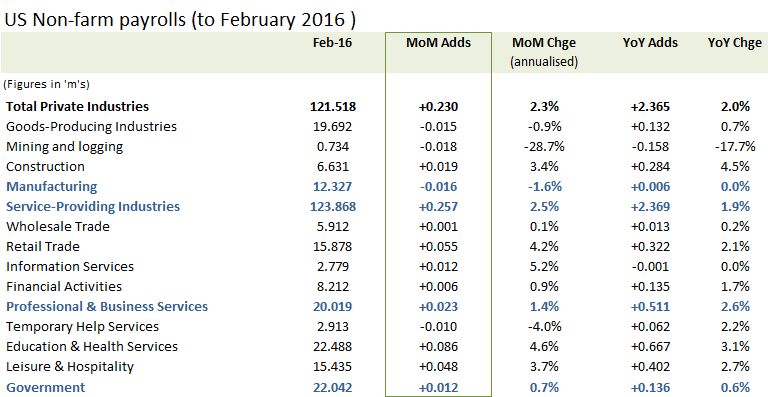 Another solid month for job creation in February

Income growth is slowing, as average weekly hours dip -0.6%/-12 mins from January’s 34.6 hrs to 34.4hrs and average hourly earnings are trimmed by -3c from January’s $25.38/hr to $25.35/hr. On a year-on-year basis, this took January’s flat Av hours to a YoY decline of -0.6% while trimming the average weekly wage growth from +2.2% YoY in January to +1.6% in February. With a robust +230k rise in private sector MoM job growth in February, the YoY increase in employment in February was almost identical to January’s +2.2% increase, although against the softening average wage growth, total private sector income growth edged down in February from January’s +4.4% to +3.8%. 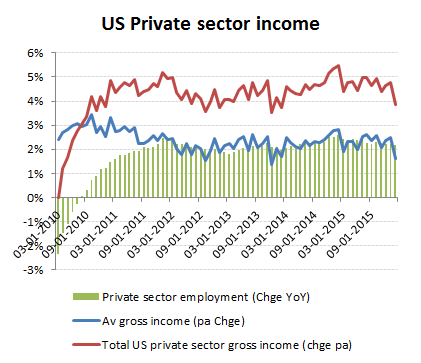 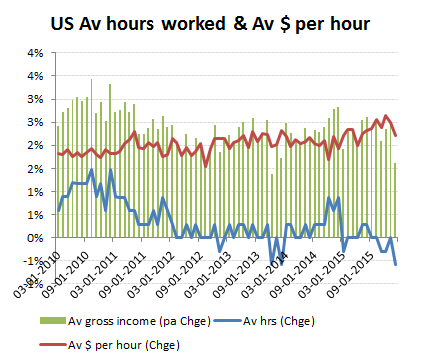