Amazon through the growth prism

Markets often distinguish growth from value, but for an equity, growth defines value. For most stocks, this can be seen by the close relationship between the organic revenue growth being delivered by a company and the implied growth rating being discounted by the share’s operating FCF yield. A problem however arises when trying to price in an above market growth rate in perpetuity or worse, a growth rate higher than the cost of equity. Markets understand the impossibility of sustaining both scenarios so will inevitably reach out to some sort of horizon point where the valuation will revert back to discount a market average, or below, rate of growth. The question for investors therefore is whether there is a systematic relationship between this mean reversion point and a group’s trading performance over a realistic forecasting horizon.

The encouraging news for the investor is that markets do seem to behave rationally in the way they reach out to a valuation horizon and in a way that can also be incorporated into a predictive tool. Markets value stocks on a near term horizon of <18 months unless organic revenue growth exceeds double the market average, from which point the horizon point is progressively extended in direct relationship to relative organic revenue growth. Instead of scratching your head over whether a PE ratio of 150x or 200x is cheap or dear, view your ‘super-growther’ from a growth prism and one can start to see how markets have really been discounting their growth prospects. This can only be seen at www.growthrater.com and is included in our valuation algorithms.

An example can be seen with Amazon.com and a chart that is available for registered users at:

The chart looks at the mean reversion profile of how far out the markets are reaching in their valuation horizons to bring the company’s growth rating back to a market average. The orange line is the company’s organic revenue growth rate with the green bars being the number of months that the markets are effectively reaching out to revert the growth rating to a market average. A correlation and Rsq is also included in the chart on these two series – currently approx 0.75/0.56 on the period selected, which is not too shabby. The blue bars denote the forward reach that is calculated automatically within my valuation algorithm. As you can see, I have a max horizon of 50 months as a cut-off which is less gung ho than obviously the market at present is reaching out by, although I have been through too many bubbles to be comfortable in pushing the envelope. 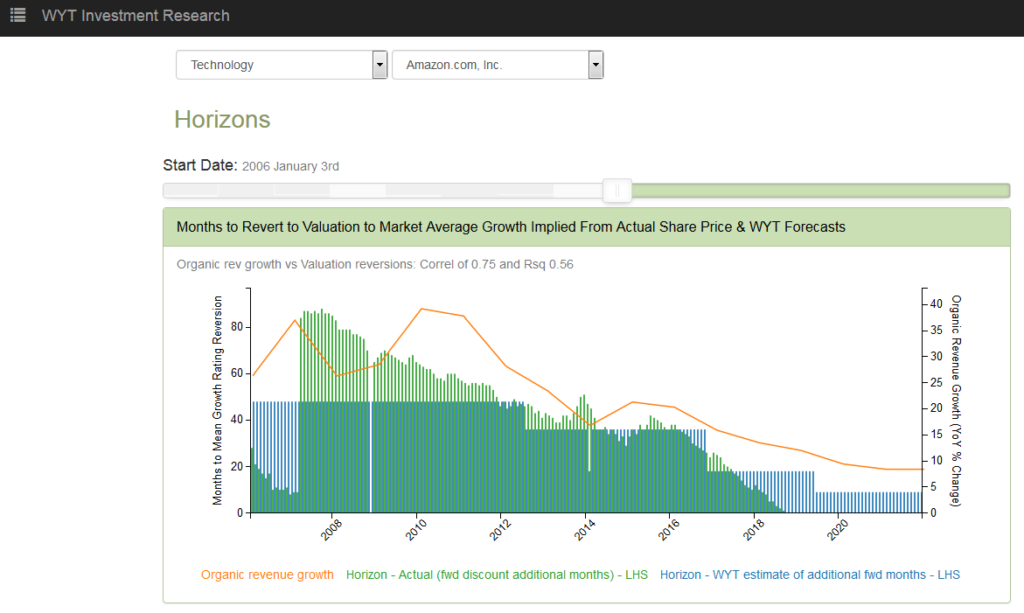