“Omnicom demonstrated superior and proven performance in the area of data analytics, planning and buying, innovation, talent and financial value”  – P&G global brand officer Marc Pritchard on last week’s announcement that it will be replacing Publicis Groupe’s Starcom Mediavest with Omnicom’s OMG for its North American media-buying, worth around $2.66bn pa.

While the last item on Mr Pritchard’s list may have been the primary criteria on the account move, this is still a pretty damning criticism of the lack of perceived value that Publicis has been able to garner from its over $5bn of largely digital acquisition expenditure over the past 5 years;  a level over 5 times that of Omnicom, its putative merger partner in 2013/14.  And it is not as if this is a one-off event, but a culmination of two years of account defections by some of the leading US marketers including General Motors, Microsoft, Disney, Anheuser-Busch and Coca Cola. As a consequence, Publicis’s earlier guidance for a second half recovery in organic revenues is again going to be missed, which is the second year for this.

Publicis’s credibility issue has therefore just got a lot worse. The previous narrative that heavy digital investment would position it with leading positions in faster growth markets has simply not delivered and the group has yet to explain how the new reorganisations will resolve this. Unfortunately the sequence of events from the proposed nil-premium merger with the supposedly digitally weaker Omnicom ahead of the slowing revenue profile and then the share placing in March 2015 by the controlling shareholder, while still guiding for a second half pick-up may be open to many interpretations and not all of them particularly flattering or encouraging for investors to keep on taking too much on trust.  After the account losses, organic revenue growth for FY15 is now expected at only around +1% and this will also blight most of 2016, until SapientNitro can start to be included in the organic calculation. 2017 should hopefully mark a recovery year, although this will remain sensitive to showing that all that digital investment can translate into some seriously positive new business activity, otherwise we could be staring at an equally impressive, albeit by then relatively meaningless, series of impairment write-downs.

The relevance for investors is that the shares need to reach forward to this ‘recovery’ in 2017 organic revenue growth to support the growth rating. To demonstrate this we have pulled a chart from our GrowthRater analytics service and repeated it below 4 times with annotations to explain the relationships.  The chart includes 3 data series; one for organic revenues as an expression of growth being delivered (both actual and forecast), the second for the growth rate being priced in by markets in reward for this performance (our GrowthRating) and the third being the relative share price performance (in this case versus the CAC40) for the shares.

First let’s look at the trends for organic revenue and growth rating for Publicis over the past decade which has averaged approx. +3.5-4.0% pa.  Ideally one should try and buy growth when its being sold below the growth that’s being delivered.

Looking at the historic relationships, from 2009 to 2013, the shares were not only discounting sub-trend growth (ie structurally under-valued), but also significantly below the organic revenue growth also being delivered (ie also offering positive shorter term momentum). Undervalued on both measures, the shares were cheap and unsurprisingly continued to outperform strongly against the market. 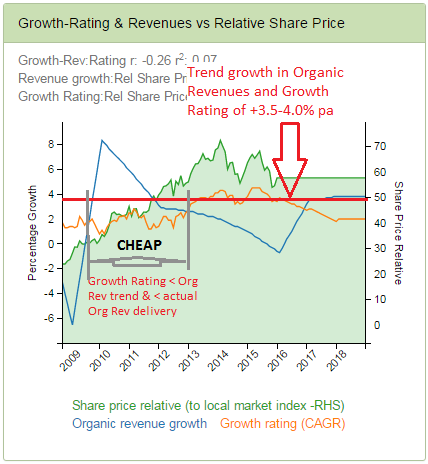 In the subsequent period the organic revenue growth being delivered dropped below the growth being priced into the shares in early 2013, although this growth rating remained below the longer term trend until the end of that year. In other words, the valuation was still on the right side of the trend, but was facing a deteriorating short term momentum on delivery, at least until the year end of 2013.

From the end of 2013 however the shares were discounting above trend growth while at the same time organic revenues were deteriorating to well below this level. In other words the shares were expensive relative to both long and short term criteria, signalling a poor value and risk proposition. In these circumstances, the predicted relative share price underperformance by the model was confirmed. 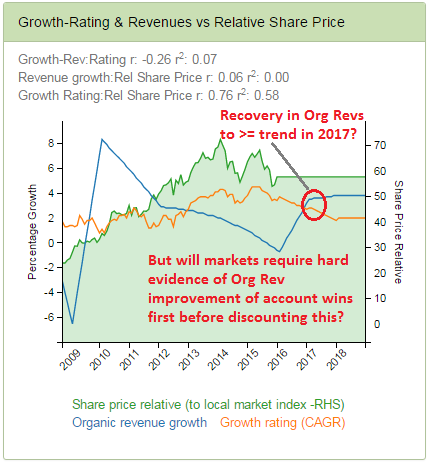 Publicis – Potential Org Rev ‘recovery’ in 2017, but when will markets start to anticipate this – the credibility issue!

This therefore brings us back to the issue of management credibility as we look forwards into 2016 and 2017. Momentum from account losses and further potential disruptions from reorganisations means that investors will need to look out into 2017 before organic revenues might recover to above both the current growth rating and the growth trend. In normal circumstances and normal times, a charitable market might give management the benefit of the doubt.  These are not normal times however and barring another surprise merger announcement to bring in a fresh management team, Publicis’s record may require them to start to deliver actual progress on account wins first before we’re prepared to reach out that far.

A lot more on this, including in our GrowthRater analytics section where you can also remodel the valuation on your estimates for organic revenue outcomes.  Limited free Beta trail subscriptions are currently on offer, so apply now while they remain.

Amazon through the growth prism