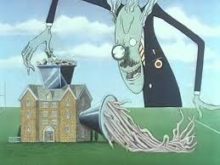 For those of you with the GrowthRater web App, the somewhat sorry tale of Pearson will be old hat and you’ll have been out of the path of this train for some time now, as can be seen from our valuation timeline below. Unfortunately for Pearson, media investors seem to be particularly intolerant to disappointment or in accepting that a root and branch digital restructuring of your business model during a cyclical and structural down-swing is unlikely to fit neatly into a three year investment cycle of spend, stabilise and recoup. 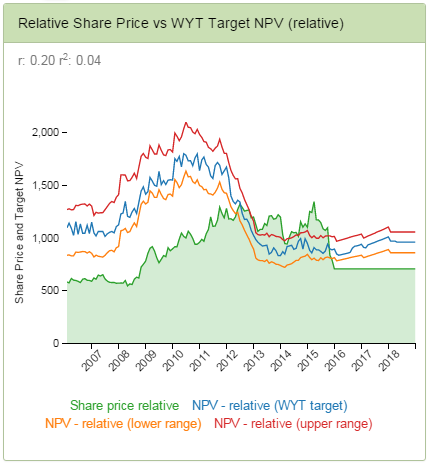 Pearson however have not helped themselves. After 5 years of basically no organic revenue growth a straw was provided at the H1 FY15 results in the form of a +3% increase in deferred income which was eagerly grasped by some as evidence that the corner was being turned and the group was finally on a path to growth after so much new digital product investment. What was grasped however was a falling knife as Q3 organic revenues subsequently fell by -4% as everything from soft US College enrollments, book rental competition to emerging market recession left College publishing organic revenues down by a whopping -6%. Suddenly it seemed like investors could be facing a 6th year of contraction and that was enough for many, although the subsequent crunch in the shares looks somewhat extreme, taking it well below the lower end of even our +2.5-4.0% project growth trend. Even on our sub-market forecasts, the market is now valuing Pearson as a sub +2% growth business. Fair cop on what they’ve been up to and the immediate outlook, but is this really all the ‘great’ Pearson Education can muster? 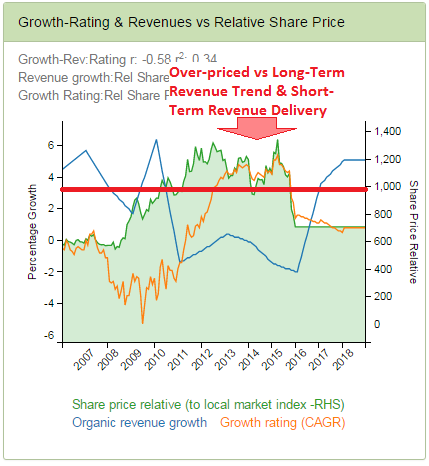 In the above chart that we’ve pulled in from the GrowthRater Analytics section is the Pearson relative share price performance against the record of organic revenue growth and the Growth Rating.  As with any stock, we need to break out from under the market’s recency bias and establish a realistic base of trend growth as well as a time-frame for potentially getting there.  For the former, our +2.0-4.0% pa assumption ought not be that challenging as digital migration shifts markets towards Pearson interactive learning products and remedial tools, which will also tend to lessen the current challenges from textbook rentals. With supportive demographics and structurally rising emerging market educational funding and under 1.5% of this currently spent on educational materials, this space continues to have growth potential. The question of when however remains tricky. Many of the funding issues in developed markets for HiEd materials are unresolved and require a political solution if the current massive waste from dropouts and low attainment levels are to be resolved. For emerging markets though, the outlook will be more linked to economic performance, so take a view on commodity pricing and this may serve up a reasonably reliable forecast of timing of recovery. Our own view is that by end 2016 we would have seen some political shift by Saudi and Russia on oil production to enable pricing to stabilise by then.

If the Pearson relative share price performance has been capped by its longer term growth rating and organic revenue growth trend, it’s short-term trading has been sensitive to the immediate performance and outlook in organic revenues. As we’ve highlighted across other stock situations, when you buy an equity you’re buying a growth instrument. As such, it might be more profitable to buy that growth when its priced at a discount to what it’s delivering and sell it when it’s at a premium. Ideally when the growth rate priced into the shares,( the GrowthRating) is below (cheaper) than both the longer term trend as well as the short term revenue delivery and vice-verse. Certainly over the last decade this has been a winning strategy. 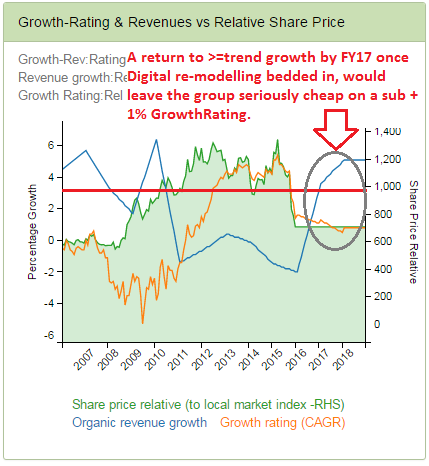 Markets are falling victim to their own recency bias