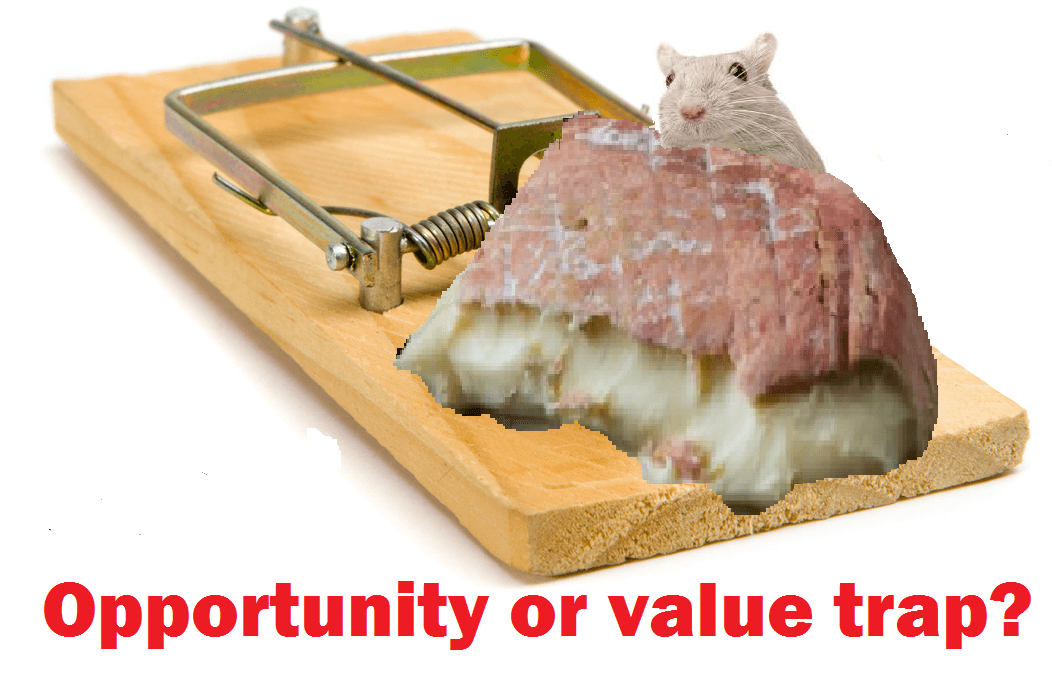 With a relative lull today in the results deluge, I thought it might be interesting to review how some of last week’s stack up, but from a GrowthRating perspective. As we’ve all had to wade thru far to much verbiage, I’ve kept it simple with some annotated charts and only a very few words.  The stocks chosen I think provide good examples of how some cherished brands can suck investors into value traps, which sometimes close gradually (such as with Coca-Cola and Thomson), or more abruptly (as with Nielsen).

Behind the treasury management, share buybacks and corporate restructurings, the reality is a GrowthRating (and relative share price) being dragged down by a lower organic revenue delivery 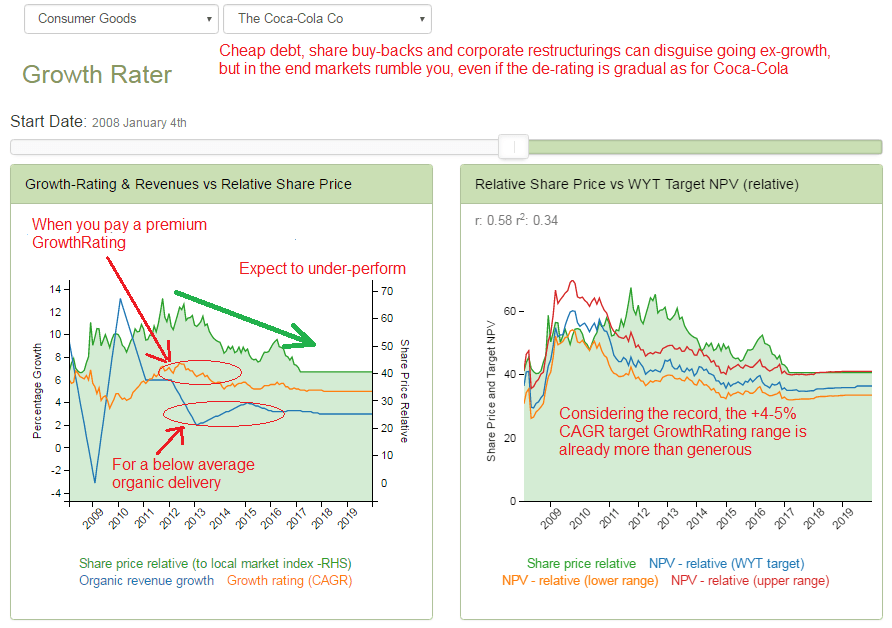 For Nielsen, the reaction to an under-performing top line has been more precipitative. Perhaps markets were spooked that the growth and margin story was being walked back once the PE investors had bailed out! For the patient however, the current GrowthRating of approx +3.5% CAGR is not unreasonable given the substantially syndicated business and as we’ve seen with GfK, the space still has its PE supporters and potential corporate deal makers. 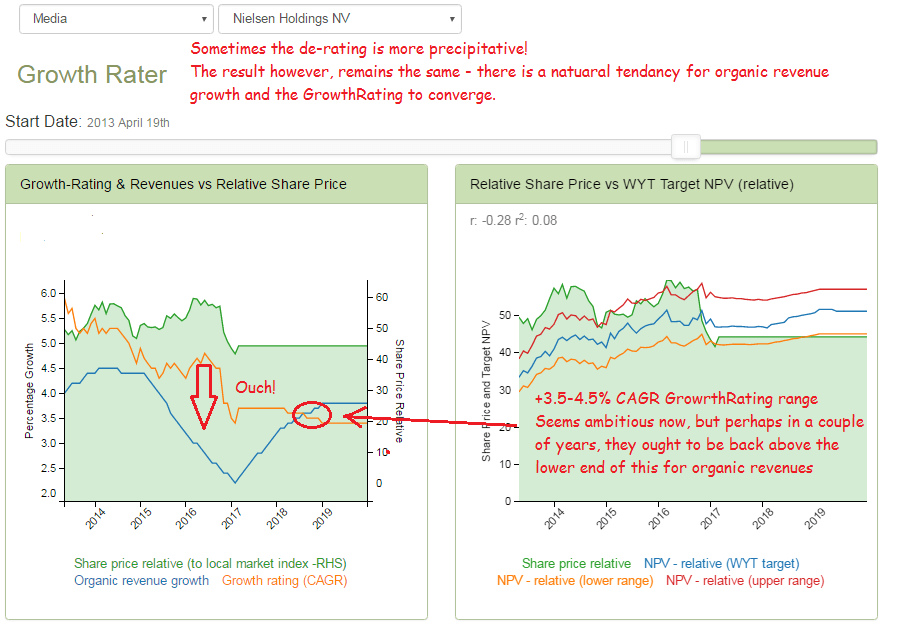 How many years of markets believing analyst forecasts of recovering organic sales momentum by year 3, before they finally capitulate and accept that after series of restructurings and new product initiatives, this might no longer be a >+5% pa growth business?  Cost cutting and the recent fall in GBP (the latter adding >+100bps to margins) have bought some time and stabilised the relative share price performance, but with Legal & Financial publishing still flat-lining, the group will need to pull another rabbit out of its hat to defend the shares. More restructuring, or perhaps the long rumoured MBO? 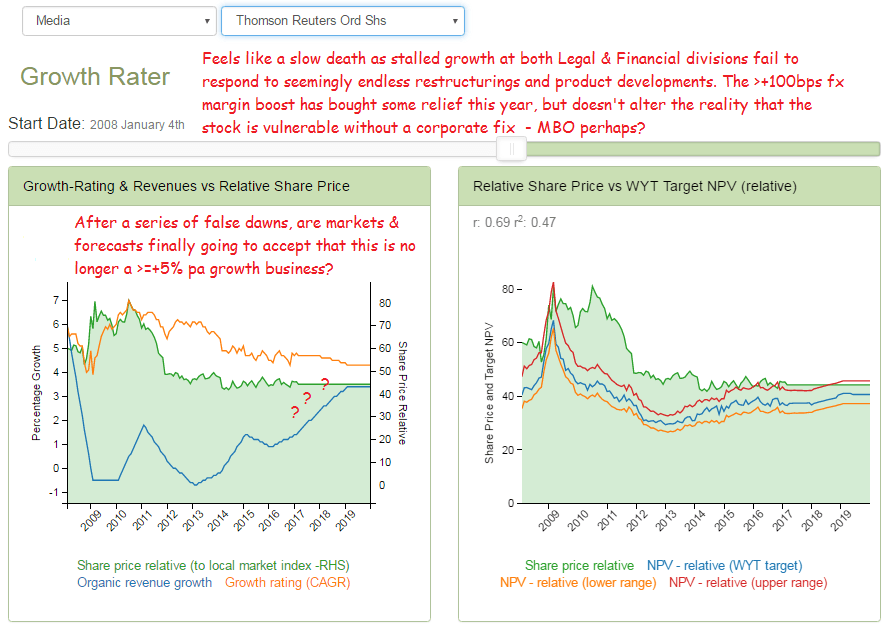 Since 2012, group revenues have run ahead of the growth rate implied from the OpFCF yield and notwithstanding legal settlement costs, this has also accompanied a share price outperformance. Given the high levels of operational gearing inherent in its Ratings and Indices activities and their sensitivity to bond issuance and AUM growth at associated EFTs, the chief concern for the valuation will be whether we are approaching the top in the debt cycle, which may also be hastened by speculation the a Trump tax reform may include reductions, or even elimination, of interest tax relief for corporations. However, as a debt fueled property developer, this would seem to go against the grain, suggesting these fears may be over-done. 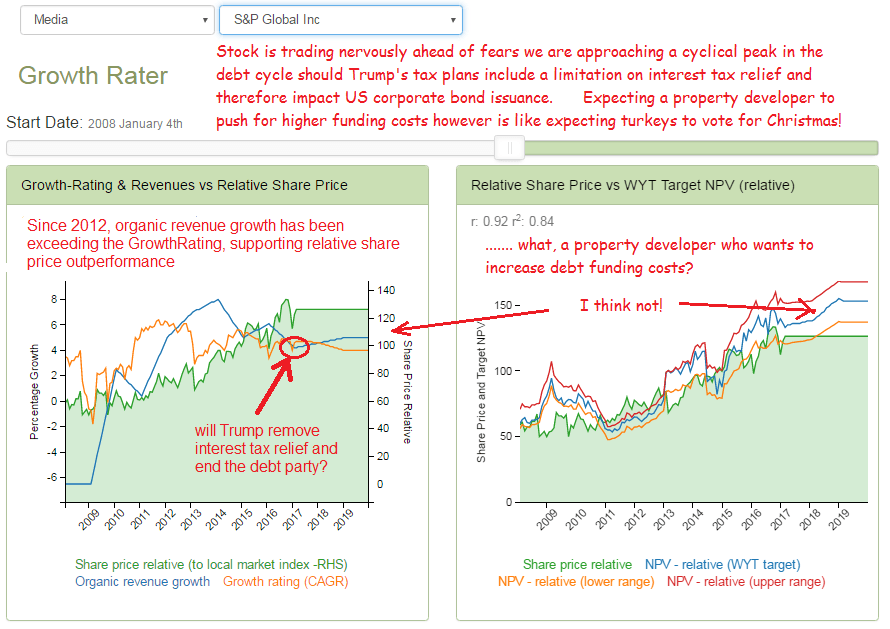 In the agency sector: Publicis – Like a French cheese, you may need to hold your nose, but the experience might be rewarding

The stock carries some baggage (more like Louis Vuitton) following its aggressive digital acquisition spree, subsequent merger attempts, over-ambitious forecasts, insider sales and more over-ambitious forecasts. It is not the first marketing services group to over-reach themselves in trying to buy in growth and new skills and probably won’t be the last.  WPP has done it at least a couple of times and IPG struggled for years, but look at them both now. Fortunately for them, markets are forgiving and blessed with conveniently short memories once top line growth is restored. For Publicis, the question is whether some of the recent business wins and the inclusion of Sapient (last seen raising sales by approx +7%) makes the prospect of a return to positive organic revenue growth in the second half of 2017 a realistic prospect. If so, while it may pain me to say it, the stock may not be unattractively priced on a GrowthRating of under +3% CAGR 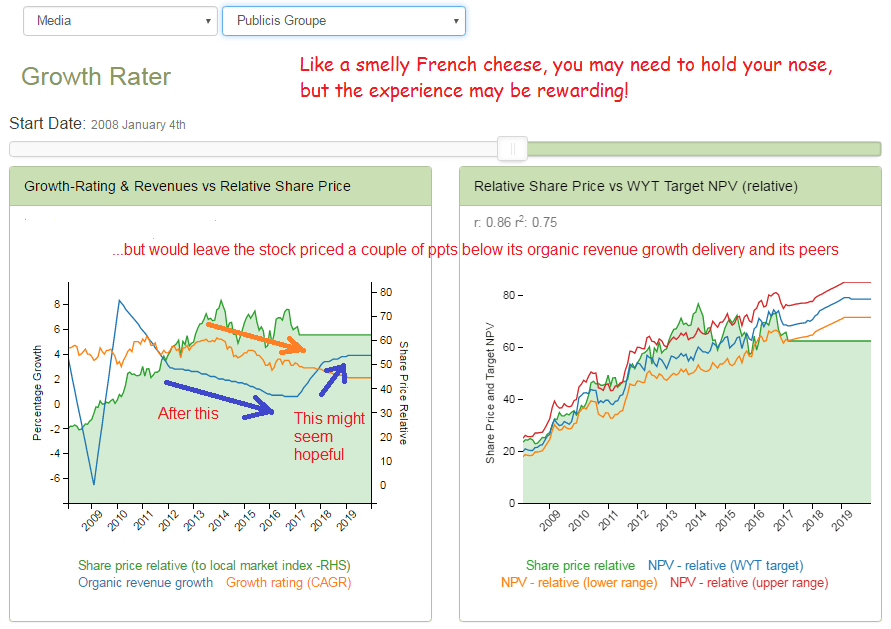 A case of holding one’s nose