Reading the notes to company releases is always wise, even if it can seem numbingly dull as you wade through the IR padding and still can’t find what you want. Sometimes however you stumble across something buried deep in the notes that stops you in your tracks with one of those ‘WTF’ moments.  One such experience was recently with Axel Springer.

As with most print media companies, Axel Springer has had to re-invent itself for the digital age as its legacy newspaper business erodes. For Axel Springer this has meant an aggressive process of culling the peripheral old media and acquiring other people’s faster growth digital assets. In the last five year’s this has included more than a couple of billion Euros spent on shiny new digital assets, which for a business with a sub €5bn market value and enterprise value below €7bn is not exactly chump change. After buying newspapers however, the second most value destructive strategy for media groups is buying and overpaying for the wrong digital one; remember AOL, MySpace, Pacific Century Cyberworks PCCW or Vivendi’s -€25bn of impairments in 2001-2 – these are just the monsters.  Finding the right asset, but at the right price therefore is possibly one of the most important management responsibilities for any acquisition based growth model and given the many disasters, one might expect only the most rigorous of vetting procedures as acquirers conduct their due diligence on the vendor’s business.

It therefore came as shock to read how Axel Springer claimed to value the 93% stake it recently acquired in eMarketer. According to their own Q3 FY16 results release, “The transaction was based on a company valuation prepared by eMarketer”. Perhaps this was just a case of ‘lost in translation’, but Germans often have a better grasp of English grammar than most English, so this seems unlikely. The statement seems pretty clear and self explanatory in that the group used the vendor’s own valuation to price the amount it paid. One might hope the due diligence process amounted to a little more than this, although absolutely no reference is made to this effect.  I was not sure whether I was more surprised at the due diligence process or that such an admission was ever allowed to see the light of day!

If/when the impairment writedowns start to come through with the claim that these are just non-cash items, remember this! 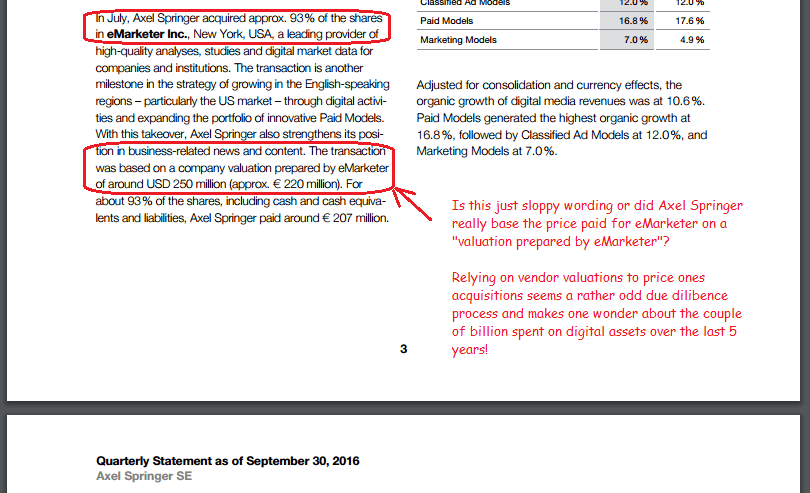 Price based on vendor’s own valuation? – WTF!