Pearson is pricing in a +3.9% CAGR growth rating but has delivered only +1% organic revenue growth in H1 FY15. Deferred revenues however were up +3% organic at end H1, which if translated into similar improvements in H2 organic revenue growth would put the group on course to perhaps delivering +4-5% for FY16 and therefore comfortably exceed the growth currently being discounted by the shares. A strategically sound corporate disposal at an attractive price, while expected, is nevertheless a crowd pleaser to buy some time for management to deliver on its investment plans.

(For more register at www.growthrater.com) 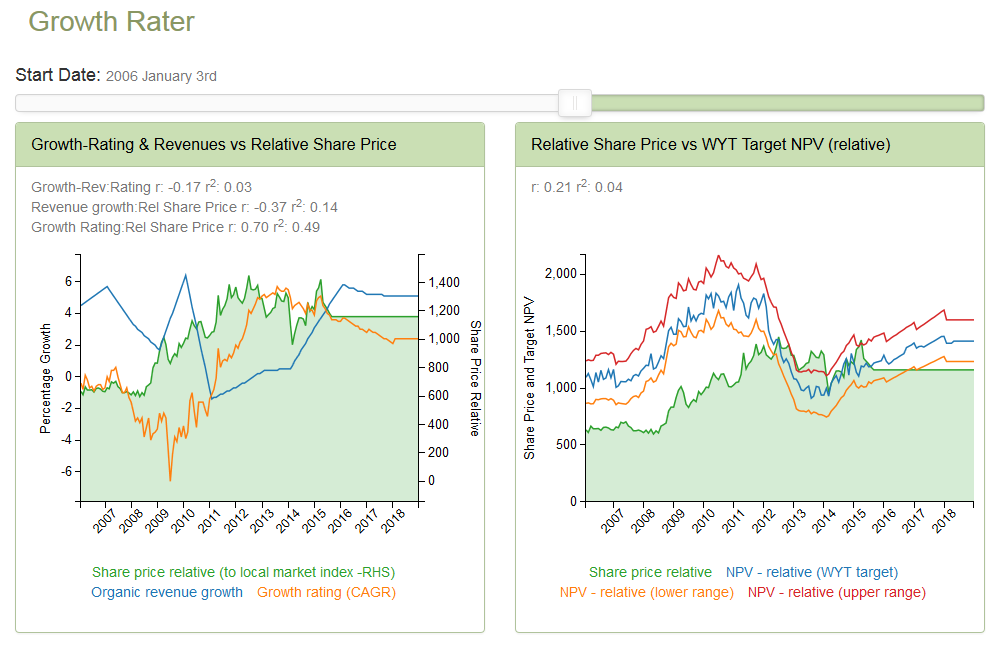 “Over my dead body” was the alleged retort that the previous Pearson CEO, Marjorie Scardino made when asked whether she intended to sell the FT Group. Of course, Marjorie had been CEO of the Economist before taking the top job at Pearson, so may have held a personal attachment to financial publishing. Not so her successor, John Fallon who, while chief spin-meister for Marjorie, was getting it in the neck from both the buy and sell side for not dumping the businesses at the top of the market at the time when Murdoch was paying nose-bleed prices (not a Trump/Kelly analogy!) for the WSJ.

Strategically, the sale of the FT Group and now its 50% stake in the Economist was always a no-brainer given the Pearson focus on educational publishing. The reason for its current timing may seem to reflect the differing priorities and background of a new CEO, but the reality is far more mundane; John needed to sugar the pill of stalling growth and falling earnings as he reinvested into online remedial learning tools at a time when the rug was being pulled from under the College market.Â  Under Marjorie’s watch, school enrollments were booming and with it, investment in educational materials and testing. With two of Pearson’s big rivals weighed down with debt following some particularly aggressive buy-ins by private equity, the group was able to outspend on new online products without impacting margins while also taking market share.

By the time John Fallon arrived however, the wheels were beginning to fall off the old educational publishing model. Improvements in State funding were not permeating down to K12 textbook publishing, where digital penetration was slow, while the growth in College publishing that had been sustaining the HiEd publishing markets was rapidly heading in reverse. This was not the normal cyclical fall in enrollments as improving employment opportunities intercept potential students however. This was a crisis in funding as outstanding US student loans doubled to nearly $1.3tn in just five years, yet was not matched by educational attainment or improved employability. Students were sold the American dream by the profit hungry universities, but often with little useful qualification to help pay for a student loan debt that Debt.org estimate that in 2014 averaged $33,000 for 70% of college graduates. The issue was not the educational materials suppliers such as Pearson, as expenditures on these account for under 1.5% of overall educational expenditures; indeed much of Pearson’s online services centre around remedial learning tools with a quantifiable return and record of fixing the massive problem of falling attainment and college drop-outs. It has been a tide though, that has raised and now lowered all boats, notwithstanding whether they are part of the problem or potential solution, such as Pearson.Â  The time between investment and return in a market where the teachers often feel threatened and can be resistant to change makes this a tricky time for the new Pearson CEO. Last year, investors had to swallow a bitter pill of increased development charges accentuating an already soft top line performance. For FY15, lower charges and savings on these were to add almost Â£90m (before tax) to the bottom line, or around +13% to earnings. By the third year however, FY17, growth would be dependent on these new services delivering incremental revenue and margin growth. The trajectory in organic revenues through this year and into next therefore will be seen a crucial test on this strategy and with H1 organic revenues still languishing at only +1%, investors would need appeasing, so hence the need for a crowd pleaser divestment.

With the low hanging corporate fruit now picked, there will be few places for managment to hide from now. The encouraging data released with the H1 results was a a +3% rise in organic deferred revenues which, as can be seen from the initial chart analysis (also go to www.growthrater.com), would put the rate of organic revenue growth to within spitting distance of the current +3.9% CAGR growth rating currently being priced into the shares. More importantly though it would encourage markets into anticipating a rate nearer +4-4.5% perhaps for FY16 which, if achieved would leave the growth rating trailing.Â  Markets are impatient, so CEO’s occasionally need to throw in a bone to buy some time to get to the point where rising revenues can vindicate the strategy.