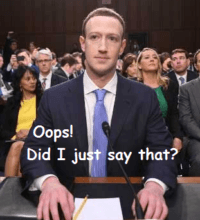 Wow, now that’s quite an admission!

Zuckerberg, by implication no longer sees Facebook as an open social platform to enable users to connect and share their own content, but one where Facebook participates in the ownership of that content and can impose its own editorial control as to what is shared. This would be equivalent to your telephone operator or ISP provided censoring your telephone conversations or email content for what was deemed acceptable to those companies. With regards to the current generation of internet monoliths such as Facebook, with their restrictive voting structures, what that means is that social intercourse on these platforms is subject to the personal viewpoint of perhaps one, possibly capricious and politically biased individual. With natural scale advantages favouring effective online monopolists, this usurpation of editorial oversight over a person’s freedom of expression, without proper public oversight or accountability is clearly not healthy in an open society. In this instance, given the well known political slant of Zuckerberg and his minions, this also has major ramifications to the democratic process, if views not deemed ‘acceptable’ are silenced. Such actions would be deemed unwelcome if conducted by the state, where there is at least an element of public accountability and judicial oversight, but for an unaccountable private individual to claim such ‘responsibility’ will increasingly be seen as intolerable.

Another implication of accepting responsibility for content, rather than acting as a distributor/facilitator is that now as a publisher, Facebook will also be accepting legal responsibility for the content published. For copyright management collection societies and legal hangers-on, this could prove to be a field day. Instead of millions of separate rights infringements that aren’t worth chasing down individually, now they can go after Facebook for lost royalties. Now how much could that cost them?

Zuckerberg may have gone to give congressional testimony, thinking it was about the (mis)use of ‘private’ data for marketing purposes by those devious republicans, but his admission of responsibility for content posted on Facebook promises to open up a much bigger can of worms. Perhaps we have got to the the point where these internet platforms have become too dominant, while confusing/abusing the distinction between acting as a connection between users and an exploiter of the content transmitted on them. Given the scale of the rewards on offer, it is naive to expect these increasingly dominant internet leviathans to manage the inherent conflicts of interest as they blur the distinction between platform controller and content owner. This is not their responsibility and clearly, as can be seen from the evidence of data abuse across the industry and again from Zuckerberg’s own testimony, is also beyond their competency.  For investors, the next big theme is going to be the emergence of regulatory oversight and the potential dismemberment of some of these groups as happened in the past in other media and telco segments.