Another example of how legacy print media valuations have tanked

David Levin’s long term re-structuring of UBM to exit its declining legacy print businesses continues. Yesterday UBM announced that it is selling its UK entertainmentÂ and technology portfolio (including Music Week and Pro Sound News) to Intent Media. In itself, there is little of surprise as UBM exits this small segment which represented less than 4% of its print magazine revenues last year and will gain some additional scale benefits in the sector from Intent (albeit only modestly).Â  Of interest however is the miserable price achieved of only Â£2.4m. This represents an exit multiple of under 50% of the portfolio’s sales last year (of Â£5.4m) and 4x EBITA (of c. Â£0.6m). What is not revealed however, is the prospective liabilities being assumed by Intent (including redundancies and possibly pensions etc) to offset what would appear to be a deal generating an initial EBITA return of around 25%.

Impact on UBM’s valuation? Another example of the need to look through to see where the profits come from rather than the overall figure.Â While theÂ multiple of sales of under 50% is similar to the level at which I already value UBM’s print magazine interests (from a normalised FCF yield basis) it may provide a wake-up callÂ to those who have valued the business on an overall PE basis, whichÂ anyway is already flattered by theÂ treatment of the tax assets and lowÂ taxÂ charge recognised through the P&L. 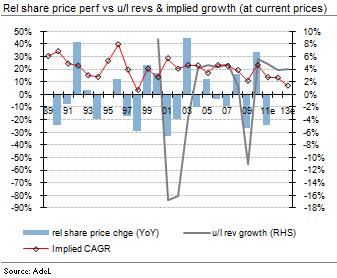 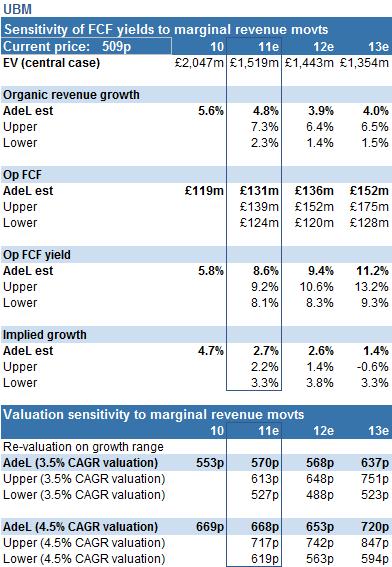