Thomson Reuters – another divestment, but what to do with the cash?

Unless one wants to lend to one of theÂ PIIGS, cash returns are currently too low to tempt corporates to sit on excess cash. But what to do with it? For Thomson Reuters this issue will become increasingly pertinent following its announcement to divest its healthcare operations (c. $500m of sales and $100m of EBITA) which I estimate could generate a further $1.2bn on net proceeds in addition to the c. $1bn already raised from the disposal of peripheral assets across Legal and Markets divisions (of BAR BRI, Scandinavian Legal & Tax businesses, Risk and Portia businesses). By the end of 2011, net debt therefore could fall to below $4bn (from $6.4bn), which with $6.6bn of term debt could see gross cashÂ  of over $2.5bn sitting on the balance sheet and diluting EPS. With $2.5bn of un-utilised bank facilities this could provide the group with a potential funding headroom (under existing funding arrangements of over $5bn. 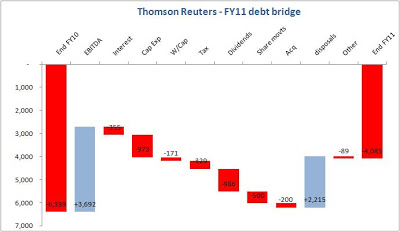 For a subscription based professional publisher, a 2-3x net debt to EBITA ratio is a comfortable level of financial leverage and indeed, broadly reflects the average levels sustained by the sector over the past 20 years.Â While the issue of under-leverage will not be unique for Thomson Reuters after this year, a debt to EBITA ratio of below 1.0x and the sizable gross cash position will exert pressure on management to allocate this into more productive areas. In the past, management has not shied away from taking bold steps to refocus the portfolio (Reuters being a case in point) and has also instigated share buy-back programmes to soak up excess capital.Â  Since the $17bn acquisition of Reuters in 2008 however, the group has been relatively inactive in applying its circa $1.5bn pa of FCF (I estimate $1.8bn for 2011 and $2.4bn for 2012), with only $349m of acquisition spend and $905m of dividends in 2009, rising to $612m and $898m respectively for 2010. For 2011 the group has continued to focus its acquisition strategy on smaller infill purchases such as Manatron (property tax software for Governments), Mastersaf Brazil (Brazil legal publisher) and World-Check (personal & corporate risk information) and has not yet signalled an appetite for something more substantial. The disposal strategy meanwhile seems to aim atÂ discarding peripheral activities, even if currently performing strongly. Healthcare, which has been exploiting the rising demand for 3rd party payer services in the US appears another example, delivering robust growth, but with a US market model that may have more limited applications elsewhere. 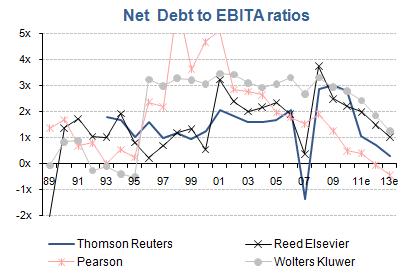 Excess liquidity with prospective cash of >$2bn and a further $2.5bn of undrawn facilities 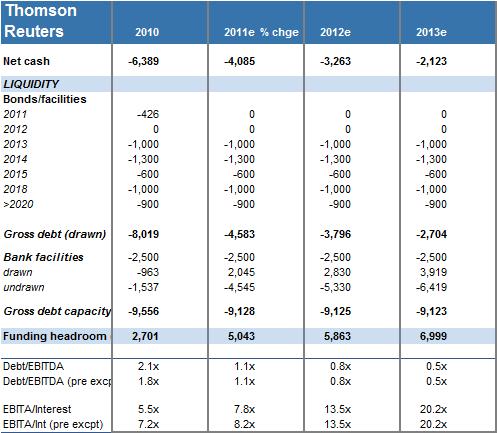 A $2bn buy-back would be a low-risk option
Thomson Reuters may not be the highest yielding media opportunity around, but a share buyback to utilise say $2bn of prospective excess cash would provide a low risk option to offset the EPS dilutive impact of this year’s divestments, while representing a 7% reduction in in the equity base. At current levels I estimate that the group trades on an operating FCF yield of 6% for FY11, rising to almostÂ 7% for next year.Â Grossing up for assumed tax at 30%, this represents an EBITA yield of over 8.5% for FY11 and 9.7% for FY12.
Would Thomson use its $5bn of funding headroom to launch a more sizable bid for either an existing competitor (eg Reed Elsevier or Wolters Kluwer) or to leverage a platform into an adjacent area such as risk information?Â  This certainly remains a possibility and rival valuations are not particularly demanding. Choice assets such as Wolters Kluwer’s CCH tax and accounting business or its compliance or European legal content however could also triggerÂ regulatory investigation which might restrict Thomson’s scope for manoeuvre. For the present, I would expect Thomson to continue its policy of infill acquisition of niche content and software, particularly across legal and tax and in emerging markets which can be folded into its existing distribution and technology platform. As such, the recent divestments ought not to be interpreted as prelude to a major acquisition with its accompanying risk of value dilution. While selling businesses on EBITA yields of perhaps 7% (and FCF yields of around 5%) for a cash interest return of possibly less than 2% will have an initially dilutive impact to EPS forecasts, this could be more than offset by a share buyback. 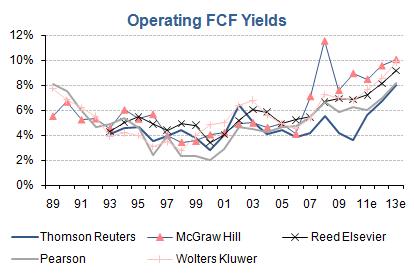 Thomson Reuters valuation range +5.5-6.5% CAGR = U$37-45 ps
Underlying Legal and Financial markets are still struggling to find direction while theÂ initial dilution from the divestmentsÂ areÂ also cappingÂ the momentum inÂ EPS forecasts for Thomson. As a consequence, Thomson’s growth rating has stalled within a narrow growth rating range of approx +5% to +5.5%. While subscription lag is seeing current organic revenues are lagging this rate of growth,Â a rising trend of net new sales based onÂ a well invested pipeline of new services, market leadership and supported byÂ pricing powerÂ could seeÂ organic revenues exceed this growth rating by next year. As revenue momentum recovers there should be scope to see the growth rating return to a +5.5% to +6.5% growth rating range again which would equate to an NPV of around U$37-45 ps. 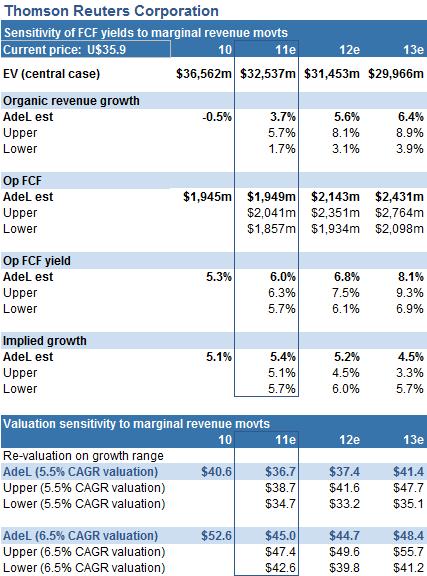