BSkyB – look beyond the lynch mob

So the lynch mob is out and led by such political worthies as Keith Vaz. How can David Cameron do anything else but embrace the ‘popular’ frenzy that has been whipped up byÂ Murdoch’s media rivals and fickle Westminster toadies.Â  The BSkyB bid is of course now dead, or so we are reliably informed byÂ Roland Rat’s creatorÂ and as MPsÂ exerciseÂ some political posturingÂ by voting against theÂ deal (albeitÂ legally meaningless), prior to jetting off on vacation toÂ exotic locations onÂ taxpayer funded junkets or courtesy of some dodgy billionaire sponsor.
Naturally Murdoch will be suitably humbled and slink off to the US, never to grace these shores again. Dream on! 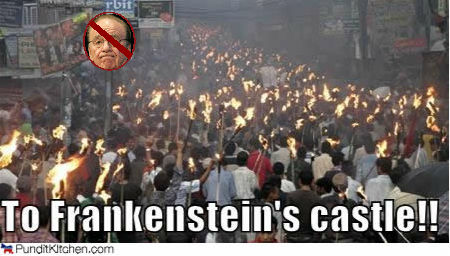 As Murdoch’s shares free-fall, what are the options for BSkyB’s shareÂ and how should investors position themselves.
Option 1: Murdoch/News Corp is not deemed fit and proper to own a UK broadcaster. While an unlikely verdict by OFCOM, it could precipitate either Murdoch withdrawing from News Corp’s management or a sale of their current 39% holding in BSkyB (as this already represents a controlling interest).Â  Both outcomes could be positive by eitherÂ reviving the bid or forcing News Corp to divest. To seek the best possible price for shareholders, News Corp would undoubtedly use its controlling stake to put BSkyB into play to secure a control premium for its shares.
Option 2: Status Quo – Murdoch/News Corp remain fit to own BSkyB, but are scared off from pursuing the bid or are blocked by a spurious ‘public interest’ test (which could be appealed) and sit still with their existing stake until the storm passes. Without the immediate bid premium, the shares settle down to a fundamental valuation, although as highlighted by my FCF/Growth rating analysis,Â as margins ratchet up, this may not be materially below were they are at the moment.

Option 3: Murdoch fights back – Today’s fight-back from the Sun and Times suggest that there may be life in the old dogÂ and that he’s not going to give up his bone just yet. The general assumption that top management is implicated in illegal activities has yet to be proved. While the concession to having the bid referred to the competition authority (by withdrawing the earlier concession to divest Sky News) will kick the deal into touch for a good six months, it would provide Murdoch more time to resolve some News Intl management issues as well as get his PR response to these accusations better sorted.
For premium research content including bespoke analysis and valuations please contact me at adelarrinaga@gmail.com for further information