BSkyB valuation trade off between growth and margins

Rebekah Brooks may have describedÂ the News of the World as being toxic, although one might well ask under whose watch this originated.Â Murdoch’s desperate attempts to distance himself and News Corps bid for BSkyB from the phone tapping (and worse) scandal by discarding the offending title, but retaining her however risks all of this. Not only has it failed to end the media feeding frenzy, but it has also scared the government into delaying a decision on the bid and even resulted in dark mutterings from OFCOM about reviewing News Corps fitness to own Sky at all.

With a delay and possible challenge to the bid, the BSkyB shares dropped to only 750p on Friday, a level halfway between the original 700p per share offer and the >800p that the independent directors indicated would be the minimum necessary to secure their support. Having sacrificed the UK’s largest paid circulation titleÂ (and > 200 staff) to stay in with a chance at Sky, will Murdoch’s sense of personal loyalty to Rebekah be allowed to stand in the way ofÂ this, particularly if she’s off David Cameron’s Christmas card list? BSkyB’s short term share price performance may therefore be inversely proportional toÂ the length of her continued tenure, which may not be long.

Beyond the hysteria,Â markets willÂ need to keep an eye on what Sky may be worth. Still inÂ investment mode, the group has traded margins for growth, which naturally makes the stock look expensive on near term metrics. However, the group isÂ past anÂ investment inflection point and leveraging itsÂ dominant market position, control of content and rising subscriber and revenue base this is changing rapidly.Â Current EBITA margins are sub 20%, but these are capable of rising to the mid-twenties while still supporting near market average growthÂ rates. Looking at the valuation in terms of a low-twenties normalised margin and even sub market growth rates of +3.5-4.5% CAGR could comfortably support a valuation of between 800-900p per share on my growth model. Â Squeeze the margins up a little to mid-twenties and the growth rating to a still sub-market growth rate of +5% and one can quickly see how some major shareholders have been arguing for a price of around Â£11 per share.

BSkyB – valuation trade off between growth and margins

Although a >+5% CAGR growth rating may be an ambitious expectation on current consensus revenue growth forecasts beyond 2013, the group has sustained a growth rating in excess of this in all but two years, 2005 and 2006, when I estimate it fell to +3.6% and +2.8% respectively. 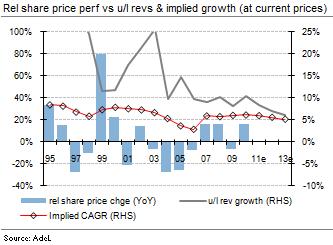 For premium research content including bespoke analysis and valuations please contact me at adelarrinaga@gmail.com for further information