Guidance slashed and CEO dumped. Shares bounce however on appointment of break-up artist and more layoffs.

Up until today (6 Oct 2015) the narrative of a weakening underlying performance from macro and fx headwinds (particularly around Brazil and Agriculture) was trumping the speculative aspirations of activist shareholders such as Peltz and an EPS guidance that was increasingly reliant on share buybacks and lower tax provisioning. With the sudden â€˜retirementâ€™ (firing) of CEO Ellen Kullman accompanying a further trimming of current year earnings expectations however the narrative is shifting. Now bad is good; a bit like the macro relationship markets have with the Fed. It is not so much due to the announcement of the acceleration and extension of the existing cost reduction programme, but the appointment of Edward Breen, an existing Du Pont board member, as interim Chairman and CEO, ahead of the proposed search and appointment of a full-time replacement. Mr Breen of course was the CEO of TYCO who oversaw its three way split back in 2012 and for those who managed to get out of the shares before 2014 will have very happy memories of the subsequent share price outperformance under his watch. TYCOâ€™s more recent performance however also serves as a reminder that repackaging the pieces is not a real substitute for real organic growth any more than a series of debilitating layoffs (ask HP shareholders!).

Markets like the idea of Edward Breen’s appoinment who was CEO at TYCO and over-saw its three way breakup at end 2012. The shares performed strongly, although only for a subsequent 18 months and the shares relative to the S&P are pretty much back where they started. Breakups are often better in the telling than the realisations! 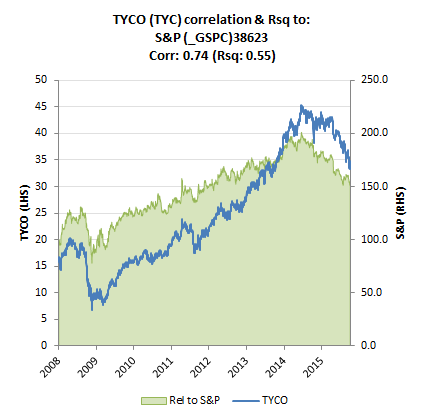 Run with the breakup story but know when to cut and run!