Has Mail Online discovered irony or was it just a cock-up? 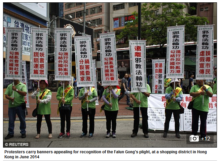 Perhaps the successful Mail Online should stick to celebrity gossip as its foray into serious issues seems prone to schlock.

While lacking the pithy wit of a News of the World headline, the Mail Onlineâ€™s recent article on Chinaâ€™s alleged mistreatment of Falun Gong certainly pulled few punches with its title:

â€œThousands of religious prisoners in China had their livers, kidneys and corneas ripped out while they were ALIVE to sell to ‘transplant tourists’, claims new filmâ€

On first reading, the article seemed be a one-side puff piece promoting and anti-Chinese film with its â€œmost compelling testimonyâ€ coming from a doctor, who just happens to be a Uyghur. Was there no balance to be had? Are the Chinese authorities that evil and when is the computer game out?

â€¦.the article does have balance, although you have to be able to read Chinese to get it.

In one of its pictures (below) the articles shows the groundswell of support for Falun Gung in Hong Kong from some clearly hardened radicals â€“ well mainly little old ladies. Read what is actually written on the banners however and youâ€™ll see that they are saying quite the opposite to what the Mail Onlineâ€™s caption purports. Far from them â€œappealing for recognition for the Falun Gongâ€™s plightâ€ as claimed by the article, the banners are actually urging people to distance themselves from the evil religion of Fallun Gong (the black script) with the scripts in red making various complaints against the sect including accusing it of attacking China and attempting to de-stabilise Hong Kong by aligning it with foreign powers.

Somehow, I donâ€™t see the Mail Online as being big on irony so either this was a simple cock-up by the picture editor who canâ€™t read Chinese and the editor who didnâ€™t think to check ( – come on Chinese is not exactly a minority language) or was selected by someone who knew exactly what is being said on the banners in the picture and maybe disagreed with the political narrative of the article.

Either way itâ€™s all rather reminiscent of when the media was showing us fake pictures of Russian tanks supposedly invading Ukraine when in fact they were stock photos taken in Chechnya a few years before.

Well done guys, best stick to articles about the size of Kardashianâ€™s booty.

Making the evidence fit the narrative