Recency bias is alive and well. “At long last, normal profits are becoming normal for airlines”, so says the IATA in its June 2018 industry update titled “Solid Profits Despite Rising Costs”.  After a couple of years of improving margins and ROIC, is this a paradigm shift for investors to jump aboard? Unfortunately, it feels like that scene in Jaws when the mayor is trying to usher bathers into the water just because no one had been eaten for a couple of days; and guess what happened next!

The key issue for investors in this space however, is what drives airline pricing power. Historically, the industry’s ability to pass on rising fuel costs to consumers via fare increases has managed to insulate profitability to these moves, as the trailing correlation of passenger yields and oil prices of 0.83:1 seems to confirm. As a consequence, the recent rebound in oil prices and prospective fuel costs have had only limited impact on sentiment and margin forecasts as can be seen in the excellent IATA report and accompanying data sets, which ought to be required reading for anyone trying to analysis the sector. The big difference this time though is the base of operating margins and ROIC going into this rising fuel price cycle is around double the last time, which for a capital intensive industry where all the principal players are now pursuing a scale model is crucial. 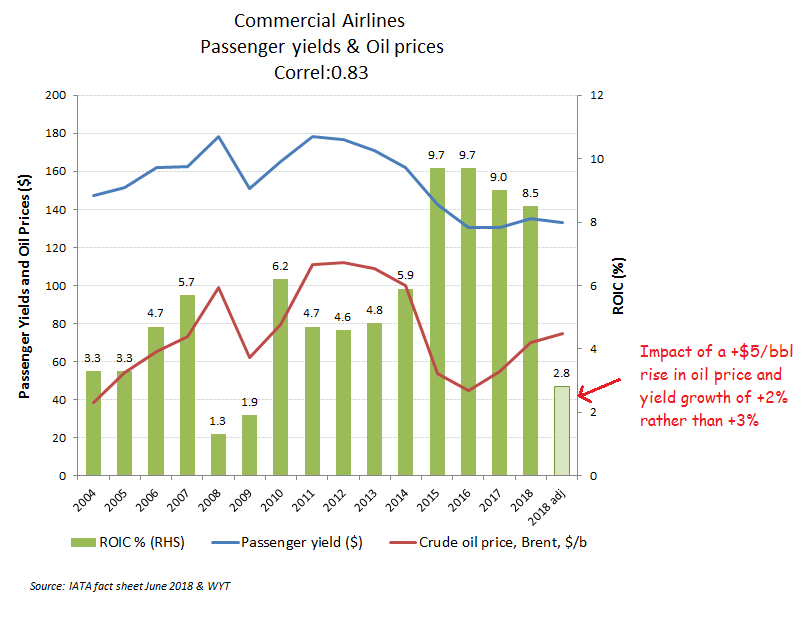 It is easy to fall into the trap believing that virtue is rewarded and that investing in a better mousetrap will gain you pricing power to leverage super-normal returns on that investment. The Telco sector has been promoting this idea for decades; that it just needs another investment cycle to offer new services which will recoup all that investment in accelerating revenues and margins. Unfortunately, in a well regulated and therefore competitive market that permits new entrants and where everyone can adopt the same model and technology, returns are inevitably capped to the most efficient marginal operator. As these industries invariably favour scale, it also means a headlong rush for market share which can encourage lax assumptions on the price of capital and asset consumption costs to make the numbers add up. The IATA ROIC and margin data may look impressive, but you can rest assured that FCF is lagging a long way behind; if possibly never. Depreciate your planes over 23 years and assume a 15% residual value like RYA and you too can have great margins and grow your fleet by +7% pa. When you’re the only game in town pursuing a scale game this might work, but now everyone seems to be in on the act and it is this that concerns me. Capacity commitments become a voracious beast that need feeding with marginal revenues and where yields can be sacrificed for increased loading, as RYA has amply demonstrated on both counts.  Now with the ‘new normal’ sector profitability assumption, everyone wants to adopt the growth model and to use price to chase marginal share. What is perhaps not fully appreciated however, is the sensitivity of returns should passenger yields undershoot even modestly while fuel costs rise ahead of budgets.

In the below table I had reproduced IATA’s latest industry projections for 2018 and historic numbers since 2004. I have also included an additional column where I very modestly adjust three assumptions.

Modest as these changes are, the impact cascades down through the P&L by trimming -1.4ppts/-$12bn from revenues, but -45%/-$25bn from operating profit and leveraging up the YoY project margin erosion from -70bps to a massive -370bps. The collapse in ROIC meanwhile is even more dramatic, increasing the IATA’s projected -50bps decline from 9.0% to 8.5% by a further -570bps to only 2.8%.  How many of these wannabe players manage to survive may depend on their ability to sustain financing and convince markets of their true underlying profitability and cash flow potential, but the short term could seem bloody as they try not to blink first. 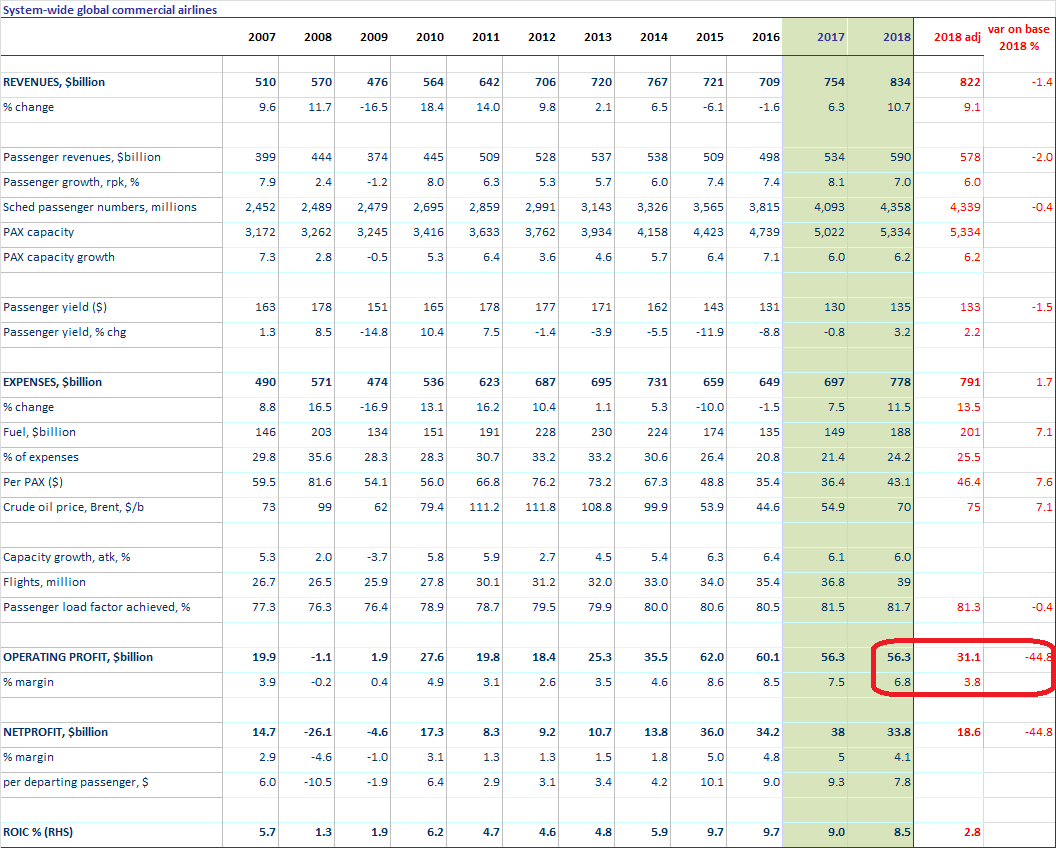