Equity markets were widely reported to have bounced on Friday after the solid May private sector job growth, albeit the accompanying rise in average hourly wage growth presages another rate rise by the Fed. With EU’s grip on its southern flank unravelling as friendly regimes in Spain and Italy are replaced however, the prospects of a GDP induced rise in US rates ratcheting up European ones at a time when EU growth is being challenged by higher oil prices, political instability and punitive tariffs, is going to present a big headache for Draghi and the ECB.

Will he get out his big bazooka again and risk becoming the sole buyer of EU debt in order to sustain the illusion of growth, or has that ship now sailed? If so, then where could 10 year sovereign debt yields get to in Italy, Spain and who knows France as well. Without the artificial support from the ECB and implicit back-stop from German tax-payers (so much for it not being a transfer union), there is little reason to suppose that debt yields for these structurally blighted deficit regimes would not sit at a considerable premium to those in the US. One doesn’t have to reach far back to remember the 7% plus yields on 10 year Spanish bonds on the last Greek debt renogotiations to see where and how quickly rates could move.  What then would be the demand for German cars hitherto funded by cheap liquidity from the ECB. With the US threatening to slap comparable tariffs to the EU on car imports, such a squeeze on its domestic markets at a time when British car markets could also be challenged by Brexit is piling more pressure on Germany and its auto industry.  Perhaps they could reverse their previous tariffs increases on cheap Chinese aluminium and steel to help their auto manufacturers a bit on input costs! 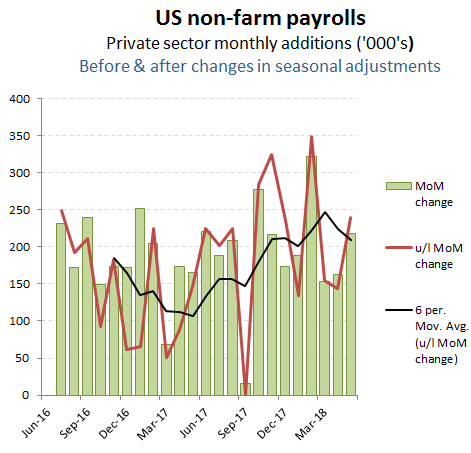 Reported private sector job additions in May was +218k, while the underlying figure, excluding the usual shifts in seasonal adjustment came in at +239k, taking the rolling 3 month average to +179k per month, or an anualised rise of approx +1.7%.  Average hourly wages meanwhile remains lumpy on a MoM basis, with May’s +0.3% annualising out at an inflation busting +3.6% after April’s modest +1.8%. On an actual YoY basis however, the rise was +2.7%, just +10bps ahead of the +2.6% increase posted for April. Including a slight increase in average hours worked of +0.3%, that translates into an average YoY wage increase in May of just over +3.0% which if aggregated with the increased employment number implies total private sector wages are up by +5.0% YoY in May; tracking slightly ahead of the +4.7% nominal increase in US GDP (to Jan 2018). 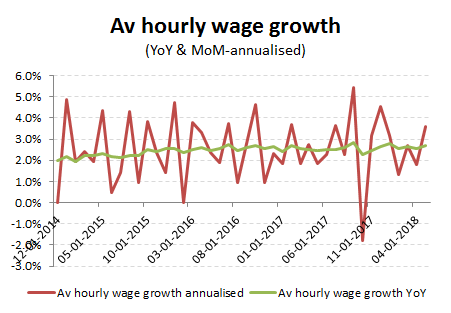 Av hourly wages recovered from a weak April, edging the YoY advance from +2.6% to +2.7%

May job growth by sector

The big surprise, was the lack of one, job growth relatively stable across the main industrial sectors, with temporary help services edging lower and remaining unchanged YoY. The strong growth in mining activities was consistent to the stimulus of higher oil prices is having on fracking activity and employment in related areas, although the strength in Construction is at odds with the last data point on that industry, April housing starts, which tumbled by -3.7% YoY. Perhaps phasing issues such as the earlier timing of Easter rather than the more structural impact of rising rates was responsible, which might suggest a better housing start figure for May could emerge, when this is released in mid-June. If not, then we would be checking next months job data to see if there is a lagged impact on jobs which could result in a modest pull-back in job growth in June. 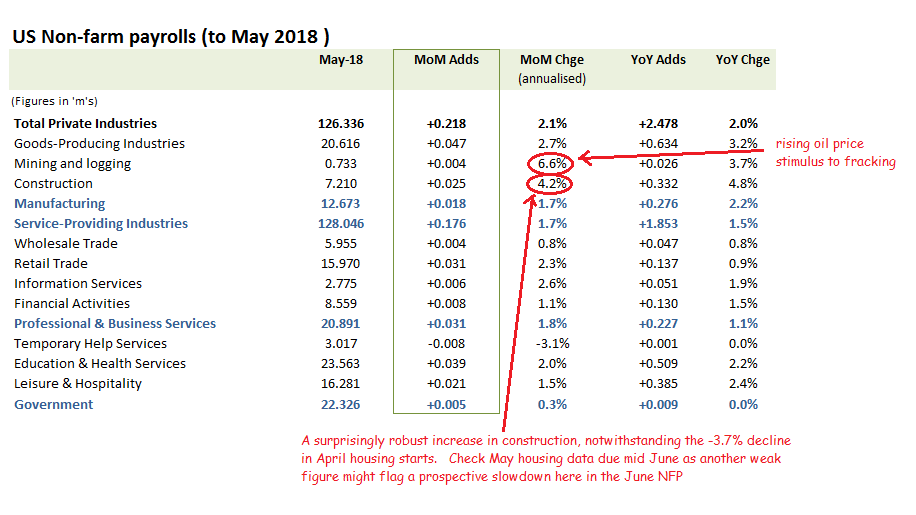