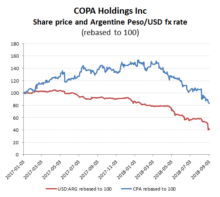 Chasing rainbows for capital intensive businesses can be tricky, particularly if you’ve sunk a lot of capital only to find no crock of gold. This must be how Copa Holding must feel now, having thrown capital into building capacity in Argentina ahead of some particularly aggressive traffic growth forecasts. While traffic volumes has so far remained surprisingly solid, (USD) yields have proved less resilient in the face of the collapsing Peso and rising domestic inflation. Unfortunately for Copa, it was not alone in chasing this rainbow, which means too much capacity desperately trying to defend loadings. As Argentina sinks back into financial crisis and its Peso tanks, the yield squeeze reported by Copa in its Q2 results clearly isn’t going to be a one-off event. While analyst forecast once again appear behind the curve on this, the stock price has been more attuned to these issues. 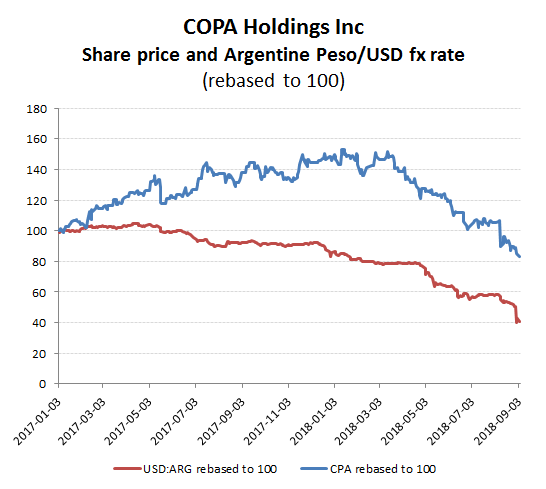 Even back in June and ahead of these Q2 results, the trading headwinds for Copa were piling up from Venezuela to Mexico and I was warning against trying to catch this falling knife too early, albeit my analogy of the machete ought to have been replaced by a gaucho’s facon.

At some point, markets will bottom out, Argentina will default again and we’ll be back to square one as pundits get sucked back into the LatAm growth narrative and highlight Copa as a way to leverage this. What is less clear however, is how far down one still needs to take the trading forecasts and therefore the credibility of any metric based valuation analysis at this stage. My own forecast for Copa are still well below the consensus (see the web app ‘Accounts’ data), although these may not be too far adrift from where markets are already aiming off. Like a heavy weight on the end of a piece of elastic however, there is little to stop the shares over-shooting my base case valuation, particularly while the Peso remains in free fall. Events may prove me wrong, but I will remain just an observer on this one until some stability can be restored to the Argentine peso.