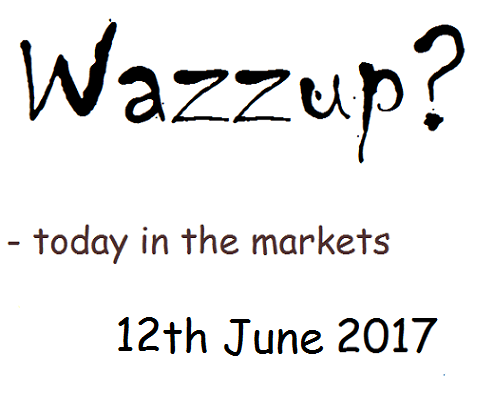 Theresa may have to eat crow when she dines with newly elected Macron tomorrow, but the more immediate driver to markets this week will be whether the Fed raises rates on Wednesday despite weak inflation, GDP and net job growth. For the UK, weak sterling and consumer expenditure growth figures from VISA suggest continued pressure on domestic stocks and particularly retailers.          .

To add to Sterling’s post election woes, VISA has released its UK consumer spending index for May and perhaps unsurprisingly they aren’t great and headlined as “Consumer spending falls for first time in nearly four years”

With Easter falling into April this year (vs March in 2016) and ahead of the UK general election, one might have expected consumers to keep a tight rein on wallets, so the data probably needs to be treated with an additional amount of caution.  For those worried about their portfolios, retailers have come off worse, particularly clothing, footwear  and household goods (AB Foods and M&S amonst the GrowthRater coverage) while online continues to grow and take share (+6.9% YoY).  The slippage in food retailers (-0.6%) meanwhile was relatively modest (Tesco, Morrisons), with the fair weather perhaps supporting a still balmy expenditure on leisure, Hotels and Bars (Paddy Power Betfair, Whitbread, JD Wetherspoon)

“Half of the eight broad spending categories noted lower spending volumes compared to one year ago.

Transport & Communication (-7.9%) and Clothing & Footwear (-5.2%) noted the strongest rates of reduction. Notably, it was the quickest fall in expenditure across Clothing & Footwear categories since April 2012. Household Goods (-4.1%) meanwhile saw the quickest drop in spend since March 2013.
Food & Drink retailers saw a marginal decline in expenditure during May (-0.6%).
In contrast, Misc. Goods & Services (which includes hairdressers and jewellery) saw the strongest increase in spend (+7.1%).

Split by channel, household spending declined solidly through Face-to-Face channels (-5.3%), to mark the quickest drop since April 2012. On the other hand, e-commerce posted a +6.9% rise in spend after a marginal fall in April (-0.3%).”

Late Easter and ahead of the election

After the Fed meeting minutes for May, there’s almost a wall to wall expectation for an interest rate increase this month when the Fed meets on Wednesday. While the overly bullish GDP forecasts by the Altanta Fed seem to have been quietly dropped from the narrative, the mainstream financial media are still running with the 16 year low rate of unemployment of 4.3% provides the political cover for such a move.

Why let record low participation rates, sub target inflation, lethargic private sector wage and real employment growth get in the way of the chosen narrative? If rates do go up it may owe more to trying to support the US dollar, while setting the narrative for the need to pass Trump’s stimulus plans once Q2 GDP growth expectations tank.

After the solid Q1 trading performance , with organic sales up over +4.5% and EBITA margins by almost 110bps to 0.3%, investors have rallied behind the stock, perhaps anticipating an improving trajectory in margins from what is a thin and not always representative trading quarter (and which is also not reflected by the company’s own FY17 guidance as the fuel dividend reverses). On my forecasts therefore, the stock’s implied growth rating has recovered to kiss the near +5% organic revenue delivery in Q1 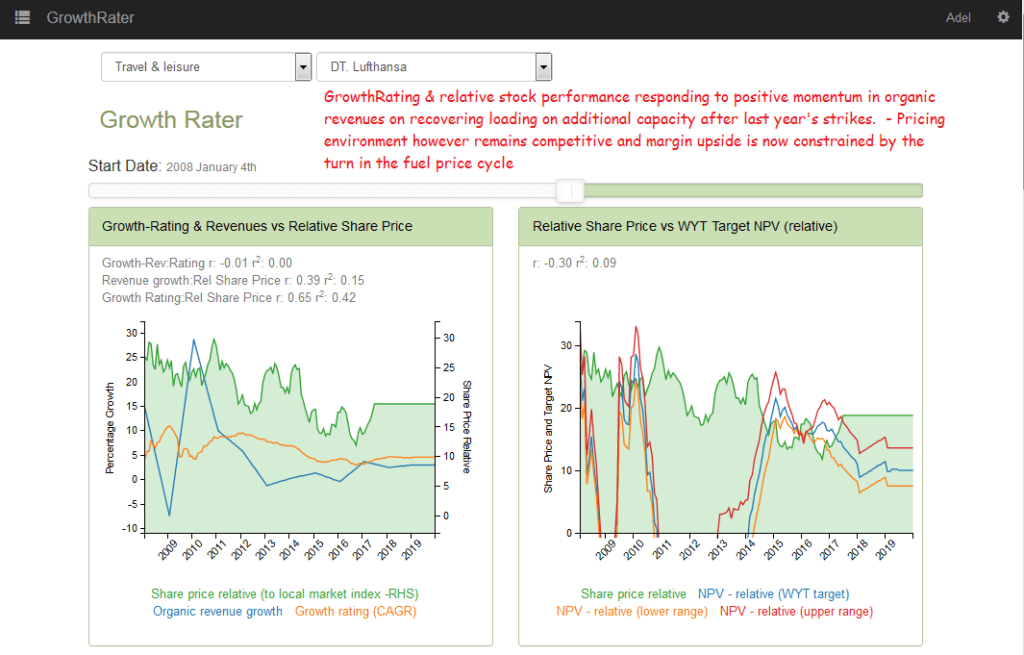