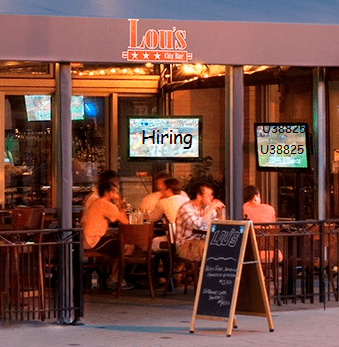 Is the BLS letting markets down gently that the US economy sucks and to kiss goodbye to a rate hike in June? Beyond the boost in February from renewed shale fracking and an exceptionally mild winter (on mining and construction job formation), US job growth into 2017 has been dire. I’m not referring to the sanitised figures pushed out by the media and financial services industry to keep rate expectations and the US dollar high, but the real numbers before they’ve been skewed by the increasingly aggressive seasonal adjustments. 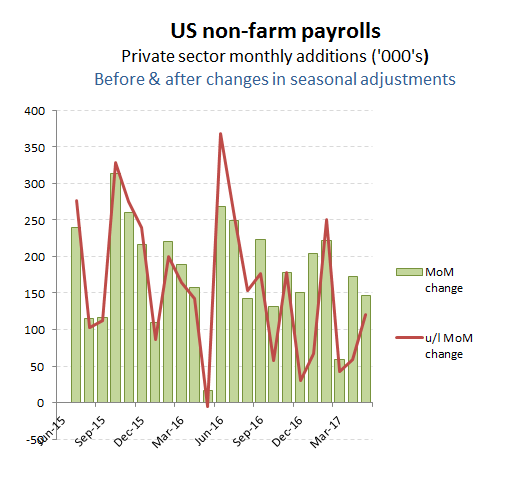 You might have been told that April job growth surged by +211k, but the real growth in Private sector jobs that month before the changes in seasonal adjustment were made was nearer +76k on the original release. Today, that latter figure has been restated down to +59k, while the comparable figure for March has been pared back from an original estimate of +54k, to only +42k. Today’s release for May of a +138k rise in seasonally adjusted net job adds (+147k for Private sector and +120k before changes in seasonal adjustments), therefore can be expected to generate squeals from the press and markets, but the reality is that it is just a slightly more honest reflection of what is really going on. Reports, such as the one below from Reuters, this morning, have continued to pump the narrative of a strong economy enabling the Fed to normalise rates on the basis to the reported BLS job data and the selective use of upbeat GDP forecasts from the Atlanta Fed, while choosing to ignore the underlying data, including the third consecutive decline in US Auto sales for May. Perhaps the Fed is beginning the realise that the old narrative is no longer washing with markets in face of the real situation and is now going to once again pull-back from a rate normalisation. My key question for markets though is what damage this does to the US dollar and whether Trump will have enough of a slowdown in expectations to still be able to drive through is tax and stimulus plans through Congress. 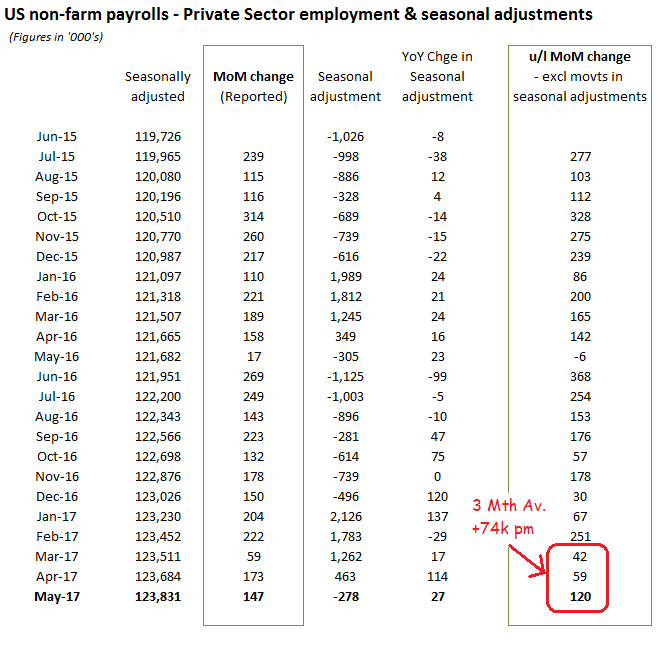 Below, is the sort of stuff being pushed out to markets up until this afternoon – you might notice that the current article on their site has been substantially amended versus the original version this morning, parts of which I have included below with my comments.

May US non-farm payrolls – the reported numbers

For those that like to extrapolate the fictional data into annual statistics for average earnings growth will see the +1.8% annualised wage increase (from $26.18 per hour in April to 26.22 in May) on flat average hours is hardly the heady stuff to excite fears of wage inflation. On a year on year basis, that represents an actual increase in Av earnings of approx +2.5%.

Av earnings up only +1.8% annualised

If Trump wanted to rebuild manufacturing jobs and raise middle class earnings, there’s little evidence in the May statistics to suggest this is working, with manufacturing employment actually contracting slightly in the month. Higher rig count and fracking activity on the oil price bounce continues to support ‘mining’, but the main areas of job formation in the month again came from ‘Hospitality & Leisure’, Education and Health’ and ‘Temporary’ categories. 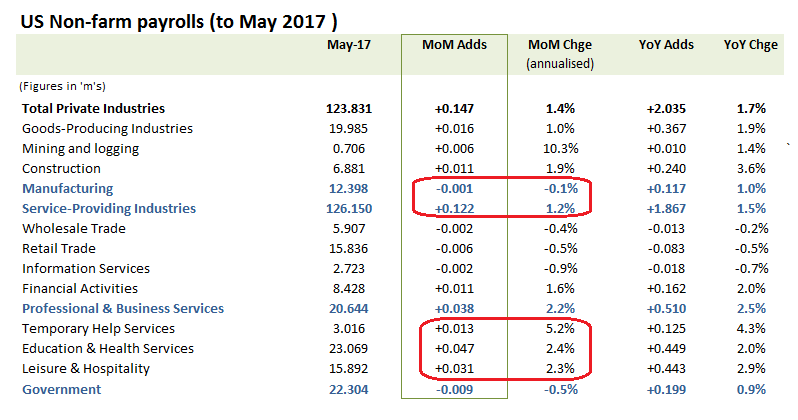 No evidence of a manufacturing revival here