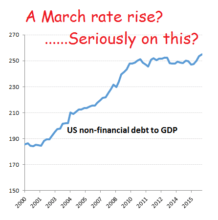 Does anyone not expect a March rate increase? After raising its Q1 GDP estimate from +3.09% to +3.19%, the +227k net private sector job adds reported in yesterday’s non-farm payroll data for February (after the +298k already reported mid-week by ADP), coming after similarly buoyant data released for January, the Fed seems to be setting the scene for the forecast rate rise.
This all seems rather tenuous however, with the Fed’s forecasting record already blotted by the decline in Q4 outrun to only +1.9% as well as the substantial padding to the recent non-farm payroll data with changes in seasonal adjustments. Strip these away and January’s reported +221k monthly increase in private sector jobs would have fallen to only +61k, while December’s reported +150k of net additions collapses to a miserable +30k. While true that February’s reported +227k on net adds benefits from a considerably less supportive contribution from seasonal adjustment changes, it remains unclear how much of the underlying improvement has been a function of companies holding back on job cuts to avoid the ire of the new President or the recovery in shale fracking activity on higher oil prices or indeed just the effect of a particularly mild February on outdoor related sectors such as construction. To base a rate rise on these factors, when exports are already being squeezed by the high US dollar and consumers remain over-leveraged would seem to be laying the ground for a somewhat less upbeat GDP and company earnings outlook for Q2, albeit this may be what is intended if Trump is ever going to persuade his ‘loyal’ party members in Congress to support his stimulus proposals. 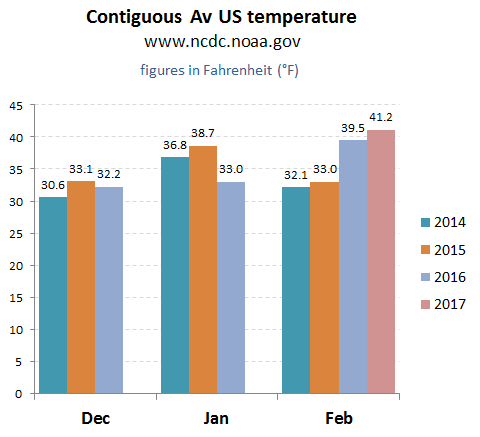 can’t blame it on the weather this time!

US non-farm payroll data for February

Reported private sector job adds of +227k still comes in at a respectable +215k, even without the change in seasonal adjustments, which for February add only +12k to the underlying figure.  Exclude the changes in seasonal adjustments however, and we can see that this represents just a single month of recovery against a still declining trend, when measured as a 6 month moving average. Average wage data meanwhile still doesn’t justify inflationary concerns from this quarter with average weekly wages up +2.5% YoY on a -0.3% YoY contraction in average hours worked (flat MoM) and +2.8% increase in annualised wages versus January’s +2.3%.  In the context of a US dollar that is perhaps already too high for exporters and an economic policy that remains ‘work in progress’ from the new administration, the apparent narrative for a March rate rise emanating out of the Fed is either yet another attempt to constrain consumption and debt formation by talking the story, or else it really is risking a hard landing on the basis of a Q1 2017 GDP forecast and a series of heavy NFP seasonal adjustments. 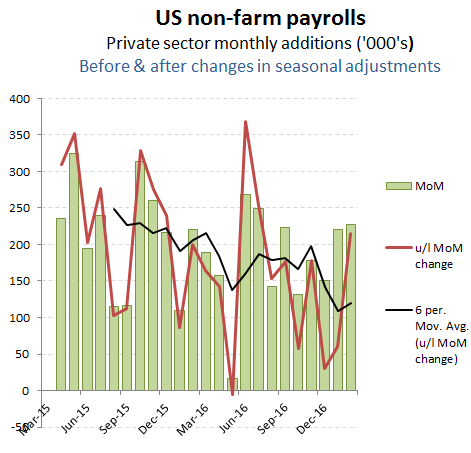 Of course the real elephant in the room is an economy that has perhaps already passed to point of no return in its addiction to credit. Don’t forget that total US non-financial debt is above 250% of GDP and still rising to feed the consumer bubble (nb, Q4’s lacklustre +1.9% GDP growth still included consumption growth of +3.0%) as past governments and central banks failed to address the stagnation in income growth by more credit and even debt monetisation by the Fed. What that mean’s is that a +1ppts increase in interest rates will provide an incremental headwind to GDP growth of -2.5ppts, minimum. The actual impact could be multiples of this however, should the Fed stop monetising debt and with the government having to fund what would become an even greater budget deficit with either additional tax or debt sales, which would further aggravate the increase in borrowing costs and result in consumers rebuilding savings ratios and cutting back on the one thing that has kept the economic party going, debt fuelled consumption. To say that Trump has inherited a mess is an understatement and the only way he can muddle his way through this is with the full co-operation of the Fed not to precipitate a bust on his watch. Consumers need to spend less and earn more in order to restore household finances, which means the continuation of low rates, but to instil the belief that they might rise, hence his campaign to return jobs to the US and threaten import tariffs to offset a higher US dollar, while Fed talks tough on rates but little else. What remains unclear is the extent to which the Fed will surreptitiously continue to buy in federal debt and if Trump’s massive stimulus proposals are another attempt to talk up corporate investment ahead of this, which would therefore diminish the eventual scale of spending needed and thus the funding risk. From the entertaining start to his administration, Trump has shown a penchant for injecting the occasionally radical and usually contentious proposition to stimulate the required reaction in order to deliver his aims. 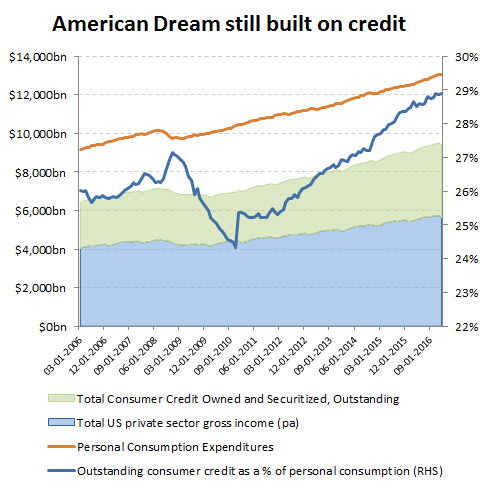 Strip out the changes in seasonal adjustments and February, was the first month in over seven months (July 2016) with over +200k of net private sector job additions 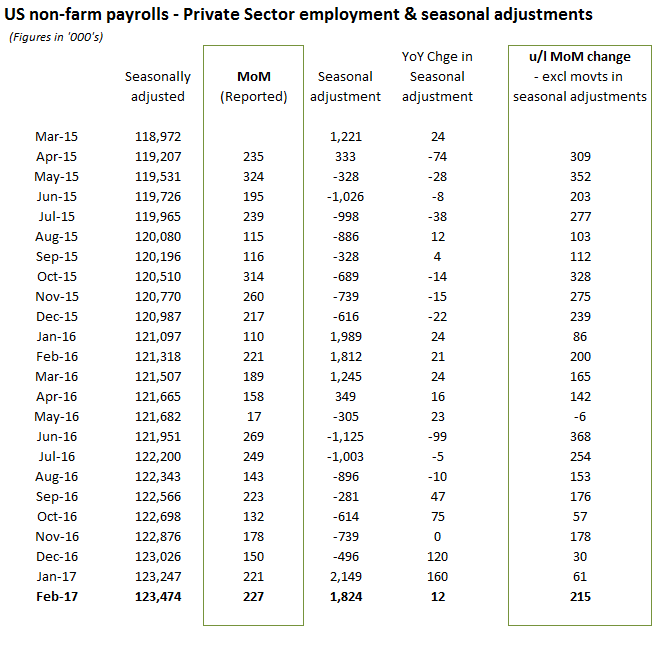 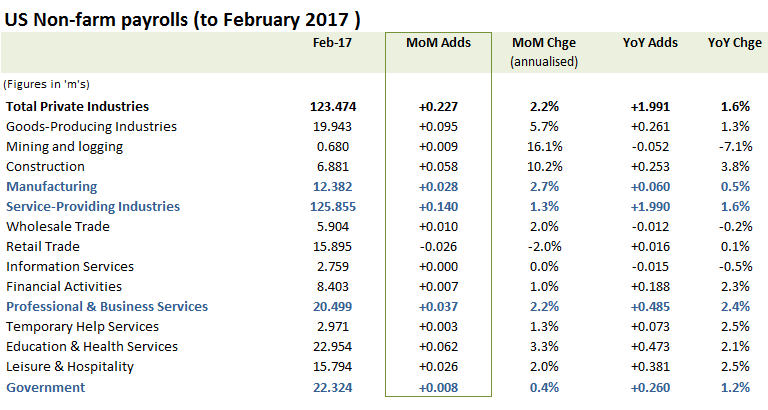