Nil premium mergers are tough to complete, particularly when a stretched balance sheet forces it to be funded with equity at a time when debt is cheap.  This is due to the target company exposing itself as up for sale, but unable to offer its shareholders a control premium beyond some nebulous longer term shared cost synergies post merger. As Churchill is reputed to have observed to Lady Astor, once the principle has been conceded, the remaining negotiations are merely about establishing a price.  Having smoked out that the business is for sale with its offer, the last thing an acquirer in these circumstances needs, is to have a third party nip in with a cash premium. Hence the need to tie in the target with punitive termination fees or equity stakes; something Middleby has surprisingly failed to do with WelBilt!  The Goldman supported approach by Ali Group meanwhile highlights the continued presence of the usual ambush predators out there. 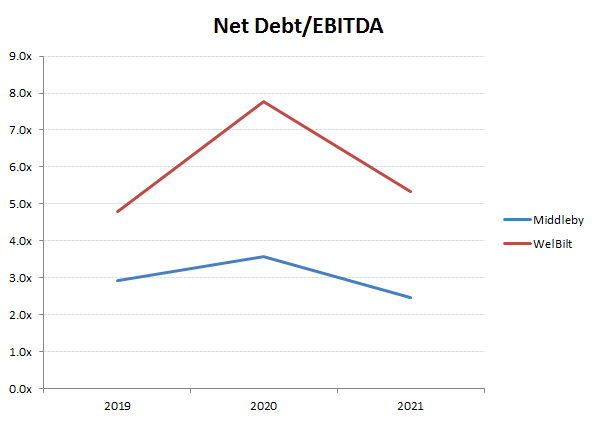 With Middleby having only just emerged from a potentially embarrassing refinancing and WelBilt burdened by an even more onerous debt burden, the combination of both was always going to have to rely mainly on an equity component.  For WelBilt the combination would dilute the debt overhang to something less scary to reduce the risk premium being priced into the shares while for Middleby,  this premium to the previous market price would still represent a similar yield as its own stock was being priced at. In effect an nil premium merger.  In my own analysis (below), the current offer from Middleby, is worth approx $20.4 per WelBilt share and an EBITA yield of 5.6% versus an almost comparable 5.3% on its own stock. 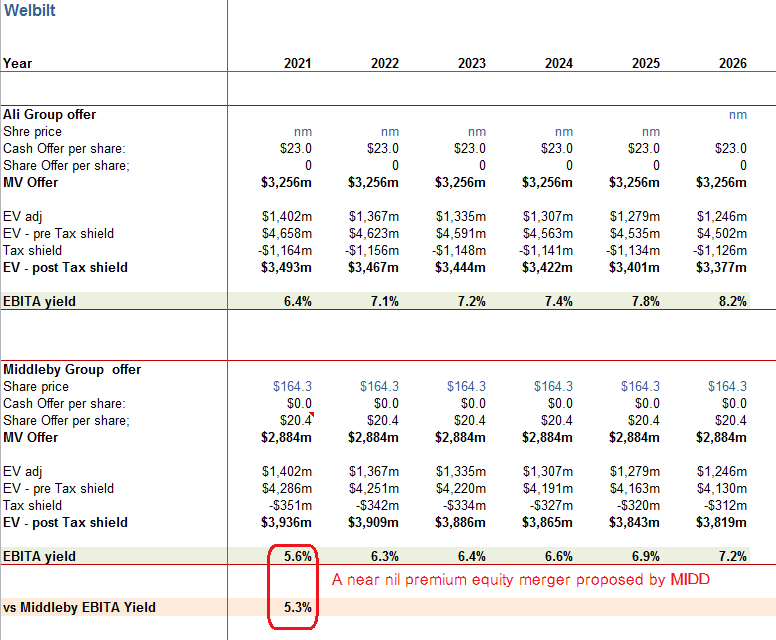 The problem however, is that a competing cash buyer would have the advantage of leveraging a greater tax shield, thereby reducing the effective net EV.  Ali Group’s $23.0 ps cash offer for WelBilt for instance is almost +13% above Middleby’s offer, but net of tax shields could have a net EV cost to Ali  around -11% less and therefore still deliver an exit yield (EBITA) of approx  6.4% compared to Middleby’s 5.6%.  Middleby will be under pressure to sweeten the offer, but is constrained from offering much in the way of cash, while the greater the equity offering, the greater the prospective dilution and therefore risk of entering a catch 22 of dilution, share price erosion and offer value.

Already with an advantage as a cash buyer, Ali Group as an Italian business might also be able to tap the ECB’s bond buying spree to assist with the funding rates, as Bayer did with Montsanto and LVMH initially proposed for Tiffany’s, with coupons of under 0.4% on new bonds with maturities out to 2031 (11 years).

With a deal value already approaching $4bn for WelBilt, the $110m termination fee will not represent much of a penalty and WelBilt shareholders who can now entertain the new offer and possible counter-offers that have been smoked out by Middleby’s approach.  Perhaps the weak hand being played meant Middleby’s advisor Guggenheim, was never going to be able to secure a better protection for its supposed agreed-offer, but WelBilt’s advisor Morgan Stanley and Ali Group’s ambush predator, Goldman Sachs, look set to come out of this smelling of roses.