Omnicom & Publicis â€“ a marriage not made in heaven

Business struggles to deliver above market organic growth and therefore resorts to sector consolidation to cut costs and obscure the maturing growth profile. It is a well enough used stratagem.Â  Pharma has been there and done it, Telecom consolidation is currently in full flood and once again, major consolidation is being proposed in the marketing services segment with Bloombergâ€™s supposedly authoritative news on Friday of the advanced merger negotiations between the number two and number four agency holding companies, Omnicom and Publicis.

At first glance such a combination may seem a value enhancing, if somewhat unimaginative plan.Â  In media, where scale really counts, the combination would combine three strong media networks, equalling WPP, but with more clout with approx. 40% market share vs WPPâ€™s c. 32%.Â  While the core creative and media networks would be largely retained to avoid too much revenue leakage from the inevitable client conflict issues (eg with both Pepsi and Coke), there would be scope for sizeable cost savings and back office (including technology) efficiencies.Â  As a rule of thumb I would expect at least +200bpts to net operating margins over the initial 3 years (net of revenue leakage) with after leveraging thru debt and tax benefits could be raising earnings by around +20% over the same period.Â  So whatâ€™s the problem? 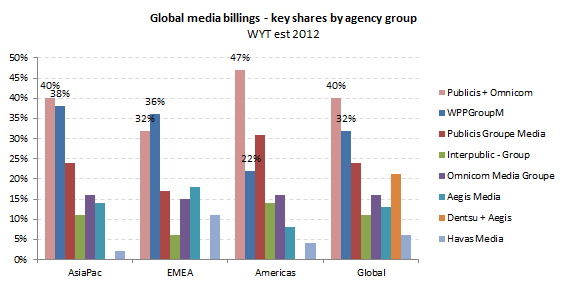 Barring the possible anti-trust issues, particularly in the US (see above chart), this story/deal smells fishy. Â Â This is being touted as a merger of equals, but has anyone pushing this story ever actually worked for a French national champion? Â Is this the same company (Publicis) that accepted the resignation in 2010 of the CEO (David Kenny) of its then US digital prize, Digitas, because he was not able to relocate to Paris? Is this the company with a restrictive voting structure and a decidedly Gallic flavour to its supervisory board which includes the daughter of the founder as Chair and two of his grand-children and an executive board headed by the archetypal suave Frenchman, Maurice Levy from his offices overlooking the Arch de Triomphe?

In addition to the inevitable cultural clash, the strategy embarked by each group has also been very different. Omnicom has eschewed large acquisitions while Publicis has aped WPP with a spectacular pace of corporate expansion, particularly with its recent digital acquisitions.Â  If Publicis still believes that these will deliver the growth and returns, why is it selling out on a nil premium merger basis to the Americans who have invested less in these tools and services? It is not as if Omnicom would provide a significant advantage in geographical coverage or exposure in growth markets given both companies heavy exposure to the US.Â  If Publicis was just after a third media network and more Asian exposure, it could have always have pursued Aegis again, which it didnâ€™t. Â Â If Publicis is seriously selling out control at this stage without a significant control premium it should sound a warning claxon as to what they know that markets donâ€™t.Â  Has there been a dud or two amongst its vaunted digital acquisitions that is going to bite them where it hurts?

A brief history of these groups by charts

1)Â Â Â Â Â  Touted as an above growth segment, agencies have failed to deliver above GDP rates of organic revenue growth, notwithstanding the network benefits of folding in acquired new skills. Since 2000, there really has not been much to separate the top 3 players (WPP, Omnicom and Publicis) in terms of cumulative organic revenue growth; all of which have substantially lagged cumulative Global GDP. So much for the organic growth story! 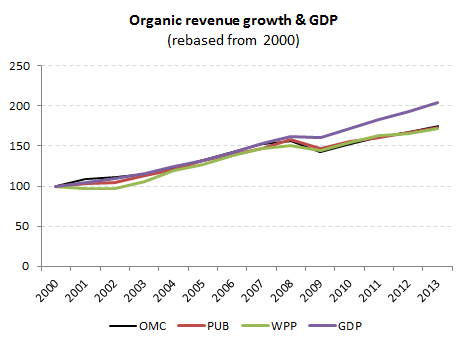 1)Â Â Â Â Â  Margin expansion. If you canâ€™t out-grow on the top line, try to make up the slack on the bottom line. The first stop of course is EBITA margins (then capital structure and tax). Downward pressure on gross margins from clients however makes this tough to achieve, particularly if you have to invest (internally) in new service development. No problem, just buy in these skills with acquisitions where the previous development spend will sit unamortised on your balance sheet as an intangible. As investors tend to exclude the arbitrary amortisation of acquired intangible, this provides a free get out of jail card while stripping out overlapping operating costs to deliver on the margin story. 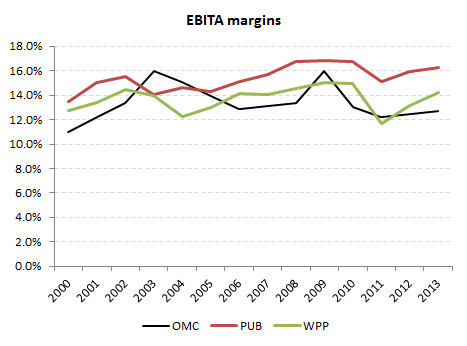 1)Â Â Â Â Â  Not-withstanding all this, the â€˜underlyingâ€™ EBITA story is not particularly impressive with only Publicis running ahead of GDP. But with enough financial leverage, falling interest rates and all that US tax relief on acquired intangibles, the sector can deliver what the market thinks it wants and thinks it is getting, above market EPS growth.Â  With multiple of billions of Â£/$/â‚¬ of acquired intangibles on each groupâ€™s balance sheet however this is somewhat of a moot point. How much of this is really being consumed is tough to calculate, but even a 15 year amortisation could more than halve the perceived returns of some of the groups. Well worth remembering when someone tries to flog an earnings based valuation to you. 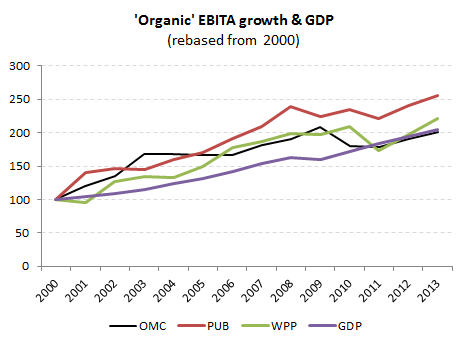 1)Â Â Â Â Â  Acquisition ROI? Although the below table does not attempt to apply an amortisation for consumed acquired skills and services (intangibles), the implied pre-tax returns do not suggest either significant growth from acquisitions unless the core businesses are in decline. Having spent least on acquisitions, the implied real ROI by Omnicom heads up the pack with both Publicis and WPP languishing at only around 8% if one assumes an inflation adjusted Â market average growth of +2% pa over the period (15 years). 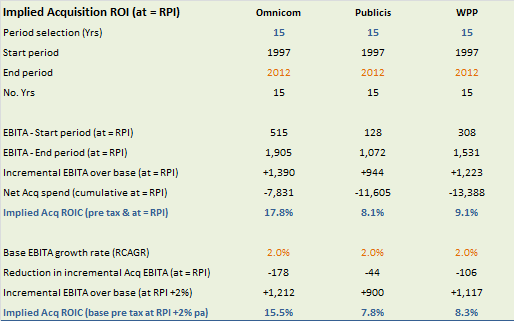 Valuation by growth rating â€“ added without comment or recommendation 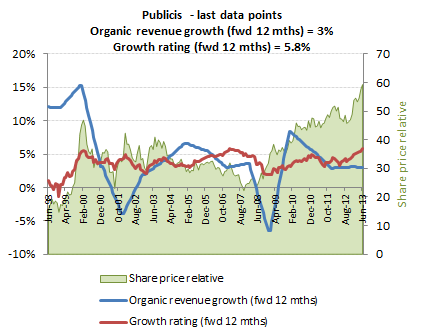 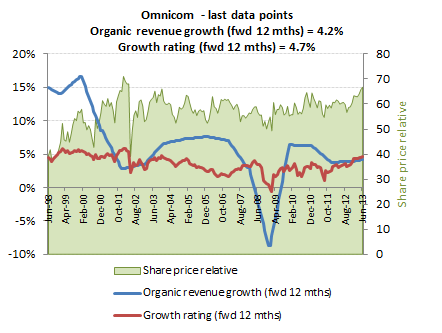 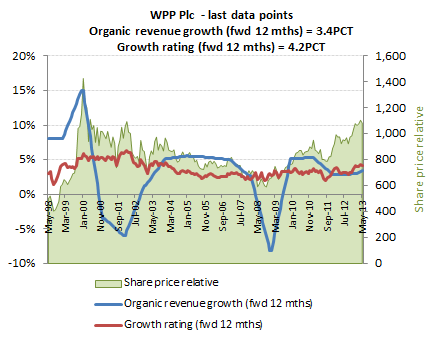 Krafting an exit after struggling to restore growth