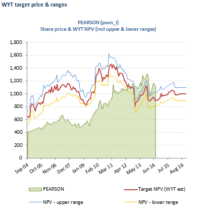 Markets took a little time to appreciate the current cyclical and structural squeeze on profitability, but eventually got the message. So far, that message is pain today as the group invests to extend is leadership in digital learning through a protracted cyclical downswing in its main markets followed by jam tomorrow as these measures yield returns and their accompanying costs drop away as early as FY15. This time-scale, may or may not be realistic, but having been strung again by missed expectations, markets may first wish to see some tangible evidence of restored organic revenue growth before wishing to reach out and discount the â€˜recoveryâ€™ in FY15 and beyond. As usual, the lightly weighted H1 provides little hard evidence on progress, with this yearâ€™s results incurring a further Â£14m of restructuring charges, but offset by a slightly more favourable phasing of US educational sales than usual in the period. Having re-arranged the reporting structure into the somewhat opaque new divisions (including â€œGrowthâ€ and â€œCoreâ€) meanwhile, transparency into the businesses is not improved (FT is now â€˜lostâ€™ and is Brazil really â€œGrowthâ€?), investors are therefore increasingly dependent on the narrative from management as to whether the current investment will actually deliver. For the moment, the focus seems to be on the cost fall-away into 2015 rather than any particular revenue growth commitment.

OUTLOOK: FY14 expected to remain a transition year with continued cyclical headwinds from US & UK educational markets, but with lower restructuring charges, albeit partially absorbed by additional NPD expenditure and the adverse impact of fx movements. On a net basis, the group is re-iterating its FY14 adj EPS forecast range of between 62-67p on the 28 Feb fx rate ($1.666 vs the current $1.697). 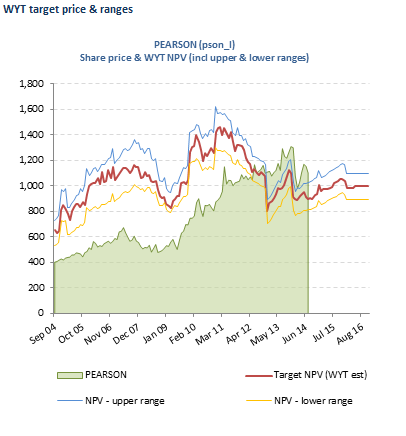