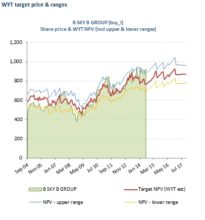 BSkyB: OK, so whatâ€™s the narrative to be? 21st Century Fox (Murdoch) parks some low yielding European payTV assets into a 39% owned subsidiary to raise at least Â£4.6bn of cash to help fund its (Murdochâ€™s) $80m Time Warner bid? As long as the market thinks that he will be back for the lot at a later point, with another full bid for BSkyB, once the phone hacking ruckus has died down, then he gets the cash, keeps control and supports the shares; which could always be re-hypothecated for some more funding.

What about the core business? Last yearâ€™s stalled profits can in part be explained by the heavy step up costs for the new Premier League contract and bulls can point to the still healthy advance in revenues of +7% and the prospective rebound in profitability in the coming year as programming costs stabilise. The uplift from the revised Premier League contract however was a symptom of the changing distribution landscape and was not the only source of cost inflation to the group. To support all those new services came at a price, with Direct Network costs (+15%), Transmission & Technology (+11%) and Depreciation (+12%) all running well ahead of the +7% revenue growth. If the above is the problem then, is the decision to buy Sky Italia and at least 57.4% of Sky Deutschland the solution?

Both Sky Deutschland and Sky Italia could be said to offer potential, but this could also be said of them many times over the past decade, while neither of them are particularly cheap on their current trading trajectories. Sky-D subscriber numbers and revenues have been flat-lining for years while the purchase price of â‚¬6.75ps values these subscribers within 10% of BSkyB’s on a per subscriber basis, yet with under half the revenue per subscriber generated. For Sky Italia, the growth record is better and the take-out price less onerous, although still struggling to generate much of a return. Even with the Â£200m pa of projected savings by end FY17, these would represent less than 1.5% of combined sales and less than an additional 3pps return on the combined gross purchase price. With limited scope for joint rights purchase efficiencies or revenue synergies it seems investors will have to make a leap of faith here.Â Â  Having already had access to the best pay TV managers in town (including from BSkyB), it is also unclear what special sauce BSkyB will bring re-invigorate these two assets.

The â€˜dealâ€™. Excluding associated loan stock buyouts, BSkyBâ€™s proposed purchase commitments are between Â£4.97bn and Â£7.1bn, dependent on the proportion of Sky Deutschland that is tendered; from Foxâ€™s 57.4% to a full 100% that is also being tendered for under German listing rules. To fund this, BSkyB is raising approx. Â£1.37bn via a placing of 156.1m new BSkyB ordinary shares (9.99% of the enlarged issued capital), with Â£382m funded from selling Fox BSkyBâ€™s 21% stake in National Geographic and with the remainder funded by debt (possibly up to a max 2.9x debt/EBITDA). To maintain its 39.1% holding in BSkyB meanwhile, Fox will be taking up its entitlement. From Foxâ€™s perspective, the disposal is worth approx. Â£5.35bn gross (Â£2.9bn for its 57.4% of Sky Deutschland and Â£2.45bn for the 100% of Sky Italia. As Â£382m will be part paid for by BSkyBâ€™s 21% stake in National Geographic and Foxâ€™s share of the placing will cost it around Â£730m, the net cash receipt for Fox should be approx. Â£4.24bn. 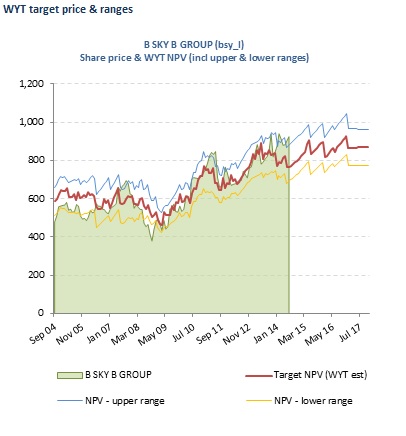