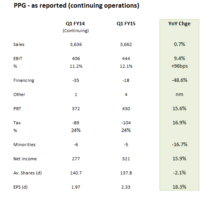 As with every reporting season one can play the game of â€œspot dodgyâ€. Unfortunately, the deluge of quarterly results with their more limited disclosure can make it tough to identify some of the more sophisticated scams. As always these can include the myriad of acquisition accounting tricks (fair value adjustments, acquisition timings, accounting policy adjustments, off-balance sheet manipulations etc) as well as the more obvious ones that simply park the inconvenient expenses into a bucket called â€œone-offâ€ or â€œnon-recurringâ€ which are all too ongoing. Playing around with tax provisioning and using low funding costs to re-purchase shares to bump-up EPS growth in attempt to have this mistaken as value creation are now old hat; everyone seems to be in on this one.

While updating my models for the quarterly results I was reminded of another ploy, â€˜scopingâ€™. Although hardly novel or sophisticated, it involves simply changing the scope of the operations that you want investors to focus on and to obscure those that may not suit. A business that under-performed can be classified as non-core and â€œto be discontinuedâ€ which under IFRS and also seemingly US GAAP can from then be reported â€˜belowâ€™ the line with the revenues and other operating numbers excluded from the main body of the P&L. Having excluded the bad stuff into what becomes little more than a footnote in the accounts, companies can then impress the markets with how well they are managing all the remaining good stuff â€“ genius! Of course, this trick is also great to use as a way of restating down previous results where the lowered comparatives are used to show the upward only progress in â€œcontinuingâ€ earnings and EPS, even when the exact opposite is occurring. As memories are short and there are simply too many quarterly announcements for investors and commentators to take to time to do the proper leg work, the narrative that invariably appears in the financial newswires and markets is the one that has been crafted by the company.

A good example of this was with PPGâ€™s Q1 results that were released last Thursday (16 April). Having sold its Opticalâ€™s JV last year for a short $2bn and re-invested most of this back into a Mexican coatings business (Comex), there were obviously a few moving parts to take into account when analysing the ongoing performance. It would seem understandable therefore that the group might wish to present a review of the underlying business performance. Unfortunately, by excluding the operating results of the disposed optical activity while including the acquired business fails to do this and creates a fictional scenario where the results of part of the group are excluded into the prior and comparative period, yet the contributions from the business acquired by applying the disposal proceeds are included in the following periods; a classic case of having ones cake and eating it. 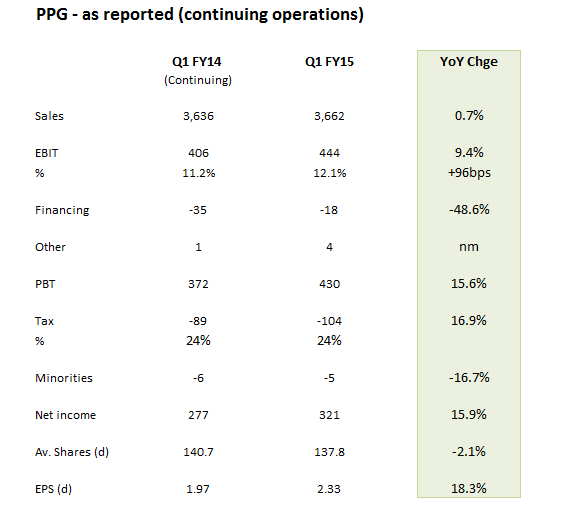 Looking good on a “continuing” basis

Although, the net contribution from the entire group is recognised within the P&L, only the â€œcontinuingâ€ operations are represented above the net income line. As the â€œdiscontinuedâ€ contributions net off the operating contributions of these businesses with any impairment write-down or gains, these often do not provide a representative picture of their underlying performance unless you want to route around in the notes to the accounts. Unsurprisingly, not many investors will bother to do this, preferring to rely on the groupâ€™s analysis of â€œcontinuingâ€ activities instead. As PPG booked a gross disposal gain of $1.5bn in its Q1 FY14 (approx. $915m net), the US GAAP EPS figure for this period of $8.97, including $7.00 from discontinued, was not particularly meaningful. The only alternative metric provided investors meanwhile are the â€œcontinuingâ€ figures. On these, the Q1 FY15 results reveal a relatively steady revenue line considering the dollar appreciation in the period, but an increasingly impressive performance as you drop down through the P&L. Revenues +1%, EBIT +9%, Margins +96bps, PBT +16% and EPS +18%. Clearly some great cost management at work and assisted by debt refinancing and share buybacks? Wrong, think again! Although the contribution from acquisitions has not been broken out from these figures we can see what has been excluded from the comparatives, and re-stating these alters substantially the perceived performances of the â€œcontinuingâ€ results.

When one disaggregates the Q1 FY14 â€œdiscontinuedâ€ results into their component parts we can see that these included a non-operating disposal gain of approx. $913m within the $985m of net income. Excluding this, operating results included EBIT of $104m and net income of $72m, which would have added $0.51 per share if included in an overall operating EPS metric for the group. Sales of $247m meanwhile were completely excluded from the group P&L. 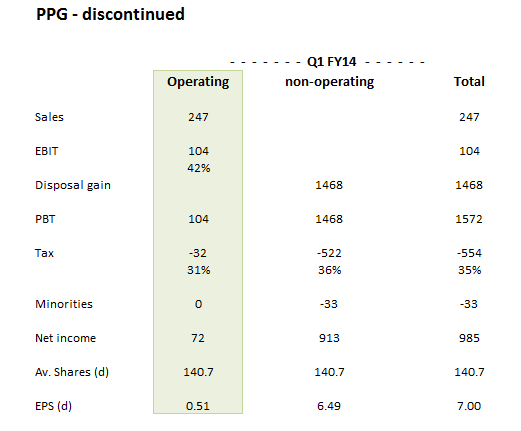 Presenting PPGâ€™s Q1 FY15 adjusted results for the businesses as owned by the shareholders, but to exclude the non-operating book gain therefore offers a somewhat different perspective on events. Revenues are lower, although that should not in itself be a concern. Indeed, under a more relaxed recognition to include proforma sales from Comex, the Group might have been able to announce a slightly better organic sales growth than the +1% reported for the â€œcontinuingâ€ activities. EBIT, PBT and net income however are all down heavily on what would have been a more accurate analysis of actual performance and notwithstanding the refinancing and share buybacks, Q1 FY15 EPS of $2.33 ps was in fact down by -6% YoY; somewhat less impressive that the +18% highlighted by the company. 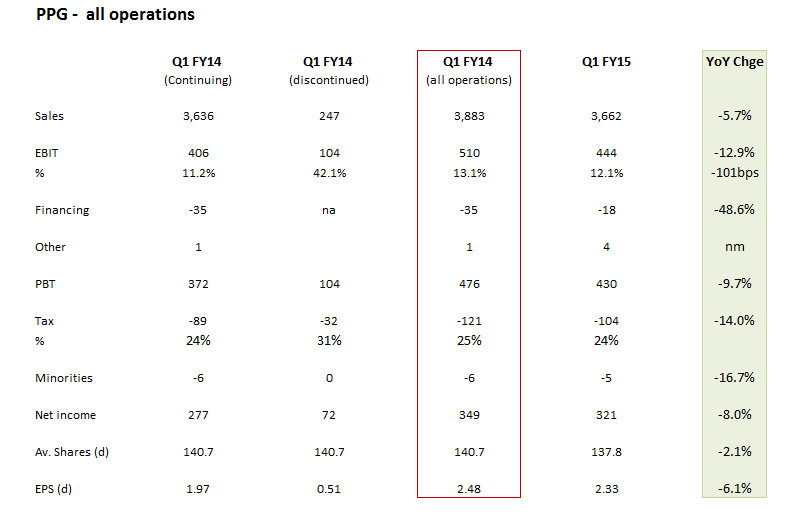