The need to look beyond the quarterly agencies reports 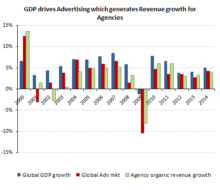 My iPhone weather App is like a set of Agency results.Â  It gives me a largely coincidental view of the weather if I donâ€™t want to look out of the window, but is pretty useless as a meaningful forecasting tool.

With two of the big four agencies reporting, are we much the wiser?Â  Omnicom edged itâ€™s organic revenue growth ahead to +4.1% against slightly easier comps while those at Publicis were a little easier at +3.5% against tougher comps. Â Both groups did over +7% in the UK and >+4% for the US and Europe is touted as being through the worse; albeit at +0.4% for Publicis (including the UK and some strong performances across parts of Eastern Europe), this is not particularly meaningful. Of greater interest was the weakening trend across some emerging markets, in particular India, Brazil and even China, the latter two at +3.4% and +2.4% respectively in the period for Publicis.Â  Quarterly trends of course are notoriously volatile and Maurice was careful to point out the its Zenith advertising forecasts for 2013 remain unchanged at +3.5% while suggesting a figure of nearer +5% was expected for a â€œvintageâ€ 2014.Â  But did I detect a hint of concern behind the bravoure when alluding to weakening market earnings expectations and the fourth quarter? As a discretionary expenditure, marketing costs come straight off company profits, and as such budgets can be vulnerable, particularly when companies need to salvage a year-end earnings forecast.

â€œNo problemâ€ according to the majority of market pundits and economists.Â  GDP expectations may have eased for 2013, but 2014 is forecast to be better. Europe is allegedly through the worse even, Â for Spain and the US debt issues are surely just a bump in the road ahead of â€˜MOARâ€™ from the new Fed chairman.Â  With the GDP wheels greased with endless liquidity, so goes marketing expenditures and as a consequence the good times for Agencies. 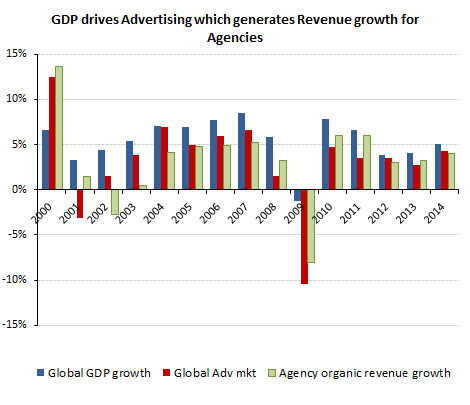 Somehow this all seems a little Panglosian and it canâ€™t have escaped a Frenchmanâ€™s attention that all may not necessarily be at its best in the â€˜Jardinâ€™. Â So letâ€™s look at some of the evidence.

Financial repression of the market cost of capital may be engineering a rise in asset prices, but it has done little for GDP forecasts which have dropped by around 70bps over the past year. A lower base may assist the comparative rate of growth for 2014, but Western economies still face the great de-leveraging and have hardly even scratched the surface in preparing for the impending demographic time bomb. Economists and politicians keep on reaching out for â€˜green shootsâ€™ but these are again proving illusionary.Â  Can the Fed keep on funding the US deficit and if not what then for interest rates and growth expectations? 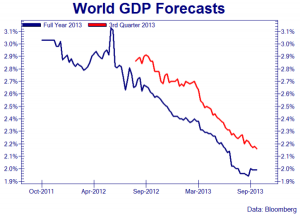 Companies guide markets on short term expectations and aim to over-deliver.Â  Notwithstanding the immediate puff of headlines of quarterly forecast beats, the longer term trend is less positive. Â This is the third year when initial earning expectations have proved far too high, despite $85bn per month of Fed liquidity. On the below analysis from Morgan Stanley, 2014 earnings expectations for the S&P 500 are almost back to where 2013 was originally forecast which in turn was only around 5% above the top estimate for the prior year, 2012! This may be ignored by what has become a financial command economy, but it will have been felt by the companies themselves as well asÂ  anticipated by their suppliers. 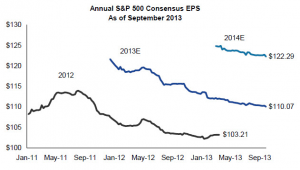 The squeeze on corporate revenue growth is not new. What is interesting with the current Q3 earnings season to date however is that the earnings misses are on the increase, albeit still outnumbered by revenue misses . Â In its recent analysis of results to 10 October, Factsetâ€™s research, average YoY revenue growth of +2.2% compared with expectations of +2.5% at the start of the month while average earnings growth of only +0.8% had dropped from +3.5% over the same period.

But, donâ€™t worry, analysts have only marginally trimmed their Q4 earnings forecasts, from +10.1% to a still healthy +9.8% over the past month! Â With a strengthening US dollar working against US dollar earners in some markets (eg US$ +20% vs Yen), expect management to be scrambling around for things to cut in an attempt to make these ambitious Q4 numbers. In these circumstances, why wouldnâ€™t a smart CEO not be concerned that some of this might come out of his industryâ€™s pot? 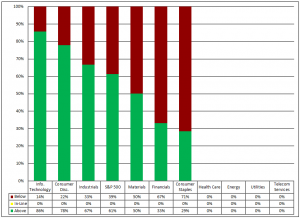 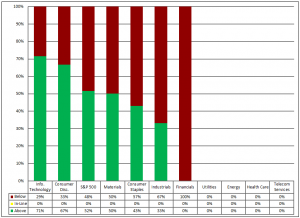 Omnicom & Publicis â€“ a marriage not made in heaven