May represented another month of aenemic employment growth, with seasonally adjusted private sector additions of only 82k, after April’s revised +87k and expectations of around +150k. Including a further contraction in Govt employment (of -13k vs April’s -10k), overall monthly employment increased by a mere +69k vs April’s +77k and Q1’s average of +252k pm.

While bad enough, the increase in temporary employment disguised a less encouraging underlying performance. Part-time workers for “economic reasons” (ie because they could not get full time employment), increased by +245k in May, from 7,853k toÂ 8,098k. This implies an underlying contraction in full-time employment of -163k inÂ May vs April.Â Â With theÂ unfolding crisis across Europe andÂ slowing econonic growth out of China andÂ also Brazil, the increased reliance on temporary workersÂ is perhapsÂ unsurprising, but it also could herald a reversal in the overall headline numbers should the weaker prospective demand translate into a cull in these temporary jobs further downstream. With a close correlation between this US employment growth and equity markets, the deteriorating employment situation provides yet another component to an increasingly sharp correction in equity prices. 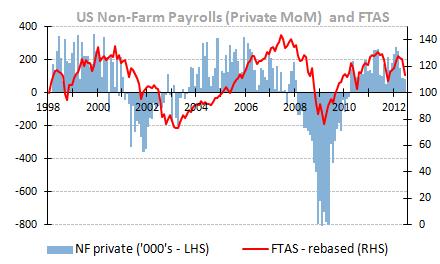