Yell – haircut for debt holders, but implications for the equity?

When debt holders are prepared to sell out at only 35% of face value, what does this say about the value of the equity?Â  Aptly timedÂ for Friday 13th, Yell announced the first tranche of its Â£159m debt re-purchase programme with the purchase of debt with a face value equivalent to Â£137.5m for consideration of only Â£48.1m; a 65% haircut for debt holders. At this rate, the full Â£159m of re-purchases would equate to over Â£450m at face value and cutÂ Yell’sÂ reported net debt of Â£2.7bn by about Â£300m, equivalent to around 12p per share and over double the current share price of 5p.

5p however is possibly considerably more than the business is worth however, if the group’s debts are recognised at face value.Â  We estimate that group EBITA could break below Â£300m within the next 18 months and continue to erode thereafter. On a 30% average tax rate and 100% cash conversion this would suggest an operating Free Cash Flow (FCF) of little more than Â£200m. With cyclical pressure remaining in its Spanish and UK markets andÂ structural decay inherent across the entire print activities (still over 2/3rds of revenues) this might be hard pressed to justify a zero growth assumption and therefore an operating FCF yield broadly in line with the market equity cost of capital which we estimate is currently standing at around 11%. Discounting Â£200m at 11% however, grosses up to only Â£1.8bn, which is still well ahead of the remaining debt liabilities of Â Â£2.4bn (assuming the same debt re-purchase discount to face value for the remainder of the Â£159m programme).

The question for both remaining debt holders and equity participitants meanwhile is whether Yell can fund further debt repurchases and the level of discount that it can achieve. If the entire debt could be re-purchased at 35% of face value, then a Â£2,7bn liability would shrink to under Â£1bn, thereby exposing a considerable upside for equity holders against an enterprise value of up to Â£1.8bn. Of course in the real world, the discounted value of the debt would rise as the risk of default reduced, therefore limiting progress for the equity. The company’s announced debt repurchase also does not reveal which tranche of debt was re-purchased and the likelyhood is that it represents the riskier end of the debt profile and therefore one ought not extrapolate too many conclusions from what is still a relatively small part of the debt liability.

At current levels, the shares are discounting more than the the business is able to generate, with a FY13 growth rating of over +2.5% CAGR, still well ahead of both medium term top line growthÂ or the group’s longer term growth potential. With the equity representing a mere 5% of the overall enterprise value however, the shares are more akin to a leveraged warrant, where small potential changes in assumptions, such as over the fair value of the 95% of liabilities, can have a significant imact on the 5% remaining above the water. 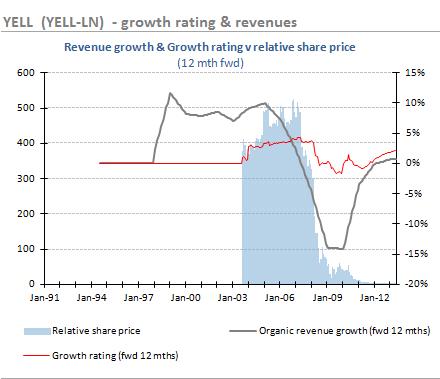