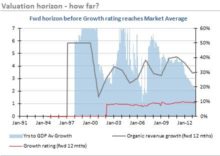 Amazon – You can deliver growth, or margins, but woe betide a ‘go go’ growth stock disappointing on both metrics. In our analysis of the relationship between revenue growth and growth ratings of what we called the “super-growthers” we had identified the correlation between the rate at which revenues were growing (and expected to grow) ahead of the market and the number of years the market was prepared to reach out for the valuation to revert back to a market average growth rating. When looking at this relationship for groups such as Google, Ebay and Yahoo, what was also apparent was that the transition from a ‘super’ to a mere mortal could prove to be precipitous once the prospective rate of revenue growth sank towards +20% YoY.

For Amazon, Q4 revenue growth at +35% is still far from falling into this category, although the deceleration, when combined with this year’s margin pressure, as the group subsidises its Kindle Fire, has clearly spooked the markets. While markets will need to take stock of how much of this really represents a structural down shift in growth rather another seasonal lull in Q4, the valuation horizon has now almost halved, from over 4 years to under 2.5 years before reverting the group back to a market average growth rating. Unlike for Google, Ebay etc however, Amazon has not had the offsetting trade-off of higher margins as the group is still very much being run for growth, notwithstanding that markets remain undecided on the Kindle Fire strategy and returns. As such, Amazon’s current valuation has entered that twilight zone, caught halfway between discounting the threat of a maturing growth rate, but still expected to delivering 30% plus annual revenue growth until out to FY14 on current consensus forecasts. 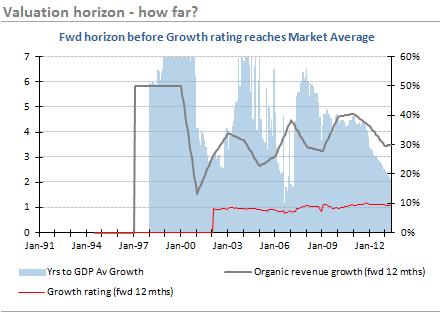 If the valuation horizon is sensitive to the absolute rate of revenue growth, Amazon’s relative share price performance has also reflected the directional changes on revenue growth momentum. The relationship however is reactive rather than predictive. Slowing rates of revenue growth, as seen in Q4 (albeit marginally) have invariably depressed the shares but have provided limited relevant insight to the medium term direction of revenues. If the market is currently fretting over a small initial ‘loss’ per Kindle Fire sold, at some point its attention will turn to the millions of marketing portals out there providing marketing information and driving traffic back to Amazon, to the benefit of both revenues and margins. 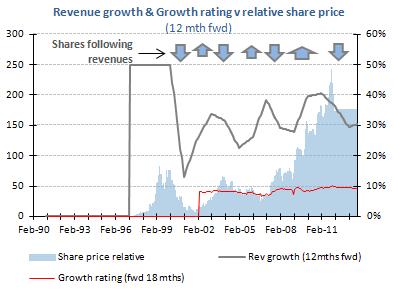 Valuation summary
At 2x revenues for a sub 2% operating margin, Amazon is clearly not being valued on last year’s metrics. With revenues growing by around +30% pa however, we estimate that the markets will be reaching out to FY15, where the multiple of revenues could by then be under 0.5x. The question then is the extent to which Amazon’s existing scale advantage and prospective acceleration in online content sales will drop through to margins. At this stage, given the managements propensity to trade margins for further growth, we factored in what we regard as a relatively undemanding EBITA margin recovery by FY15 to 5%, which after discounting a broadly market average growth rating equates an NPV of 158p and our target entry level. 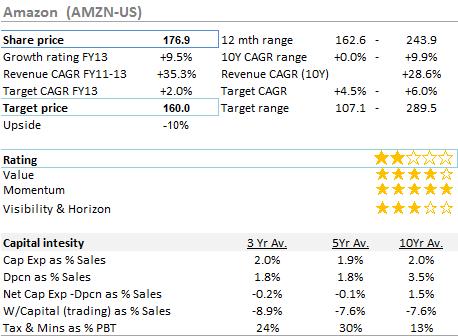