“Boycott Elsevier campaign”
The issue of Journal pricing is one that refuses to die. Normally, the rhetoric gets fired up in the run up the year-end subscription renewal season. This time however, those negotiations passed relatively quietly and it was the support of SOPA/PIPA (Stop the Online Piracy Act/Protect IP Act) by the large media owners that has spawned the current â€œBoycott Elsevierâ€ movement, which has already garnered over 3,000 signatories in its first month. Although probably representing less than 0.2% of repeat Journal authors, the campaign has been generating adverse press coverage (//www.guardian.co.uk/science/2012/feb/02/academics-boycott-publisher-elsevier) which has been enough to elicit a response by a somewhat defensive Elsevier. (//www.elsevier.com/wps/find/intro.cws_home/elsevieropenletter)

Will this movement succeed, when similar campaigns after the establishment of PubMed Central failed? A similar petition to support open access journals attracted over 30,000 signatories in 2001, but lacked momentum in converting this to action. Like old age, commercial journal publishing is better than the alternative. Yes, journal pricing seems excessive and the model of getting, often as not, Govt funded scientists to author and peer review articles for free and then have their paymasters buy-back access to this research through journals (which may be making margins of over 40%) seems little short of absurd. Journals however, are less about disseminating scientific discoveries than establishing a currency to measure scientific achievement which is essential in determining funding. In this function they actually work quite well and as such have been surprisingly resistant to being displaced, particularly by the proposed author pays model. Open archive though does present a challenge, not so much to the fundamental model, but to the prospective growth in industry revenues. As Govt paymasters increasingly mandate that publicly funded articles are to be made available on open archives with a shortening exclusive window for the commercial journal owners, this will inevitably have the effect of displacing paid subscriptions and/or limiting journal subscription pricing power. As a consequence, we continue to see the segment as having a slowing growth profile (from c.+4% pa to nearer +1-3% pa) rather than facing a catastrophic collapse, not that either of these seem to have been priced into purer play journal publishers such as J. Wiley, which continues to trade on a growth rating in excess of +4% pa (CAGR).

For Reed Elsevier, we estimate a group average trend growth potential also of just over +4% pa (CAGR), although within the mix, we estimate under +1.5% CAGR for the 25% of group operating FCF generated from Journals (see below).

Valuation: A +4% growth business priced at +4% doesn’t look too exciting, when the divisional trading performance is mixed and management is reluctant to entertain a more radical review of the current business portfolio. Next week’s FY11 results announcement however is unlikely to contain anything too nasty and the 3% prospective dividend yield on the final (4% for FY11) should provide an element of compensation. 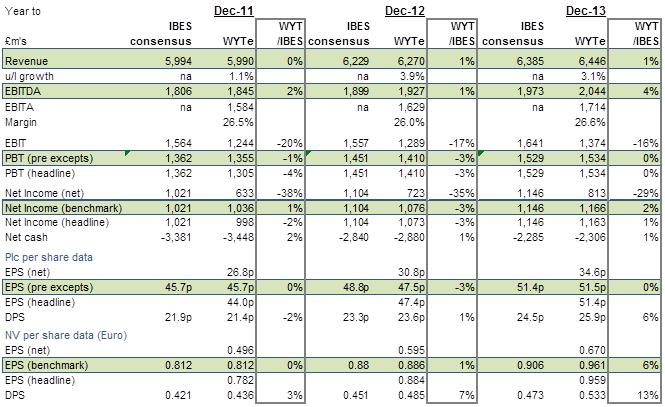