With Dover shut by the Frenchies and restaurants in large swathes of the land shuttered by an AWOL government, Tiny Tim will at least be able to bring home some of our own great domestic produce for what used to be the festive season. In season Turbot, Lobster and scallops from our cold waters or pheasants, ducks and geese from our skies or ‘Rosbif’ and lamb from our pastures and finished off with a mature stilton washed down with a single cask, single malt; I wish my compatriots a Merry Christmas and Happy & Prosperous New Year. Shame they won’t be allowed to share it with too many of their friends however, if they are adhering to Order 6(6). As for the many assaults on our freedoms and intelligence, don’t get mad, but remember all of these at every subsequent electoral event and get even.

My deepest sympathy however, goes out to the large number of hard working and often highly talented restaurateurs and staff who have been poorly served by what can only be described as incoherent and ineffective government and restrictions that seem intent to return us to the culinary desert of the 1970’s. With suggestions that the Wee Krankie is even considering enforcing a 4 day week up in Scotland, this is even sounding like the 70’s, which with lockdown haircuts may also soon look like it. 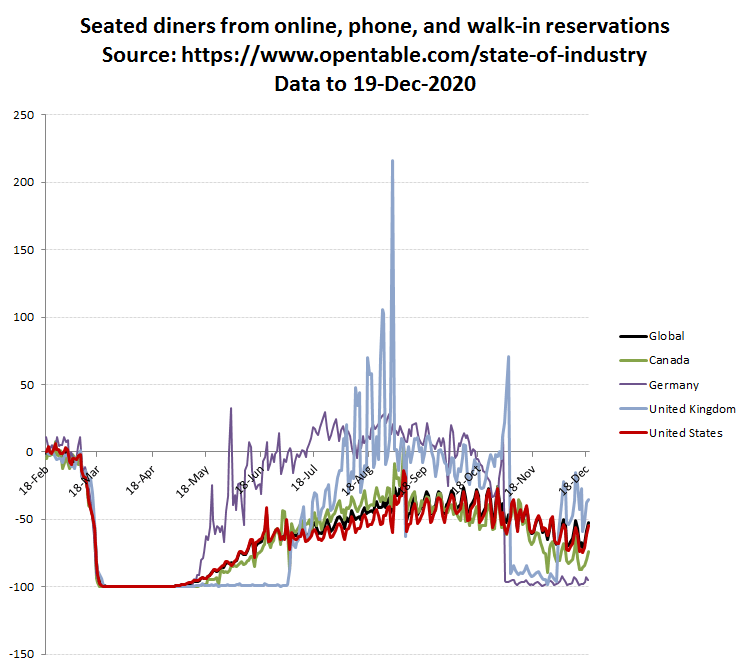 As for the great pandemic, well this continues to fixate media and virtually every aspect of political and economic life, with ‘second-wave’ hysteria returning us to lockdowns, double-dips, more monetary financing and presumably the inevitable currency crises and attempted ‘resets’ at the end of all of this unless some sanity and honest financing can be restored; albeit unlikely with the current crop of political carpet-baggers running the show.  In the UK, the spike in deaths back in March/April, when taken in context with the limited information on this virus provides some plausible justification for the panic reaction by the Government, albeit much of these excess deaths can be placed firmly at their door, with unchecked entry into the country (15-20k per day just from flights), commuters continued to be packed into public transport (particularly in London, where tube train reductions actually increased the passenger density – insanity!) and of course the ‘piece de resistance’, the co-mingling COVID and other patients, including sending infected hospital patients back to care homes to infect and kill off many of the other residents.  Instead of recognising that the vast proportion of young and healthy people are largely unaffected by this virus and focus the investment on those with vulnerabilities (the old, fat and sick), the government instead has chosen to incarcerate everyone and bankrupt the economy, thereby increasing the damage to the rest of the health service and public health of the country, while actually slowing the development of a herd immunity.  Yes, a vaccine can also get us there, but these also can carry risk, which for the young and healthy may well out-weight the perceived benefits.

One of the big problems with this p(l)andemic is the extent to which it has become politicised. This in turn has infected the statistics, where death with COVID is usually reported rather than death by COVID, which with the sometimes overly sensitive PCR tests and potential for false positives that perhaps have been exaggerating both the reported case increases as well as deaths; albeit with the latter significantly lagging.  There have also been instances where other respiratory diseases such as Flu and Pneumonia may have also been co-mingled with the COVID totals, which would obviously then overstate the impact of this supposed ‘second wave, coinciding as it has with the normal seasonal increase in respiratory diseases.  But of course, if the political agenda is to soften up the sheep for the vaccine, more government control of personal liberties and the economy, then this would be consistent with those aims!

In our previous blogs we have also highlighted the problems in accurately identifying COVID infections (particularly given the high incidence of asymptomatic or mild cases), together with the significant variation in Infection Mortality Rates (IFR) by age group and between those with and without co-morbidities. Another way of course, is just to look at the extent of excess deaths relative to previous years. As mentioned above, in the UK, the earlier spike provided an clear divergence against trend, but this is less obvious this time round. Given the concerted attempts to promote the vaccine rather than therapeutics, this suggests either we are already seeing an element of herd immunity (eg T-Cells etc), better isolation perhaps of the vulnerable and perhaps also there being less of them after the previous wave. With only a couple of weeks to the year end and average deaths in England and Wales are approx 1,400 per week (or +13%) above the trailing four year average of almost 11k per week. To put this into perspective against a rising population, this represents an increase in the annualised mortality of +10.9bps from 0.968% to 1.078% pa. Not great if it’s you, but not statistically significant given the possible contributing factors to the increase might include the adverse effects of the COVID focus and lockdowns, which may also have even greater longer term negative effects on overall mortalities. Hardly the stuff of 541 or 1346! 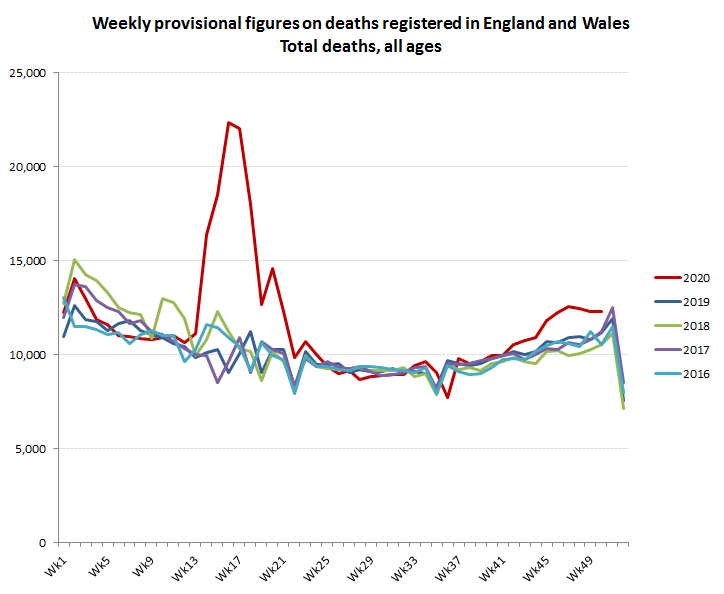 But what about the ‘youngsters’, or at least those representing the core productive elements of society, who are currently being constrained by government policy? The below chart from official ONS data for weekly mortality in England & Wales for all age groups under 45 years of age ought to say it all. Apart from a very minor spike across just three weeks from mid April to early May (Weeks 16-18/17 Apr-01 May), the average weekly mortality has been no higher than in preceding years and indeed actually a fair bit lower during the early summer months. Perhaps instead of failing lockdowns, governments ought to have been encouraging us to get out into the sun (vitamin D) and get some exercise and get fitter! 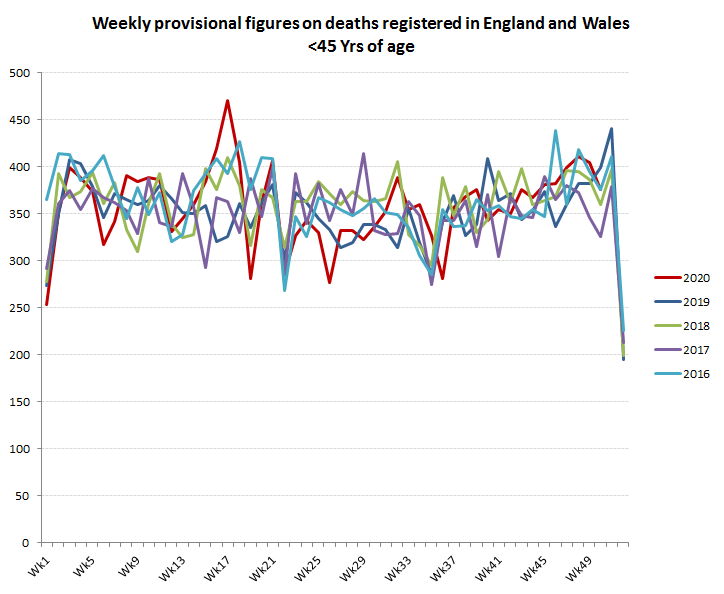 And these are official ONS figures to Wk50 (11 Dec)

Although a little too close with the CCP and big Pharma and without a data set cleaned up for many of the above nuances, the WHO data can provide an additional layer of insight into this virus, including reported case infections and associated deaths, albeit with our caveats on the reliability and cross comparability of this data 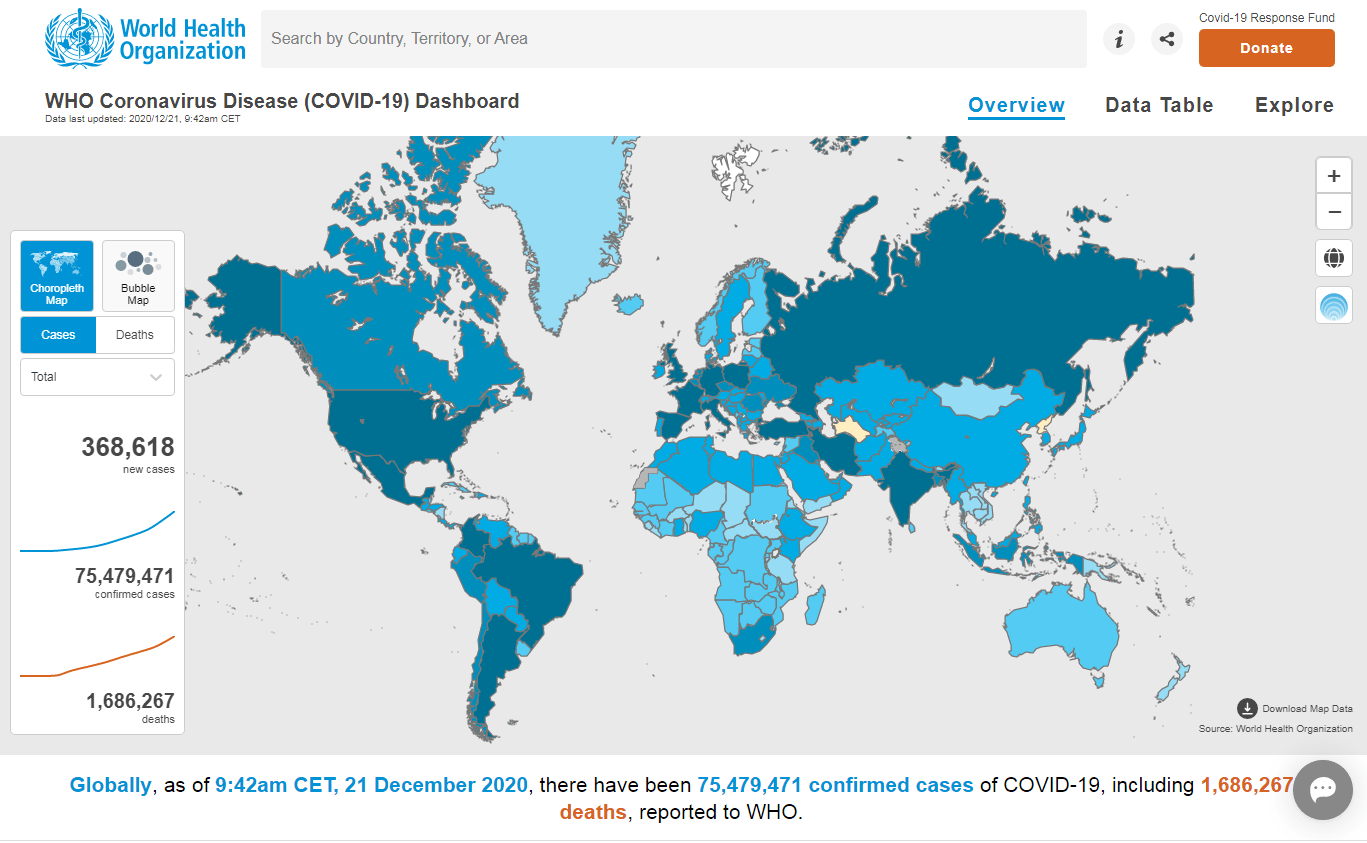 One country worth a look at is Belarus, where President Lukashenko has eschewed lockdowns in favour of vodka (albeit he himself is teetotal). The rise in reported cases is broadly consistent with the increase in testing and testing sensitivity, although associated deaths from Covid are only modestly ahead of an already very low average rate. With a cumulative total Covid deaths of only 1,333 to date, this represents an IFR of under 0.8%, but only  0.014% of Belarus’s population of 9.4m. That is only one-eighth (12.5%) of the comparable rate of 0.113% from the UK’s 67,075 to date reported Covid deaths. By way of comparison, a similar rate for the UK would have seen the Covid deaths down to only around  8,400; a reduction of over 58,000 which would have kept the overall mortality rate at or below the trailing 4 year average. And all this without lockdowns and face-nappies! 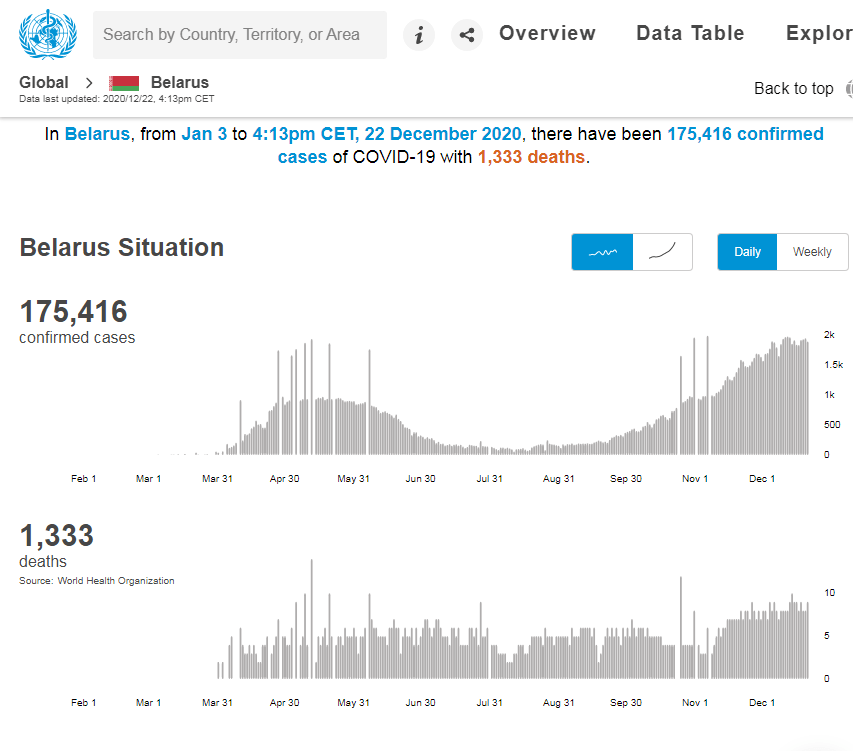 The power of Vodka!