Facebook Q3 results: Shaking out the momentum traders, albeit still a little early for the deep value guys 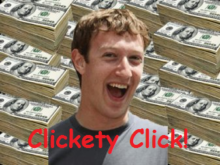 It has a great model and enormous growth potential, but you’ll have to excuse my cynicism at the way revenues, margins and expectations were pumped up this year.

Having pushed higher yielding newsfeed-only advertising on mobile and saturated advertising loadings, we’ve had the inevitable surge in revenues, margins, share prices etc, but now its payback. Many advertisers I know had been less than happy about the resulting drop-off in conversions, so I’m not too surprised to see some push-back, with the group again having to tell markets to drop their top line growth expectations into next year as well as gird themselves for an as yet unquantified increase in investment costs.

Advertisers may have their gripes, but they’ll be back. FB is just too big to ignore and after chucking some serious investment behind Instagram, WhatsApp and a host of other development areas such as Marketplace, the group has a lot further to go in terms of increasing its advertiser penetration. As such I regard it as a deep value proposition that will become more attractive as momentum investors are shaken out and reminded of the share split and restructuring earlier in the year.  Apart from enabling the controlling shareholder to divest equity into the rally, but without ceding any voting control, it should also remind markets that his focus will 5-10 years out rather than the quarterly comfort of traders.  From this perspective, near term market expectation may still be too high and therefore scope still exists to see the shares back further.

From the GrowthRater Analytic section: 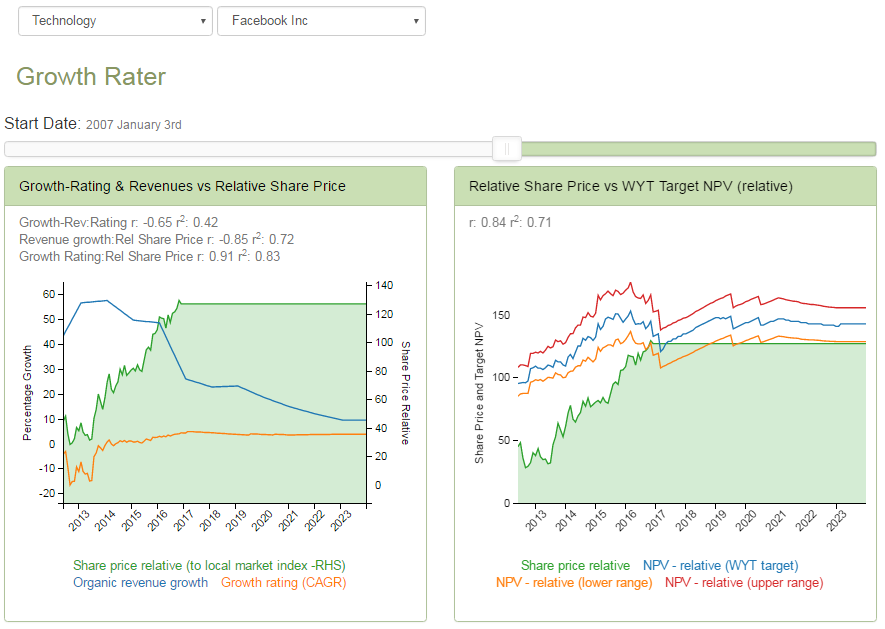 Facebook: For those that didn’t get the message at the previous quarter’s results, the group has reiterated its guidance for a slowing rate of revenue growth into next year, as advertising loadings near saturation, while also warning that costs will be moving the other way in what is now described will be “an aggressive investment year”. For now, the group has yet to provide the quantum on either revenue or OpEx which means there may be a healthy divergence in forecasts for FY17 as well as a possible reluctance by momentum investors to chase the longer term growth story until clarified. With Instagram, WhatsApp and several more projects such as Marketplace to develop, there is no shortage of potential to feed that growth story, albeit with an accompanying short term sacrifice to earnings. For deep value investors this will tick many of the right boxes; market leading and extendable brands in growing segments where capital can be applied and a controlling shareholder who is protected from short term restraints. For our GrowthRater valuation model, this confidence in a group’s longer term growth potential is also paramount in that super-normal organic revenue growth pushes out the horizon point on our mean reversion algorithm. With core usage still growing by +17%, an under-penetrated advertiser based to be exploited and then as the new investment areas come on stream we could still be looking at organic revenue growth running at +20-30% pa out to the end of the decade. If so, then we would expect a mean reversion on the GrowthRating to be pushed into 2020 to support a target NPV range of approx $120-150 ps.

Outlook: FY16 guidance, where provided is broadly unchanged on the one provided at the prior quarter, except for a further -5ppts reduction in the OpEx growth guidance ranges. Q4 revenue growth is expected to slow as the group cycles against high prior year comparatives (of +67.5%), a further drop in fees and a slowing rate of growth in Adv loading.

For FY17: No formal guidance is provided at the stage beyond an expectation that the increase in Ad loading that has been underpinning the surge in FY16 advertising revenues is estimated to only “grow modestly over the next 12 months” and will be a “less significant factor driving revenue growth after mid 2017”. Future areas for growth that will be developed will include WhatsApp and Instagram, although initially, this will come at an OpEx cost penalty. With advertising growth expected to slow “meaningfully” and FY17 representing an “aggressive investment year” (NB Q3 FTE’s +>30%), the group is again signalling a slowing outlook in earnings, albeit until the new development areas (such as Instagram and video) start to kick in.