All very interesting you might say, but isn’t this a ‘media’ blog?
Indeed it is, but just asÂ any great sauce needs to be based on a good stock (yes I spent the best part of a decade at a leading French bank), so a meaningful media valuation needs to be rooted in a coherent and consistent valuation for the market against which one canÂ assess the relative risk and return.

But where to start?Â  Well, why not go from the sublime to the ridiculous and choose a stock from the valuation extremes; at least from the perspective of traditional earnings based criteria – Yell.

“Broker cuts its target price for Yell by 38%!” While perhaps a little belated given that the shares at 7p are already below the revised target of 8p, the event is of interest in that it highlights the absurd attempts at valuation accuracy. On an earnings basis, the shares may have seemed cheap when they halved from 10x earnings to 5x, then to 4x, to 3x and now to 2x. Since all these metrics are broadly meaningless, none have so far provided the fundamental support level than manyÂ bulls have hoped. 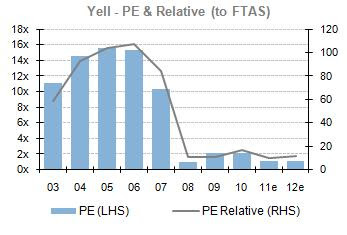 As I have already argued from my earlier blogs, that beyond the tax shield, the cake doesn’t get bigger when you cut it into more slices. Valuing an equity from post interest earnings irrespective of its capital structure can provide the illusion of value accretion from enhancing earnings, but in the real world markets continue to value to overallÂ value of the operations, less the NPV of liabilities.Â Think of the operations as the proverbial iceberg, with the volume above the water representing the market value of theÂ equity and the submerged portion representing the NPV of the liabilities.Â For Yell, this relationship is somewhat extreme, in that the equity component represents a mere 6% of the overall value of the business. For an analyst to confidently cut 38% off their value of the equity may sound punchy, but this represents a mere 2% cut in overall valuation which is certainly a lot less than the margin of error I would factor in to my valuation an a multitude of issues such as market ECC, the companies structural growth prospects, margins etc.

Yell’s MV represents < 6% of EV, which is way less than myÂ margin of error 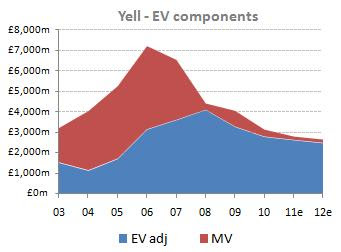 Notwithstanding the extremes of the Yell financial leverage, a valuation analysis on an EV and operational FCF yield basis starts to make a lot more sense when translated into a growth rating. Here we can see a growth rating that was raised from around +2% CAGR at the time of floatation to over +4% as expansion into the US lulled a market into believing that this mature segment might still have some legs left in it. Once online migration and recession hit however and organic revenues turned negative, the perceived growth rating evaporated along with it.
Growth rating – systematic relationship to organic revenue delivery 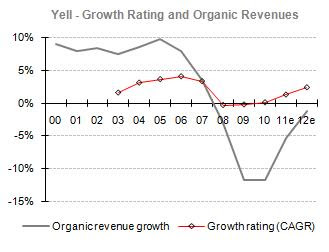 Facing a structural decline in classified revenues and possibly also margins against an equity component that is less than 6% above the NPV of liabilities, Yell’s equity probably owes more to expectations of the market’s overall ECC than any real confidence one can have with regards its own specific medium term forecasts. On my own forecasts and applying a 0-2% CAGR growth rating ranges I would get an equity range anywhere between -19p ps and +16p. This however assumes they can deliver on my reducing rates of revenue decline (to -5% for Cal 2011 and to 0% by 2013), notwithstanding their continued revenue shortfalls against budgets. Applying a more realistic margin of error to my central case revenue targets of +2.5%/-5% pa, would widen this valuation range to anywhere between -60p ps and +26p ps. Is it any surprise that markets treat these shares as little more than momentum plays on short term revenue trajectory or an option on changes in market ECC? 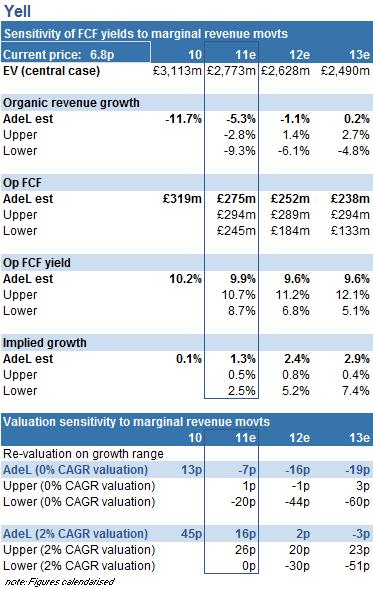