Groupon in need of a Groupon

Good to see that markets have aÂ handle on valuing the current batch of internet IPO’s. Having initially more than doubled from its listing price, Linkedin’sÂ subsequent -35% share price retrenchment means that it is now only 47% ahead on its original offer price last month. Pandora meanwhile also seemed be getting off to a good start with an initial rise of +25%, although the subsequent -50% fall meant that it ended its big day down -35%. But then Pandora is not ‘Social Media’ and we’ve all heard that social media is hot, or at least as long as one isn’t trying to sell off MySpace! So what about Groupon, that almost social media group buying network, but with explosive growth that is limbering up for its own IPO?

As with all these embryonic dotcoms, one is being asked to buy into a longer term story that has yet to be fully formulated and where even current data on key metrics, such as merchant retention and customer churn, are not available.Â Â Groupon’s currentÂ performanceÂ provides evidenceÂ that, so far at least, the model works as an effectiveÂ promotional tool for local merchantsÂ as well as Groupon’sÂ  ability to negotiate a sizable share (50%) of the discount (>50%)Â offered to customers that it is able to reach. The merchant howeverÂ retains less than 25% of the full ticket price of the service under the offer,Â which means that unless it carried an original gross margin of over 75%, theÂ viability ofÂ a Groupon asÂ a sustainable marketing tool willÂ hinge onÂ whether itÂ builds repeat customers at full price.Â  A deeply discounted Groupon clearly builds sampling, but the evidence on customer loyalty and merchant retention is more patchy.Â  For the present, this does not appear to have adversely impacted Groupon’s ability to sign up merchants or to squeeze gross margins or average customer spend as the competitiveÂ challenge hasÂ emanated mainly from hundreds of daily-deal Groupon clones such as LivingSocial.Â  The entryÂ of tech and data rich internet networks such as Google,Â FacebookÂ and Microsoft into this space however, could start to change these dynamics as they leverage their social media and user data to offerÂ relevancy andÂ loyalty tools to merchants.Â As theÂ competition broadens the value proposition into these areas, will this commoditise those daily-deals sites stranded with a relatively narrow value propositionÂ of offeringÂ a discount to an email distribution list? If you think so, then the trajectory for prospective gross margins and customer value may struggle to justify theÂ pre-listing spin ofÂ an IPO valuation perhaps topping $20bn.

Quick & Dirty valuation
In its S-1 pre-listing teaser Groupon omitted to include some important metrics on areas such as customer churn and merchant retention which would have provided a better steer on customer life time value (CLTV), customer acquisition costs and therefore the basis for a per customer valuation. A metric which Groupon is choosing to highlight however is something referred to as ‘CSOI’ (consolidated segment operating income), which excludes marketing and stock compensation charges. While stock compensation should be regarded as a real expensable cost, a pre marketing EBITA can be used to provide some sort valuation perspective; albeit one still needs to make a stab at a normalised marketing spend per subscriber and a churn assumption to estimate the period over which this ought to be amortised. For Q1 FY11, reported CSOI excluding stock comp was $63m or an annualised $16 per customer. Adjusting for the step up infrastructure spend in SG&A in Q1 and some prospective scale benefits, this might suggest adjusted CSOI of perhaps $20-25 per customer pa. At $208m, Q1 marketing costs represented an annualised charge of over $50 per customer, although assuming a 20-30% reduction for future scale efficiencies and an abnormally heavy weighting in Q1 from Groupon’s race for leadership, might see this ease back to nearer $35-40 per customer. To breakeven on a per customer basis therefore would need to this figure to be amortised over 1.5-2.0 years and require an underlying customer churn rate of under 35%, if not under 30%. Even spreading customer acquisition expenditure over 5 years (and an approx 12% churn rate) would suggest an underlying EBITA per customer of $12-18. Apply a 5% FCF yield to the upper end of this range (and 14x EBITA assuming a 30% normalised tax rate and 100% cash conversion) and this could suggest a value per customer topping out at around $250. On this basis, markets may need to be looking for 80m customers by year 3 and a quarterly net addition rate over over 5m per quarter to underpin a current EV of over $15bn.

To reach a current market valuation of even $15bn for Groupon may require some aggressive, if not heroicÂ assumptions will need to be made, including an act of faith on future underlying churn. Apply a 3 year valuation horizon andÂ the group will need to be worth at least $20bn at the period end for it to justify $15bn today. Even if Groupon were to add another 20m customers over this period (from 16m currently to 36m) this would require an EV per customer at the period end of over $550. On an operational FCF yield range of 5%-7%Â (vs >12% for Google and 7% for the market for 2014e) I estimate that the underlying EBITA per customer would need to rise to $36-51 pa on this customer base (and after assuming a 30% normalisedÂ 30% tax rate and 100% cash conversion).

EBITA per customer needed to support Yr 3 EV of $20bn

While no pretense at sophistication is being made in the above ‘quick & dirty’ calculations, they should help to provide a rough framework of some of the issues and assumptions that will need to be considered in formulating a valuation.Â  With Groupon still in ‘land grab’ mode, attention is understandably focused on the stellar growth being achieved in customers and revenues rather than the low barriers to entry and what may also prove to be modest scale advantages. With underlying growth already maturing in some of the earlier penetrated regions, growth is being increasingly based on the geographical extension of the brand, all of which require their own layer ofÂ  investment in areas such as sales to support them which might imply a higher level of variable costs and therefore lower rate of operational leverage in the business model than may be assumed in the IPO brouhaha. Using my earlier $15 per customer underlying EBITA estimate ($12-18 range) and 14x EBITA multiple (and 5% FCF yield) onÂ a 36mÂ customer base by 2014, this would suggest an EV of approx $7.5bn or an NPV of nearer $6bn. Not a million miles from Google’s offer back in December which was rejected!

Land grab metrics
From a standing start toÂ $2.5bn pa of revenues, 16m customers and a footprint across 500 markets in just 30 months is certainly impressive. In this dash for growth and first mover advantage however,Â it is easy to miss that the group has been increasingly reliant on the geographical extension of its model to drive this growth. In the process, the average conversion of ‘subscribers’ [those on the email distribution list agreeing to receive offers, rather than actual paying subscribers] to customers is in decline (42% in Q1 FY11 vs 45% in Q1 FY10). As Groupon only releases cumulative customer numbers rather than the more relevantÂ active customers, this conversion ratio is therefore already flattered.Â  Revenue and more importantly gross margin per customer meanwhile are all broadly flat as are average Groupon and merchant margins.

Unit yield from legacy markets eroding
The original and early roll out regions however are beginning to mature. Absolute growth rates in subscribers, customers and Groupons are still being achieved, but the underlying yields on these are deteriorating. As the customer and merchant base ages, Groupon’s yield is eroding. What is less clear is whether this is a natural maturing of the market as new entrants (both customers and merchants) dilute higher spending early adopters or a deterioration in the perceived value proposition by existing customers and merchants after using the service.

For more on the Boston –
//blog.yipit.com/2011/06/03/groupon-s-1-reveals-business-model-deteriorating-in-oldest-markets/

Costs
Groupon is currently inÂ a land-grab mode, while a valuation will try and anticipate what the Â underlying costs will be in a more steady state environment.Â The rate of top-line growth has been phenomenal, but this has been more than matched by costs andÂ without a clear perspective on churn, prospective investors may struggle to determine whetherÂ this has been acquired profitably from the GAAP numbers. Fully expensingÂ SAC costs presents a fairly alarming increase inÂ marketing costs per customer (from $12 in 2009Â to $53 for Q1 FY11, annualised) and the rise in SG&A costs per customer also suggest a sizable step-up in fixed infrastructure spend to support the aggressive geographical expansion.Â Â Â In total, GAAP operating costs per customer have trebled from $32 pa toÂ $98 pa.

The challenge on modelling Groupon costs is twofold. What is the variable component to costs and over what period should these be recognised? In the below analysis I’ve guesstimated that variable costs have edged back from 67% to 63% of costs as some (25%) of the recent increase in marketing costs will have reflected a step-up in infrastructure costs from the extending the regional footprint. On the basis of the last reported results (Q1 FY11), amortising these variable costs over say 2 years (approx 30% customer churn) would therefore suggest an annualised variable costs at approx $31 per customer. Include fixed cost at around $36 and the total annual underlying costs would come in at approx $67 per customer vs the GAAP rate of $98. 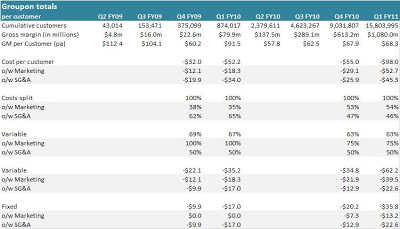 Modelling gross margin and costs per customer by churnÂ 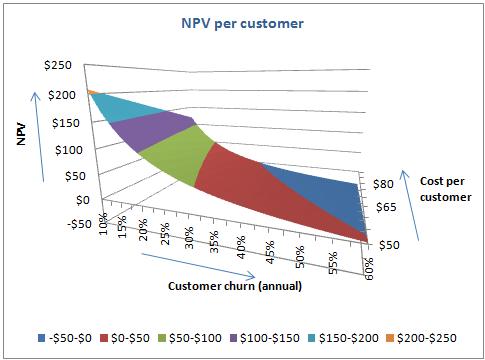 NPV per customer
Applying a $70 perÂ customer average cost (with a 63% variable component)Â and a 25% customer churn (2.5 Yrs av. life) should deliver an average FCF of approx $13 per customer pa (post tax at 30%). Assuming that the market reaches out beyond the current growth build out to a more steady state environment (in 2014), I estimate that the business could trade within a 5% to 7% operating FCF range (discountingÂ CAGR of +7.5% and +5.5% respectively) and a per customer valuation of $191-$267.

Value per customer by churn and FCF yield

Revenue per subscriber:New regions clearly generate considerably less than the the legacy US ones of Chicago & Boston, although the gap is closing as these latter two erode. 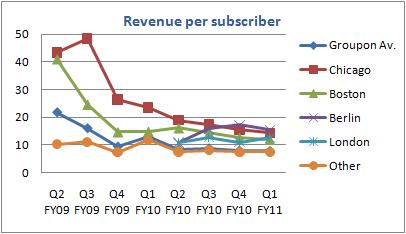 Subscriber to customer conversion:New regions have brought down the average, although this metric is distorted by Groupon only reporting on cumulative, rather than active customer numbers which inevitably flatter the customer numbers for the longer established regions. 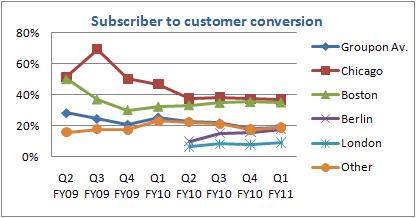 Revenue per customer:declines across all reported segments although again thisÂ will be in part diluted byÂ reporting only cumulative customers rather than active ones 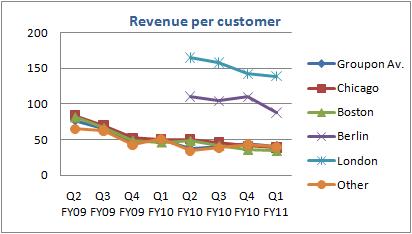 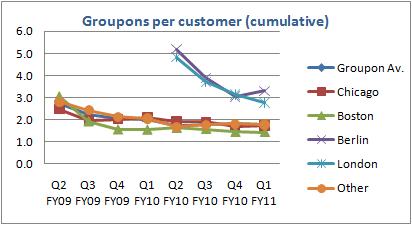 Revenue per Groupon :Apart from London and briefly Berlin, there is little variance by region; at least those disclosed. Trend however still downward, particularly for Boston & Chicago 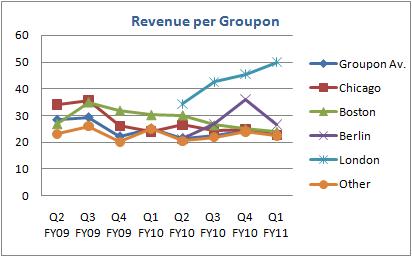 Revenue per merchant:Relatively stable overall, but with considerable volatility by region and steep declines recently in Boston & Chicago 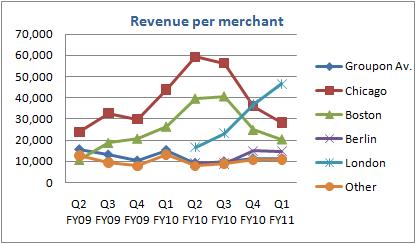