The City narrative on the Q1 results seems predictable enough; a positive underlying revenue momentum whichÂ is encouraging managements to raise full year trading expectationsÂ andÂ return to acquisition led expansion – a big hurrah for the bankers! Equity markets however are proving a tougher nutÂ to convince, given its broader macro focus andÂ as a consequence consensusÂ forecasts for revenues and earnings areÂ showing littleÂ  change over the past month;Â barringÂ some rattled Dentsu estimates of course. Offered the choice of listening to bullish management or an increasingly challenged economic recovery, markets know where to place their bets and agency share prices have tended to under-perform accordingly.Â  While many may wish to celebrate thatÂ Mo Greene moment in Pakistan, the domestic outlookÂ remains constrained by rising inflation against falling discretionary income andÂ the prospective end of the QE party.

AgencyÂ revenue recovery – so far so good
Rate of revenue recovery into 2011 is easing, albeit by less than the reduction in the comparative tailwind might have suggested. For Q1, average organic revenue growth of around +6.6% YoY was -2.9pts below the +9.5% posted for Q4 2010, notwithstanding a +7.2pts tightening in the prior year quarterly comparative from -6.4% to +0.8%. For Q2 meanwhile, agencies are pointing to rates of YoY organic revenue growth that are not vastly dissimilar to those achieved for Q1, which given the further tightening in prior year comparatives (by 4.9pts) has encouraged management to harden full year growth expectations and more importantly to ease restraints on acquisition spend.Â  Two points of note however is firstly the continued high rate of growth still being achieved from the US (averaging around +7%), notwithstanding deteriorating quarterly GDP andÂ outlook. Secondly, FMCG groups such as P&G and Unilever are maintaining A&P spend ratios, while shifting spend from price promotion to brand building advertising to defendÂ increased pricing (in an attempt to pass onÂ commodityÂ inflation equivalent toÂ -500bps of margins).Â  In the short term this has beenÂ positive for agency revenues, although whether this is sustainable may depend on the extent to which this additional brand investment really does convert into pricing power. 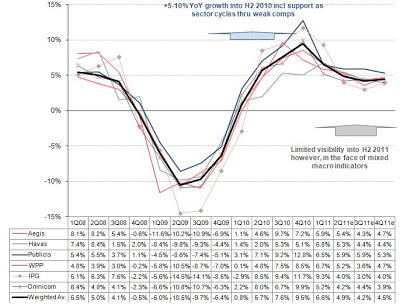 Pricing power or post trough bounce?
The issue of pricing power in an inflationary (and possibly stagflationary) environment goes to the heart of of the agency value debate. FMCG clients are shifting spend into branding to support price increases and this is being reflected in agency revenues. Does this mean that we are now entering a new period of above market growth for agencies? I wouldn’t bet on it. Marketers may be currently upping their brand spend, but they are also focusing on raising their marketing ROI, including raising the digital mix. Over the past decade this process has dismantled the distribution bottlenecks of many legacy media with the consequential squeeze on advertising yields. If this has resulted in global adverting expenditure growth falling short of GDP, then this has still exceeded agency organic revenues. Hopes that the current growth in marketing investment and agency revenues represents a paradigm shift therefore seems to be wide of the mark. Structurally, legacy media continues to be disintermediated and agency gross margins remain under pressure. Where gains are made in either organic revenue growth or EBITA margins, this often has as much to do withÂ agencies heavy reliance on acquisition to buy newÂ marketing skills and to shed overlapping costs rather than any fundamental evolution in the agency model. If agencies have been spending over two-thirds of their cash flow to acquire skills, one presumes, in faster growth segments, but still deliver organic revenue growth averaging over -100bps pa less than GDP, then what does this really say above their underlying pricing power. While the riposte may be that much of this performance shortfall is recouped by an average +50bps pa ofÂ EBITA margin gain, this conveniently ignores any expensing of acquired intangibles which are consumed. Consider the numbers. Even if these intangibles are consumed and amortised over 20 years, this 5% expense on the two-thirds of FCF spent on acquisitions would therefore equate to -3.3% pa of overall FCF, which is just happens to fully absorb the positive benefits of a +50bps pa EBITA margin increase on a 15% margin base. Using the current recovery in expenditure and revenues to justify a resumption of the acquisition led growth model for agencies therefore represents a somewhat bitter-sweet dilemma for the markets, which probably helps explain the muted response to all the positive trading spin we’ve been getting. 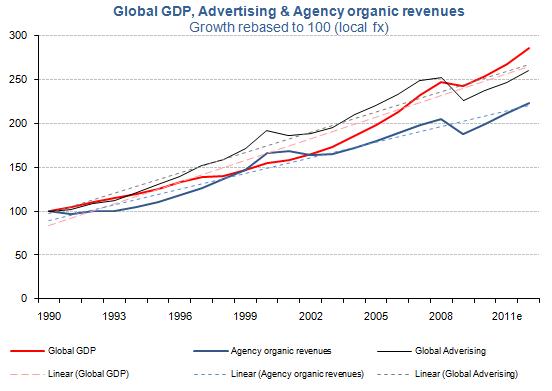