Publicis Q1 – positive revenue momentum, but is this the real story?

The narrative the markets will focus on will remain theÂ group’sÂ ability to translate itsÂ digital and emerging marketÂ investments into premium revenue growth and further margin progress. From this perspective, Publicis’s Q1 revenue performance should be well received. A +6.5% rise in organic revenues pipped Omnicom’s +5.2%, reflecting continued progress in digital (+12.6% to 28.2% of revenues) and emerging markets (23.4% of revenues; +1.4pts YoY u/l), while the +58% rise inÂ net new business (to $1.9bn) suggests the service proposition continues to resonate with clientsÂ to underpin further relative outperformance. Average net debt meanwhile is down by â‚¬500m YoYÂ to only -â‚¬100m and the group is sitting on â‚¬3.9bn of liquidity, including â‚¬2.7bn of committed facilities and â‚¬1.7bn of cash and marketable securities.

Markets may focus on the top-line delivery, but the real story should be onÂ what happens to this liquidity.Â Historically, agencies have applied cashflow to buy newÂ marketing skills to extend their service proposition to clients. This is a great way to build your business and it can also be earnings beneficial as internal investment (thru the P&L) isÂ displaced by acquisition expenditure onÂ intangibles, that loiter in the balance sheet and are broadly ignored in earnings assessments. Markets are not dumb however and recognise that some, or all, of these acquired intangibles are being consumed andÂ discount equity valuations accordingly.

Q1 Revenues
Organic revenue growth of +6.5% vs Q4’s +12.8% rate of growth slowed as expected from Q4 spectacular levels (+12.4%), albeit by slightly less than the tightening comparatives might have suggested (Q1 comps at +3.1% were 8pts less favourable than Q4’s -5.1%). By region, growth was again driven by

Valuation – Q1 Revenues
As with other agencies I would expect Publicis’s valuation range will continue to be defined by its revenue outlook, which for the moment remains positive. Historically, Publicis has tended to trade at a small discount (on a growth rating basis) to larger agencies, such as WPP and Omnicom, although its current revenue and net business performance may challenge this. At current levels I estimate the shares are discounting trend growth at around 3.5-4.0% pa for 2011 and 2012, possibly dropping to approx +2.5% by 2013. This values the equity at nearer the lower end of what I would regard as a comfortable trading range of +3.5-4.5% and with scope to see this edge up the nearer +5% should the group demonstrate restraint on blowing its balance sheet on an aggressive acquisition spree. 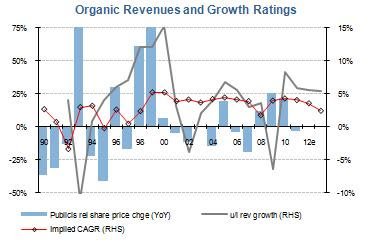 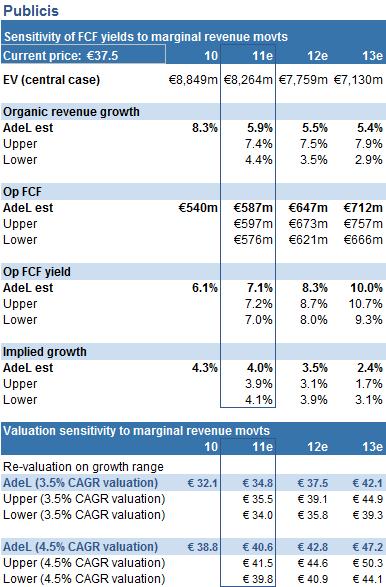 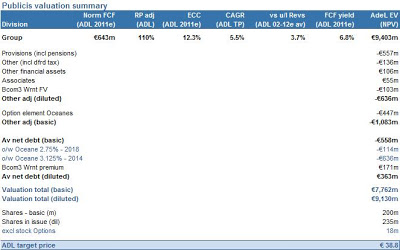 Has anyone noticed that many agencies are currently priced at little more than they have invested in acquisitions over the past decade? For an industry model based on applying cashflow into acquisitions rather than returning to shareholders, this might seem a little embarrassing. When most agencies are also delivering sub-GDP organic revenue growth, despite heavy investments into ‘new’ growth areas, this might pose a challenge to the whole growth model on which agencies have been based. For Publicis, I estimate that over â‚¬9bn has been spent onÂ acquisitions since 1999 (net of disposals and at constantÂ 2010 prices), which is only 13% less the current EV of the group.

Acquisitions – earnings accretive, but value destructive?
Equity markets may focus on earnings before amortising these acquired intangibles, but even on this metric, most agencies have also struggled to demonstrate that they have covered their equity cost of capital. While acquisition contributions cannot be disaggregated from the core businesses, one can look at the extent to which real EBITA has risen over the period and then take this against cumulative acquisition expenditure to calculate an impliedÂ acquisition ROIC. In the below analysis, I have calculated this on two EBITAÂ growth assumptions of zero and Â +2% pa at constant prices. On both these criteria, the implied ROIC seems to fall below 8%. While above debt financing costs (and therefore probably EPS accretive on the potion financed with cash), this is below ECC and therefore represents a loss of opportunity value, if nothing else.