Delivering Q1 EPS of $0.69 vs a consensus expectation of $0.59 ($0.56-$0.63 ranged vs $0.52 for Q1 FY10) seemed like a fairly convincing beat, although the market had not been expecting the $123.4m of book gain from the remeasurement of the fair value of its interests in Clemenger Group, nor the scale of offsetting restructuring charges (of $131.3m, including $92.8m of severance) and nor the accompanying tax benefit which cut 9ppts from the YoY and underlying tax rate (from 34% to 25%). In aggregate these items contributed $19.8m to Q1 net income ($0.07 per share), including -$91.8m/$0.317 ps of restructuring which was clawed back by $120.6m/$0.417 psÂ of FV adjustments and a -$9.0m/$0.03 psÂ FIN48 tax accrual.
Without a comparative figure for severance and other restructuring charges that were includedÂ in Q1 FY10 it is difficult to draw too many conclusions from the +43bps YoY advance in EBITA margins (to 10.9%). Representing a drop thru rate of under 9% from the Q1 organic revenue growth of +5.2% (vs my +5.1% forecast), this does not seem all that impressive given that Q1 FY10 will have no doubt have included severance charges and while the refilling of bonus pools will have continued to have provided a margin drag into 2011, there should have also have been some compensating cost benefits carrying over fromÂ last years cost reductions.
Omnicom EBITA margins & organic revenue growth

Revenues growthÂ continues to define valuation
With net business wins of almost $1.1bn in Q1 ($950m for Q1 FY10) the group remains confident that revenues have now returned to growthÂ in both US (+4.9% and +6.8% excl Chrysler) as well as Internationally (+5.5%, incl >+9% in UK). Prior year comparative however will be progressively hardening throughout the remainder of the year (and by almost 4pts in Q2 vs Q1) and macro uncertaintiesÂ and moderating GDP expectations (including potential disruptionsÂ still to flow thru from Japan) might be expected to provide additional headwinds.Â For the moment at least, I would expect a neutral to negative forecasting risk to near term consenus revenue growth forecasts.
Omnicom – Organic revenues and growth rating

While these macro uncertainties persist, consensus revenue and earnings momentum for OMC may well stall for the time being. The shares meanwhile (on these consensus forecasts) appear to have already substantially re-rated to reflect the revenue recovery to date and are discounting growth near the upper end of their historic +3-5% CAGR range. Assuming that we are not facing a double-dip, I would scope a +4-5% CAGR growth rating range for this groupÂ and therefore a $40-47 ps price range. 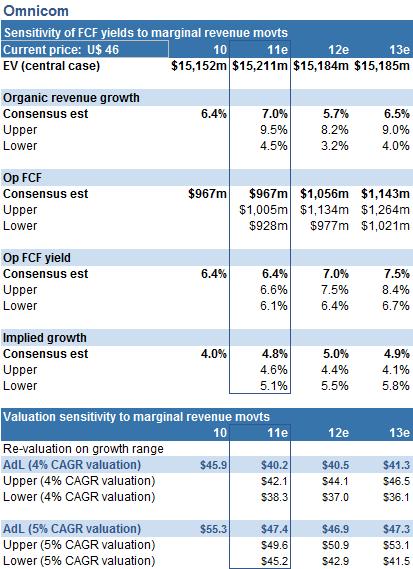