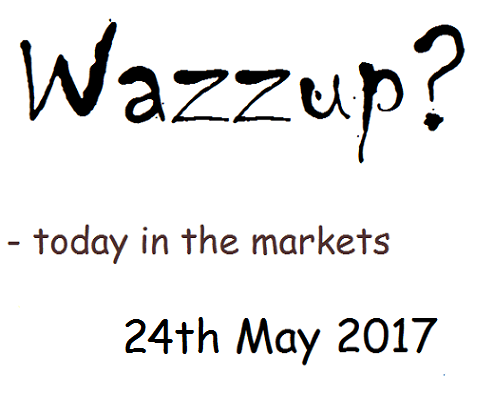 Marks & Spencer Plc – FY17 results:  –  fortunately markets liked the results (+1.5% to 393.4p close), although beyond the 6% OpFCF yield and big dividend there wasn’t much to get too excited about. Having tucked away over £600m in ‘exceptional’ charges over the last couple of years on everything from ‘onerous leases’ to ‘pension & pay’, one might have hoped this would have provided more of a tailwind on costs for the current year than suggested by the guidance,  in case some of the top line assumptions get derailed by the forthcoming Brexit negotiations, or perhaps lack of them. For now I’m a stale holder of the stock (+24% since adding to the portfolio at the end of last June, but only +4% relative), but once it goes xd the 11.9p final dividend it feels like dead money over the next quarter – probably one to write some calls on to generate some additional income.

The FY17 results themselves, where broadly on track once one has adjusted for the impact on the late Easter and one less week with FY17 back to 52 weeks. That however still included a deterioration in underlying lfl sales into Q4 for both Food (from Q3’s +0.6% to an adjusted -0.2% in Q4) and Clothes & Home (from Q3’s +2.3% to -1.7% in Q4), which was only recouped by increasing space capacity at Food to hold underlying organic revenue growth for the group in Q4 to +2.1% and for FY17 to +1.1%.  This was notwithstanding Q4 Food sales being driven by price inflation and C&H profits being supported by lower price discounting (and higher gross margins) and marketing investment.

For FY18 however, the group’s strategy is to accelerate the expansion in space at Food, although the accompanying additional costs will means profitability will be increasingly exposed to their ability to hold the price rises and gross margins that sustained Q4. With M&S already cautioning on the’highly competitive market’ this assumption may prove ambitious and along with it FY18 group forecasts.  Working through the group’s own guidance ranges for gross margins, space expansion, there’s not a lot of slack built into the model if they’re stuck with a UK operating cost inflation of between +2-3%.  I include a summary of the model below.

Kraft Heinz deferred tax liabilities – nerdy issue, but it could cost you