WPP :Â Â  The group is tightening the screw on hiring and staff costs to absorb slowing net sales growth while maintaining the public forecasts of rising GDP and advertising expenditure into 2015. The hitherto growth engine markets of BRIC however, are looking increasingly wobbly, while the contraction in margins at the digitally heavy specialist communications division suggests pressure from rising talent costs. For the present, markets are un-fazed as long as Draghi follows through with the QE rumours and groups such as WPP increasingly resort to share buy-backs and lower tax provisions to create the veneer of value enhancement for investors. While the current financial repression engineered by central banksters can make most share buy-ins look attractive by enhancing EPS, this is just another example of the misallocation of capital when companies are being encouraged to overpay for growth, even when it is their own.

Costs: Against constant currency revenue growth of +6.4%, constant current currency cost growth was held at +6.2%, ergo, the +30bps constant currency margin uplift reported. Within this number staff costs as a proportion of net revenues edged up from 66.5% to 66.6%, notwithstanding cuts in cash incentives (from Â£78m to Â£54m) and modest increase in like for like FTE numbers; +1.7% YoY to period end and +1.5% average for H1.

OUTLOOK FY14: Group FY14 guidance remains at >+3% for lfl net sales and +30bps (at constant fx) for EBITA margins with the 45% dividend payout target being brought forward to the current year. On a macro perspective, WPP did not re-iterate its FY14 global GDP growth estimate of +3.6% (+5.7% nominal) although continues to forecast global advertising expenditure growth of +4.5% for 2014, rising to +5.0% in 2015. The latter, includes an improved level of expenditure across every major market with the exception of LatAm, where the drop-off in estimated the rate of growth to +8.7% vs +10.1% for 2014 is still relatively benign. Clearly, allâ€™s well in someoneâ€™s garden, albeit they ought to go easy on the weed!

In many ways, WPP is a microcosm of the broader market; a diminishing capacity to raise margins against a faltering top-line growth proposition and thereby having to resort to levering cheap capital to drive acquisitions and buy-backs in order to sustain the EPS growth mantra.Â  Perhaps, there are still some optimists out there that believe that “it’ll be better next year”, notwithstandingÂ  this has been pushed out each year, only to see the growth forecast crumble.Â  But who really cares?Â  As long as central banks flood financial markets with liquidity and depress returns, the game is not whether WPP et al are misallocating capital by over-paying for lower growth, but whether equities as an asset class remains attractive (by default) and if WPP shares remain an efficient proxy for this.Â  Of course, the madness won’t last, but until currency markets restore discipline, it seems to be the only game in town. 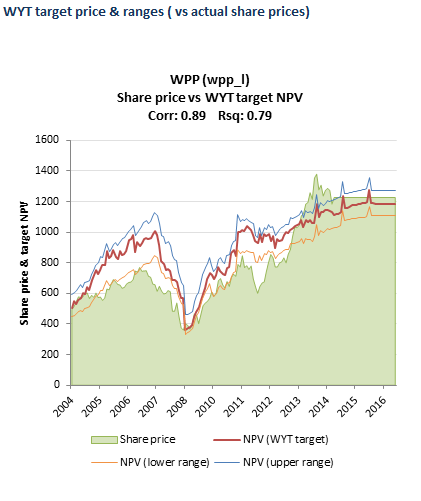