Having seen the outrageous premium Murdoch paid for the WSJ, markets must have been salivating over how much he might now stump up for Time Warner. Surely, the $86ps ($80bn) offer was a mere opening shot and that the old boy could be bounced into perhaps three figures, or so the narrative went. Not to be lads! The ‘old-boy’ has done a runner and left the spivs holding their longs in TWX and without another putative bidder in sight, the bid premium could evaporate.

Perhaps this a cunning ploy to lower expectations and soften up the TWX management ahead of a future return for TWX? If it is, it would be a remarkably long term strategy for an 83 year old. Instead, one should follow the money. Having arranged a $7.5/$8bn cash release from selling Fox’s European pay TV assets to BSkyB, initially to part fund the TWX offer, Murdoch is now proposing to spend the bulk of this ($6bn) on a share buy-back at Fox. If Murdoch was getting investor push-back on the prospective tidal wave of ‘A’ non-voting Fox shares that he would have to issue, even with the Sky cash, then a return for TWX, without the cash seems even less probable. As per my previous blogs on the subject, the Murdoch strategy is centered around retaining control while raising funds using cascading shareholdings and restricted voting shares.Â  Yes, he could always offer to issue voting shares, but is this really probable that he would risk his legacy to his children at this stage? No, he’d rather walk away. Perhaps an old fox can learn new tricks after all!
A reminder on TWX from the WYT Growth rater service: 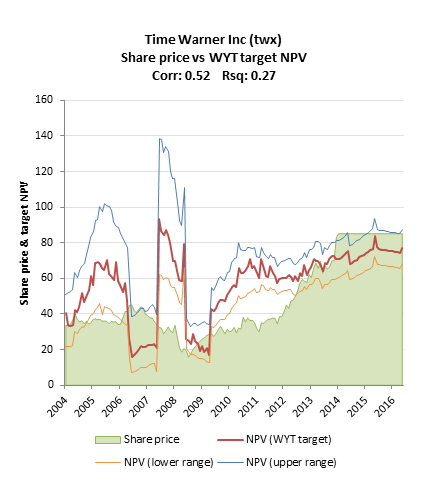