Fed flip-flops on tapering again – haven’t we been here before? 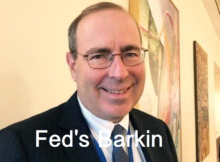 A solid monthly jobs report and the Fed rushes out some rumours that it may bring forward the supposed planned tapering. Yes, they’re that obvious!  From the subsequent -6% drop in the gold price, it would seem a few precious metal traders were happy to take the bait, although the lack of follow through from bond or currency markets suggests that’s where it ends. I did however enjoy the title in one report in Reuters which was

Unfortunately, the Fed is about as credible as the CDC, with each regularly flip-flopping their narratives according to the prevailing newsflow, or all too often due to the exposure of their previous porkies.  So forget the data, everything coming out of the Fed is to serve a political narrative and an insane fiscal expansion that will inevitably result in a spiral of currency debasement and ultimately higher interest rates and economic collapse. Every straw that might be spun to suggest a return to monetary probity is only there to keep investors in the dollar and the many new ones to follow.

The hit-job on the gold price however, also comes at an interesting time, both as one of the largest producers, South Africa descends into anarchy  and ahead of the 50 year anniversary of Nixon pulling the US dollar off the gold standard and onto an oil based system. A move that has both defined US foreign policy as it struggles to retain the reserve currency primacy of the US dollar, while removing the peg that ensured a more disciplined and honest monetary policy by the Fed. The anniversary meanwhile is another opportunity to take stock as to how successful monetary regulators and purported guardians of the currency have performed. While inflation can be manipulated, there are two assets that can provide useful metrics as to the extent of the currency debasement and both ought to be cause for concern. Residential property, as this is the essential and principal asset purchase for all aspiring Americans and of course gold itself. 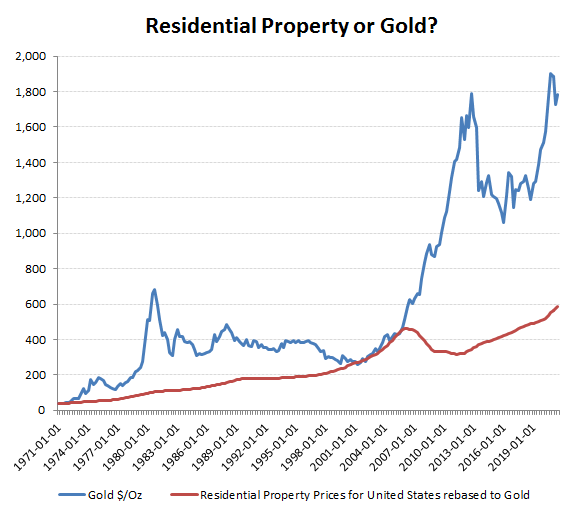 The flight to inflation hedges

For residential property, average prices have risen by over 14 times their August 1971 levels, while for gold the price appreciation is a massive 46 times. Looking at it another way, that means the US dollar versus gold, has depreciated by -97.8% and is worth only 2.2% of what it was worth 50 years ago before it left the gold standard. The same guardians of the dollar such as the Fed are now throwing markets a few crumbs, whilst still overseeing the most fraudulent expansion of funny money to fund what will possibly be remembered as the most corrupt and value destructive congressional spending programmes in the history of the republic. 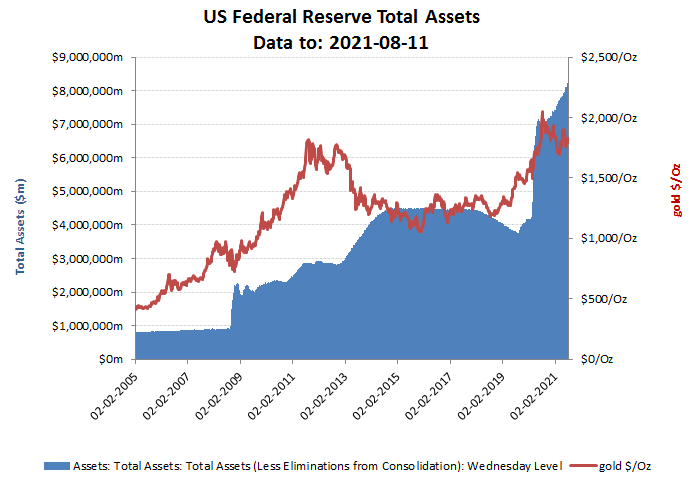 Debase the currency and see investors panic into gold

As to why gold has outperformed residential property, the answer must be self-evident from the money debasement that has been dressed up in important sounding acronyms such as MMT or QE and which for a while included the pretence that central bank asset expansion would ultimately be reversed along the same lines that it was built up, ie through the markets. Just as the 2008 ‘financial crisis’ was used as the exceptional circumstance to initiate this strategy, the duration of the subsequent tapering was hardly evident before markets had a hissy-fit and forced the new Fed chief to reverse all of this in November 2018 and probably encouraged by the them political boss ahead of the elections. Then, conveniently another ‘crisis’ popped up, a virus little worse than a bad flu and a mortality rate of about 0.15%, but with the right PCR cycle setting and a complicit media and big tech was able to frighten us into another emergency, which of course requires the usual liberal medication of cash and lots of it. So if you notice the sensitivity in gold prices to Fed funny money printing, you’ve probably also appreciated that the outlook for both gold and the US dollar is going to be determined by the political outcomes

Gold & Gold miners – when to buy and how to value