ITV’s turn to buy into the de Mol format dream 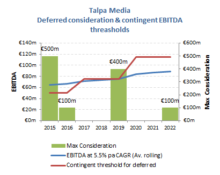 The story is an old one. Broadcaster facing erosion of its distribution monopoly buys successful production business to supplement the lack of creative output from its own in-house content origination arm. Whether it was TVSâ€™s purchase of MTM, Thames TVâ€™s acquisition of Reeves or Pearsonâ€™s serial offending with Grundy and then All American, the narrative was the same. The tale started with the presentation of the strategic imperative of developing content into a fragmenting media environment and usually concluded with the short term financial justification of EPS accretion. What was usually omitted was that the creative talent walked off with the â€˜moolahâ€™ and set up across the street in competition or just simply failed to repeat their initial success within the more constricting culture of a big broadcaster or indeed even a Telco. The original â€˜hitâ€™ series usually had a few more seasons in it before it was retired and with some judicious use of â€˜fair valueâ€™ provisioning to write down the carrying value of the acquired assets, the acquiring company could still nurse some fairly decent reported numbers into their own P&L for maybe up to 5 years. All this though was just the usual financial smoke and mirrors act to obscure the same old reality that buying a few years of declining cash flow from someoneâ€™s creative labours is not a value accretive pastime unless it can fundamentally change the creative ethos of the acquirer; not an easy task for a big commercial broadcaster.

So here we are again. ITV continues to hoover up content origination assets, this time with its acquisition of John de Molâ€™s latest wheeze, Talpa Media. Talpa, is a producer of format shows including â€œThe Voiceâ€ and we are reminded by ITV that John de Mol was also the creator of â€œBig Brotherâ€. Somewhat strangely, â€œEndomolâ€ which was the company co-founded by John de Mol and which produced Big Brother didnâ€™t merit a mention in ITVâ€™s press release on its Talpa purchase. For those that may have forgotten, Endemol was the production company that was sold in 2000 for â‚¬5.5bn to Telefonica who then sold out ultimately to a Mediaset controlled entity in early 2007 for â‚¬3.1bn. Having funded the acquisition largely with debt, the story then goes from bad to worse with debt reported to have grown to over â‚¬4bn by 2011, followed by a covenant breach and then a debt to equity swap in 2012. Okay, perhaps the omission to mention Endemol was not an accidental oversight after all! 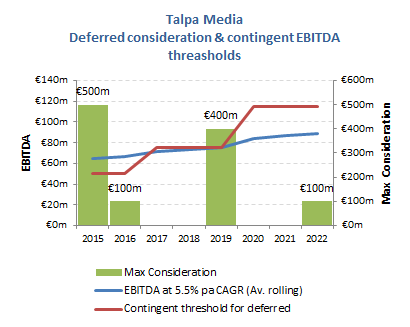 So, has ITV managed to avoid the mistakes of its predecessors and pluck out the one perfect apple? Well to answer this one needs to have some idea of what it might actually pay for Talpa. For â‚¬233m of revenues and â‚¬61m of EBITDA, ITV is paying an initial sum of â‚¬500m. Contingent on average EBITDA exceeding â‚¬50m pa for 2015 & 2016 a further â‚¬100m is due and then another â‚¬400m should average EBITDA for 2017-19 equal or exceed â‚¬75m. For the next payout however, the EBITDA hurdle for average EBITDA is raised to â‚¬115m for 2020-22, albeit the deferred element relating to this drops to only â‚¬100m. The very structure of this deal however points to the real winners in this negotiations; John de Mol (again). The big ticket is the 2nd deferred element of â‚¬400m and this can be achieved with an average annual growth in EBITDA of only +5.5% (as shown in the below chart). Given that the 1st deferred element is contingent of achieving an EBITDA that is almost â‚¬10m pa less that already achieved in 2014, one might be excused in expecting Talpa to push returns into 2016-19 by recognising additional investment in the preceding period. As for the jump in the contingent threshold for 2020-22, that is probably more to sell the deal to ITV shareholders as being a high growth business still at that stage. Excluding the last deferred element of â‚¬100m, I would expect this deal to cost â‚¬1bn, or around â‚¬800m NPV. On a 5 year average EBITDA threshold of â‚¬65m pa to 2019, this would suggest an average EBITDA yield of 8% and EBITDA multiple of over 12x. If you believe that John de Mol will manage to increase Talpaâ€™s average EBITDA by over 50% for the remaining 9% of the maximum sale value, then this may not look too demanding. If however, history repeats itself and 2017-19 marks the peak, then think Endemol, All American, MTM, Reeves etc,etcâ€¦