Oil stocks continue to reach beyond a $60/bbl oil price 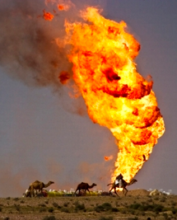 Mr Micawber it seems is alive and well over at OPEC, where the last ‘do nothing’ meeting has ended in the warm glow of oil prices being up 80% since the last event (in Dec 2015), with the narrative of a market experiencing a net reduction in non-OPEC supply of approx -740k b/d against global demand estimated to be growing by +1.2 mb/d. This however fails to recognise that for Q1 2016 at least, global supply was still exceeding demand by around 1.5m b/d and that over that past year, oil in storage has expanded by well over 600m barrels to probably around 3bn barrels. For Q2, the rebound in prices has indeed accompanied what may well have been a more neutral supply demand balance as a series of outages from Canadian wildfires (>-1m b/d) to ‘Niger Delta Avengers’ (Nigeria -0.5m b/d) compound existing supply reductions from the US (-760k b/d YoY and -390k b/d QoQ), Venezuela and Libya to offset the faster than forecast ramp up in Iranian exports (by over +1m b/d).  For such a marginal shift in supply/demand, in what may just be temporary factors and against such a record overhang in storage however, does not fully explain the extent of the price rebound. The other essential component has been the accommodative central banks, including the $1tn of new credit issuance by the PBOC in Q1, the continued QE from Japan and Europe and yet more deferrals by the US Federal Reserve of its threaten interest rate increase.

Looking ahead into the remainder of the year, OPEC and forecasters such as the IEA estimate a broadly similar pattern of falling supply relative to rising consumption eliminating the production overhang to support pricing. This however may again prove ambitious as along with the likely resumption of Canadian output will the possible recovery in output from Nigeria and in particular Libya, depending on political/military developments here. With the pace of US production cutbacks already easing as prices rise and with the prospects of the Fed finally edging up interest rates and therefore oil storage costs, expectations of an ever-increasing oil price from current levels may prove to be pre-emptive, particularly should speculators chose to unwind some of the storage overhang. 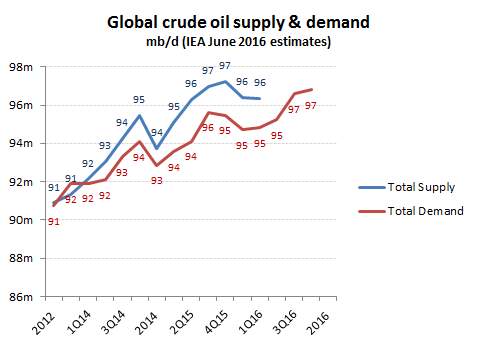 Cost cutting, a big dividend and an expectation for an early recovery in oil prices are probably all contributing factors behind a relatively shallow trough in share prices for the major oil stocks in our coverage relative to the then collapse in oil prices. This however doesn’t fully explain the comparable recovery in both series unless markets are either already discounting further increases in oil prices or believe that these companies leverage to an oil price increase will have been largely unaffected by the significant reduction in E&P budgets. In this, markets pricing of oil stocks seems to believe in having ones cake while also eating it. In our modelling, we estimate that average oil prices will need to recover to at least $60/bbl before any of the majors (BP, Chevron, Exxon and Royal Dutch) are generating OpFCF yields of 6% or more which would enable them to support their current dividend offerings and bring down their implied growth ratings back down to a more supportable +4% CAGR or below. 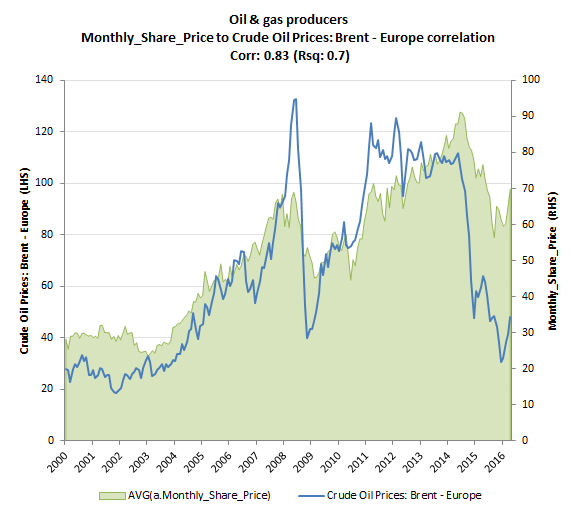 Share prices recovering from a higher base than oil prices

Full valuation analysis can be found at: https://app.growthrater.com/

A >$60/bbl oil price however, is not something I would count on as an annual average until perhaps 2018. Interestingly, the EIA’s own forecasts for 2016 and 2017 have been recently cut to $41/bbl and $51/bbl respectively, which broadly also my existing modelling assumptions for my company forecasts and valuations. 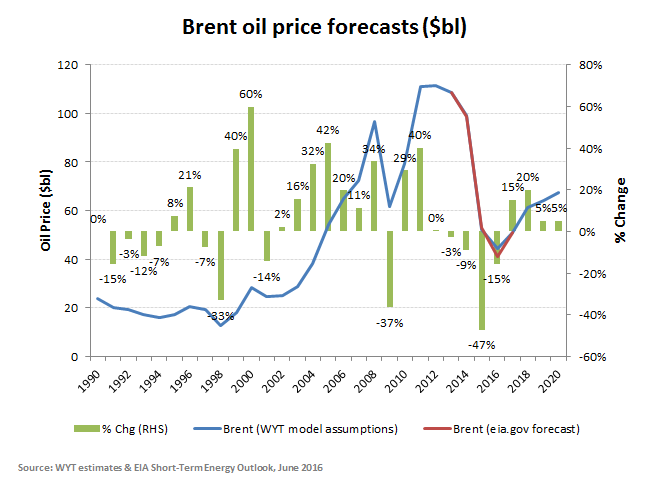 For once my estimates broadly coincide with the EIA’s