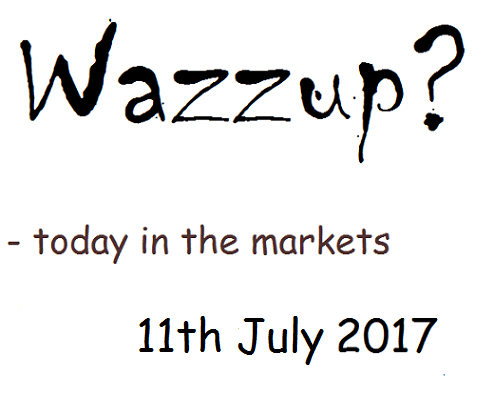 German specialist cooker manufacturer Rational took top honours today with its guidance upgrade as US chain sales continue to storm ahead while back in Brexitland, an underwhelming Q1 sales report from M&S and for Pearson a difficult attempted exit from its consumer book venture (PRH) did little to lift the gloom.

After the Q1 organic sales surge of +22% as new product offerings start to open up business with US multi-chain operators, clearly progress into Q2 hasn’t waned too much as the group issues a FY17 guidance target for sales growth to come in a around +11-13%, which excluding an approx -1% fx headwind would equate to a healthy organic revenue growth rate range of +12-14%. Although broadly matching the >+13% estimate already plugged into our model for organic sales growth this year, the fact that the group feels confident enough to commit to such a forecast when its order book visibility extends to little more than a month suggests the current trajectory remains ahead of these targets which looks set to be beaten. H1 results due on 4 August – for more see ‘Analytics’ section.

Another underwhelming trading update may be no worst that expected and already substantially reflected in the low implied growth valuation, but was hardly welcomed by markets already concerned about the impact on retailers from Brexit. The expansion of the ‘Simply Food’ stores and tailwinds from the late Easter managed to deliver a positive sales growth at =fx of +1.8%. This included the UK at +2.6%, but on a like for like basis and adjusting for Easter, UK sales were down by -1.2%, including Clothing & Home at -1.8% and Food a disappointing -0.8%, for what many had hoped would provide the growth narrative for group trading prospects. While these trends are not inconsistent with my model assumptions for this year and the current GrowthRating of under +3% CAGR is not out of reach for organic sales growth over then next couple of years, it probably means most investor interest will continue to centre on the generous dividend yield of 5.9%.

“Pearson agrees to sell a 22% stake in Penguin Random House to Bertelsmann and recapitalise the business generating total net proceeds of approximately $1 billion”.

At first glance one might be mistaken in thinking Pearson had sold 22% of its 47% stake in PRH for approx $1bn, when what is really happening is that having failed to get an acceptable price for a clean sale of the entire stake, it has had to settle for only a partial sale, with the bulk of this $1bn “net proceeds” being a debt funded dividend payout to the shareholders. Perhaps, unsurprising, the group doesn’t separately disclose to how much of this $1bn is from the dividend vs the disposal, but the admission that PRH will be leveraged up to 2.0x EBITDA ($531m in FY16) and the estimates exit EV of $3.55bn, suggests this may well be the principal component.

With its estimated enterprise value of $3.55bn, it’s not too difficult to see why Pearson has taken advantage of the current loose monetary conditions. Compared to the venture’s FY16 EBIT of $447m, this represents an historic exit EBIT yield of approx 12.6%. Assuming a 25% tax rate and 90% FCF conversion, this suggests an operating FCF yield of approx 8.5% which implies a GrowthRating of possibly no more than +1% CAGR, highlighting the unloved nature of the asset and limited demand from trade buyers. From Pearson’s perspective, having PRH borrow at possibly under 5% to pay a dividend that can be used to buy-in Pearson shares that are trading on a 9% EBITA yield helps to offset the earnings dilution on the equity component of selling 22% of PRH on an almost 13% EBIT yield.  From Bertelsmann’s perspective, the structure of the deal makes even more sense as long as it believes the business is a >=+1% CAGR proposition. Adding approx $1bn of debt suggests a tax shield worth around $250m which drops the effective EV from $3.55bn to about $3.3bn, which effectively increases the EBITA and OpFCF yields on the shares being bought in from Pearson by around +100bps. With the debt/ebitda ratio to be held at no more than 2x, this also will help to contain the funding rate and thereby maximise the margin return.

Some have described this as selling off the last of the family silver, but this was done some time back with the disposal of the FT. The low valuation and the structure of the only partial exit of PRH just confirms what markets have know for years about the attractions of consumer book publishing.