New management with a new veneer to the content strategy and a cyclical recovery in UK TV advertising have all encouraged markets to give ITV the benefit of the doubt that this time it can manage the transition from distribution monopolist to a more balanced content origination and distribution business, albeit in a considerably more fragmented and competitive environment.Â  As advertising comes off its QE and World Cup highs and content acquisitions bed down markets will need to review whether there is scope for structurally raising an already competitive operating margin of around 30% or whether the growth in demand for its originated content will be great enough to offset the prospective erosion in free to air audiences (NB 9 mth SOCI -6% YoY)and share of future advertising to support the current approx. GDP average growth rate implied by the operating free cash flow yield.Â  Acquisitions of content originators, such as Pawn Stars producer â€œLeftfieldâ€, usually sound beguiling initially, but these are invariably bought at their peak and only justify the prices if they can continue to originate new hit series. Anyone remember â€œMTMâ€, â€œReeves and Allenâ€, â€œAll Americanâ€ or â€œGrundyâ€? Nuff said!

OUTLOOK:Â  FY14 NAR growth is forecast at +5% with Studios up by approx. Â£100m after absorbing around Â£30m of fx drag. For FY15 the group is predicting improved revenues based on a positive economic outlook, an additional 2 new channels and a return to organic growth for Studios and a focus on improving SOV from investments in new scripted content.Â  Well, thatâ€™s the plan! It does however suggest additional investment in origination (and deficit financing) which may provide a margin penalty. In itself that ought not to worry markets, but only if balanced by viewing improvements, otherwise we are back to where we were a few years ago, albeit with a less stressed balance sheet if one turns a blind eye to the increased pension deficit (from -Â£362m in June toÂ  -Â£456m in September following reductions in discount rates). 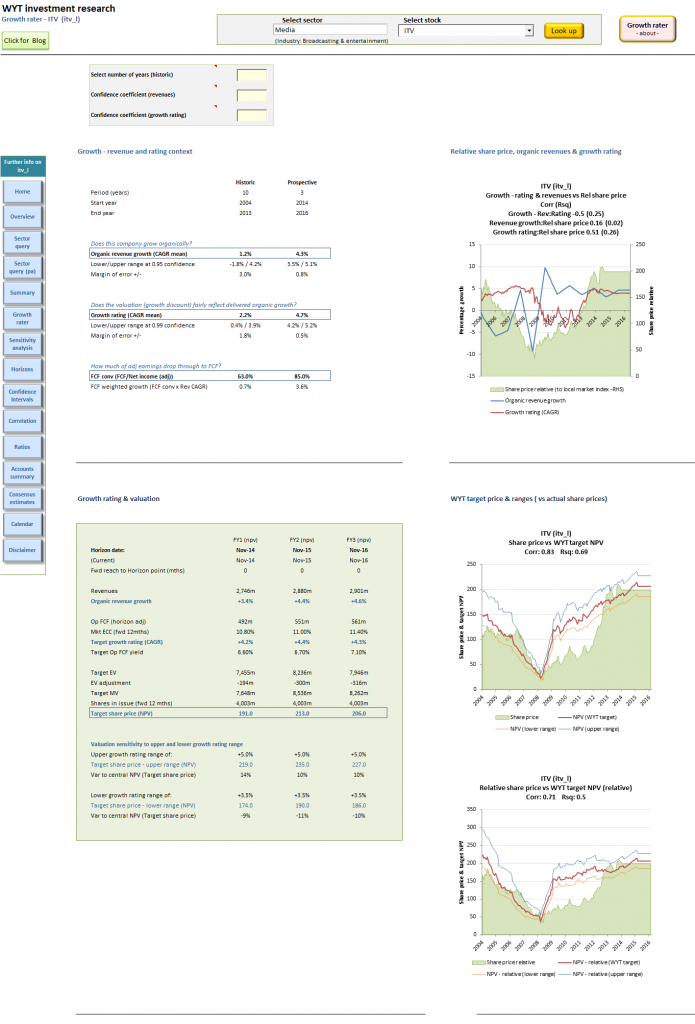